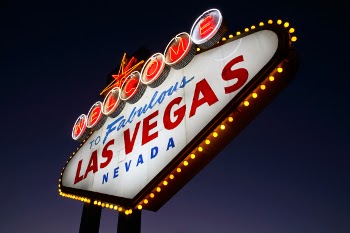 It has been a little under two weeks since I returned home from Las Vegas from my stint as a 2014 World Series of Poker (WSOP) reporter yet it feels like I was months ago that I spent most of my waking day traipsing around the Rio All-Suite Hotel & Casino looking for interesting hands to post on the PokerNews site.
While I enjoyed my time in Las Vegas, despite the length of the trip, there are a few things that I do not miss about the place the affectionately call “Sin City.” Here they are:

Being a Briton from the North of England I am not used to the weather being hot. Sure, occasionally in the height of summer the temperatures will soar to around 80F (26C), but the average temperature in summer where I live is actually only 68F (20C). Compare that to Las Vegas, where the average is 92F (33C) and temperatures after going as high as 110F (43C) you can see why I won’t miss the heat!
The Mrs asked me why I came home without a tan and the answer was simply because it was so hot I couldn’t be outside in it for more than 10-15 minutes without feeling like I was cooking.

With the entire city being constantly baked, every public building you go into is blasted with ice-cold air conditioning. While I won’t deny that stepping out of the heat and into a freezer feels superb, after a while the air doesn’t feel real, not to mention my nose was constantly bleeding from the dryness of the fake air I was having to breathe.

Not Being Able To See Outside

As I type this blog entry from the comfort of my office, which is really the spare bedroom with a desk and chair in it, I can see outside into the street. I can plenty of greenery; there is grass, plants and I can see the tops of the trees from the nearby woods.
During the week, while I am typing away at my trusty laptop’s keyboard, I often have looked outside for a few moments, usually to be nosey and see what’s going on, but also because it’s nice to actually see the outside world from time-to-time.
None of the casinos have windows in them and the massive conference halls that the WSOP takes place in are void of glass, too. This ruins any sense of time you think you may have, plus it is fucking depressing.

They say you should never look a gift horse in the mouth, whoever they is never had to eat in the Dealer Break Room (DBR). The free food in the DBR ranged from shit to downright awful, although I must admit I was partial to the odd schnitzel-type thing that appeared once a week.
If I return to Vegas and the WSOP at some point in the future, I’m going to have to stump up some extra cash and avoid the DBR and its liquid shit inducing slop like the plague.
Over The Top American Tourists
I get that people are excited to be in Las Vegas and are over the moon when they manage to win a hand of Three Card Poker, win a bet at Roulette or see the dealer bust at Blackjack, but is there any need to whoop, Yeehaw, hi-five everyone in the room or scream your bollocks off EVERY time you win a bet. No, there isn’t you set of annoying wankers, not even if you are winning a grand at a time.

The internet in the Rio at the 2013 WSOP was a complete pile of cack and almost resulted in me going postal a couple of times and definitely contributed to my alcohol intake that summer. This time around, the WSOP put Ethernet cables at all of our desks, which made me a happy Pudding. Sadly, the same couldn’t be said about the Extended Stay’s internet.
Last year I paid $30 for the extra fast broadband in my room and felt ripped off because it didn’t make one iota of difference to the snail-like pace of the WiFi so I gave it a swerve this time around. While the internet worked in my room, it may as well have not because it was ridiculously slow. The download was something like 0.3MB despite the fact there is fibreoptic right outside of the place.
In this day and age, there is no excuse for shitty internet, none at all. At least by the time I arrive home in the UK my broadband had been upgraded to 100MB and my phone downloads at 15-20MB so all is well in the world again.

Not Being Able to Have a Bath

I don’t remember any of the houses I grew up in having a shower installed in them, which explains why I am a bath person. Some people say baths aren’t hygienic because you’re laying in your own filth and to those people I respectfully say fuck you.
Baths are awesome. Baths allow you to lay back, zone out and forget about the world for a few minutes. I find them peaceful and need a nice soak now and then otherwise I start to feel shit.
It appears that people in the U.S don’t like baths if the bathtub at the Extended Stay is anything to go by. The kitchen sink at home is deeper than the bathtub at the Extended Stay. I did try and fill it one morning only to realise that when it was completely full, it still wouldn’t have gone over my cock and balls when I got into it.

One of my little pleasures at the end of a long shift was a couple of cold beers when I arrived back at the Extended Stay. Out in Vegas my main drink was Coors Light or Budweiser Platinum, two beers that are sure to get the beer aficionados slagging me off from the rooftops, but it was cheap, cold and helped me off to the Land of Nodd.
What started to piss me off, however, was the fact each of the cans were the same size and shape as a Red Bull can. Here in the UK, cans of beer are generally 440ml and a nice, chunky size. These Vegas cans were 335ml, skinny and didn’t feel like I was having a beer and reminded me of having a half-pint at the pub – which I almost always poured into an actual pint glass, a real pint BTW.

OK, this is probably going to get me flamed to hig heaven butWTF is American bacon and sausage all about? I love bacon and sausage, in fact I love most things swine. Americans are meant to, too. So why do they insist on having bacon that resembles a load of fat with a bit of pink splashed on it and then burning it to a crisp.
As for my beloved sausages, here’s a little tip for you yanks: FRANKFURTERS ARE NOT FUCKING SAUSAGES. Also, most sausages should have a decent meat content and not looks like a sausage skin full of rusk and other unknown bits of shit.

There is no place on Earth like Las Vegas, it is an amazing place, but one that is so fake and so insane that I often felt like I had been sucked into my Xbox and was a character in Grand Theft Auto.
Near the Rio was a bullet-proof vest shop which resembled Ammunation in GTA, while adverts for gun shows and shooting ranges were everywhere. Massive trucks, SUVs, flash sports cars and motorcycles ridden by riders sans helmets blast around the roads seemingly following no rules at all, while the Wal-Marts make it possible to buy a pizza, some socks, beer in stupidly shaped cans and a fucking AK-47 or Uzi.
Now I know bad things happen in the UK, but can you imagine how fucked up the place would be if we could all carry guns, buy guns and flak-vests in shops and basically do what the fuck we wanted. It’d be like Vegas.