WPT Magazine asked me to write an article with 10 tips for playing MTT SNGs. It was published in this month’s magazine (September 2013). 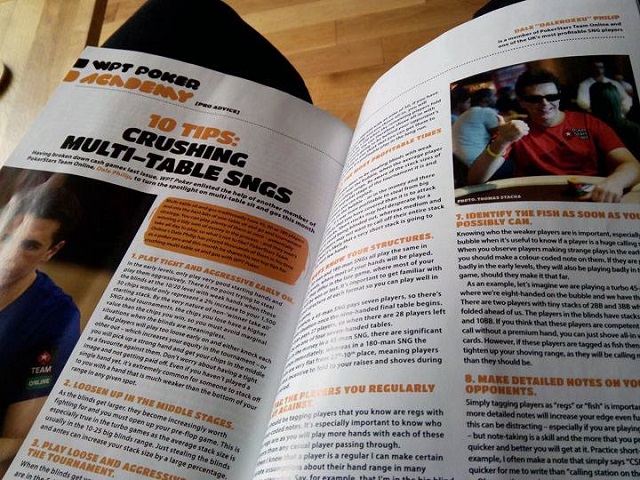 For those who wanted to read it but were unable to get a copy of the magazine I’m publishing it here on my blog too. The article is aimed at advanced-beginner to intermediate players, so it may not be for everyone, but I hope you find some information that’s helpful to your game.

Multi-table sit and gos traditionally have 45, 90 or 180 players and mix the best bits of one-table sit and go and tournament strategy. You can play plenty of them at once – potentially winning a tidy sum of money in the process – and they won’t take all day to play, so what’s not to like? PokerStars Team Online’s Dale Philip has played thousands of them in his time as a poker pro and this month he shares his ten top tips for crushing multi-table sit and gos with WPT Poker.

1. Play Tight and Aggressive Early On.

In the early levels, only play very good starting hands and play them aggressively. There is no point trying to steal the blinds at the 10/20 level with weak hands when those 30 chips would only represent a 2% increase to your 1,500 starting stack. By the very nature of non-‘winner take all’ SNGs and tournaments, the chips you lose have a higher value than the chips you win, so you must avoid marginal situations when the blinds are meaningless.

Bad players will play too loose early on and either knock each other out – which increases your equity in the tournament – or you will pick up a strong hand and get your chips in the middle as a favourite against them. Don’t worry about having a tight image and not getting paid off. Even if you haven’t played a single hand yet, it’s extremely common for someone to stack off to you with a hand that is much weaker than the bottom of your range in any given spot.

2. Loosen Up in the Middle Stages.

As the blinds get larger, they become increasingly worth fighting for and you must open up your pre-flop game. This is especially true in the turbo games as the average stack size is usually in the 10-25 big blinds range. Just stealing the blinds and antes can increase your stack size by a large percentage.

3. Play Loose and Aggressive Late in the Tournament.

When the blinds get very large and stack sizes at your table are in the 5-15 big blinds range, it becomes necessary to play extremely loose and aggressive and steal blinds by shoving in your whole stack to maximise fold equity.

For example, at level 300/600 with an ante of 50, if you have a stack size of 5,400 (9BB) and you shove all-in, you will increase your stack by 1,350 when the remaining players fold – that’s a 25% increase! You can therefore shove all-in with a range of hands that is going to be behind your opponent’s calling range so long as you think that you can get them to fold enough to make it a profitable play in the long run.

4. Select the Most Profitable Times To Steal.

The most profitable times to be stealing blinds with weak hands will be on or near the bubble, when the average player tightens up their calling range. Be aware of the stack sizes of your opponents and what stage of the tournament it is and look for situations you can exploit.

When you are on the bubble – or in the money and there is a pay-jump – it’s way more profitable to steal from big or average stacks that you have covered than it is to attack the shortest stacks. Short stacks may feel desperate for a double-up to avoid being blinded out, whereas medium and big-stacked players may not want to call off their entire stack pre-flop when it’s likely that a very short stack is going to bust in the next few hands.

For instance, a 45-man SNG pays seven players, so there’s a bubble situation once the nine-handed final table begins. A 180-man pays 27 players, so when there are 28 players left you’ll be on one of four seven-handed tables.

Once in the money in a 45-man SNG, there are significant pay jumps immediately, whereas in a 180-man SNG the payouts are very flat from 27th-10th place, meaning players have less incentive to fold to your raises and shoves during this period.

6. Tag the Players You Regularly Play Against.

You should be tagging players that you know are regs with colour-coded notes. It’s especially important to know who the regs are as you will play more hands with each of these players than any casual player passing through.

When I know that a player is a regular I can make certain accurate assumptions about their hand range in many common scenarios. Say, for example, that I’m in the big blind and it’s folded around to the small blind who goes all-in for effective stacks of 12BB. In this scenario, I expect a regular’s range to be extremely wide and a random player’s range to be a lot narrower than that. So having information on the type of player I’m up against allows me to adjust my calling range correctly in this scenario.

7. Identify the Fish as Soon as You Possibly Can.

Knowing who the weaker players are is important, especially on the bubble when it’s useful to know if a player is a huge calling station. When you observe players making strange plays in the early levels you should make a colour-coded note on them. If they are playing badly in the early levels, they will also be playing badly in the late game, should they make it that far.

As an example, let’s imagine we are playing a turbo 45-man SNG where we’re eight-handed on the bubble and we have the button. There are two players with tiny stacks of 2BB and 3BB who have folded ahead of us. The players in the blinds have stacks of 15BB and 10BB. If you think that these players are competent and won’t call without a premium hand, you can just shove all-in with any two cards. However, if these players are tagged as fish then you should tighten up your shoving range, as they will be calling much wider
than they should be.

8. Make Detailed Notes On Your Opponents.

Simply tagging players as “regs” or “fish” is important, but making more detailed notes will increase your edge even further. At first this can be distracting – especially if you are playing lots of tables – but note-taking is a skill and the more that you practice it, the quicker and better you will get at it. Practice short-hand writing. For example, I often make a note that simply says “CSB”, which is much quicker for me to write than “calling station on the bubble”.

Observe the regulars in your game very closely as these are the players that you will be playing with a lot. You want to know how tight or loose they are in certain common spots compared to an average regular. For the players that you play against the most, look back through hand histories of games that you’ve played with them and you are bound to find things that you missed while playing, especially if you are playing a lot of tables at once.

The bankroll that you need to play MTT SNGs depends on many variables related to the individual player. If you are someone that plays just one table at a time and can easily reload more money into your poker account, then clearly a ‘bankroll’ of just one buy-in is enough to get you started.

If you are someone who is grinding for a living, playing 20 tables at a time and you can’t afford to reload if you bust your account, then you ought to be thinking about a far more conservative range of perhaps 200 buy-ins or higher.

Meanwhile, for players who can’t easily reload but want to take an aggressive approach, they could play with, say, a 100 buy-in bankroll and simply move down a buy-in level if their balance was reduced to less than 50 buy-ins for their current stakes, thus allowing them to maintain their style without compromising their bankroll.

The best players can play with fewer buy-ins because their edge or expected ROI% means that they will have smaller downswings than a marginally winning player. Remember, no amount of buy-ins is enough to stop you going bust in the long run if you’re not a winning player, so make sure you’re honest with yourself before you begin.

10. If You Want to Make a Serious Profit, Volume is Key.

If you are playing poker for fun and a little bit of profit then it’s fine to single-table an MTT SNG now and then. For those with a grinder mentality looking to earn large sums of money from these games, volume is the key. Nobody ever got rich by winning a single $15 180-man SNG, but plenty of people have earned hundreds of thousands of dollars by mass grinding SNGs at these buy-in levels, including myself.

Turbos are the best games for grinders. For most good players, ROI % will be lower compared to regular-speed games, but with shorter games, their hourly earnings rate will be higher overall. However, you must be able to multi-table well. Since MTT SNGs are mostly a pre-flop game in the later levels (when you’ll be most active), they are very easy to multi-table. As you play more tables your edge per game will be
lower, but, again, your hourly earnings should increase.

There’s a point for every player where adding any more tables will reduce their edge to a level where their hourly earnings decrease. This varies from player to player, so start by playing the number of tables
you are comfortable with, then try adding one or two at a time while keeping track of your results.