I enjoy reading the blogs of other poker players as much as I do writing my own. I want to share with you my recommendations for the best blogs to follow through 2013.

The 20 bloggers that I’ve listed aren’t just talented poker players but also have many other attributes such as cool interests outside of poker, strong personalities, writing / video talent, sense of humour and charisma that shows in the quality of their blogs. And, importantly, they update regularly!

I’ve chosen a wide array of players. From old school live tournament players, to high stakes cash game players to small stakes SNG players. Some you won’t have heard of, some will play games that you have not much interest in, but all are worth bookmarking or adding to your RSS reader.

In no particular order….. 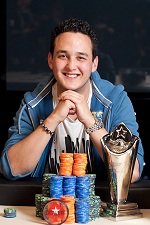 Rupert is a young UK player that plays as much live as he does online. Well, he’s aiming to play 6,000 online tourneys and 50 live tourneys in 2013 – I reckon that’s pretty even in terms of hours played!

I hope that in 2013 those interesting things include more of winning EPTs, going to cool places, doing awesome things and eating delicious food, and less broken bones!!! 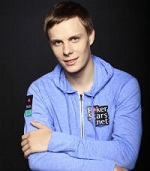 Innerpsy regularly posts well produced videos of his poker and travel lifestyle on YouTube in a video series that he calls ‘Poker 4 Life‘. He’s already made 14 videos, with the latest one being from Amsterdam.

He’s off to the PCA right now so we can expect another video update soon. I just hope there’s English subtitles on this one. Yeah, Innerpsy is Russian, and so are his videos. 🙂

Subtitles please Innerpsy, and we’ll all follow your adventures in 2013. 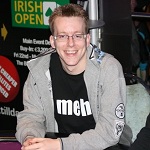 The Atkinator is not only a great online SNG and MTT player but also a [X] fantastic blogger and [   ] talented rapper. He juggles all that with regularly getting his wife pregnant and and supporting his family.

It can’t be easy but it certainly makes for an interesting blog.

He’s just put up a review blog for 2012 with loads of graphs and stats so go check that out and follow him through 2013. 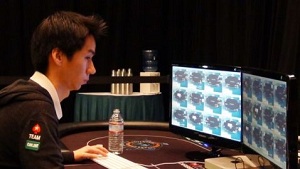 Nanonoko won’t need much of an introduction to most of you, but in case you don’t know – he’s the guy that wins all the monies at poker. (If you really do need an introduction to him you could watch the short film documentary about him.)

Randy prefers to blog through the medium of video (we call that ‘vlogging‘). He’s as talented at making funny, interesting and informative videos as he is at playing poker and that is really saying something. Some of his videos include hand reviews and strategy discussion so if you follow his blog you may just learn something. 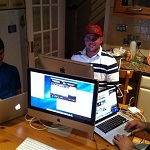 The ‘Why Not Grind‘ blog is written by 5 Heads-Up SNG players with the concept of ‘5 poker players, 1 year, $1 Million‘.

These five players, that include ‘Giabest’, ‘Flippetyflop’, ‘Millz_uk’, ‘Mocachoca89’ and ‘Rocmar87′, are planning to win over a million dollars at the tables between them in 2013. 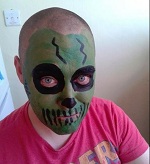 Poker player and writer Puds has just re-launched his personal blog for the umpteenth time.

The bloke has a great sense of humour and way of looking at things. He writes quite decently too. Although so he bloody should, it is his job after all! 🙂

Like a lot of overweight poker players he’s started off his 2013 blog with talks of losing weight and getting fit. I’ll be following his blog throughout the year but I’m not convinced I’ll still be reading about jogging and salads come April. Good luck to him though, getting in shape is one hell of a tough grind. 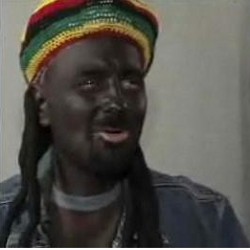 KidPoker is one of the few established “old school” poker pros who embraced the internet and social media. He’s been discussing all things poker related on the internet since way before the TwoPlusTwo forums even existed as he was a regular contributor in the rec.gambling.poker Usenet newsgroup.

In more recent times he’s become the most followed poker player on Twitter and he regularly blogs and interacts in the forums at Full Contact Poker.

Daniel is a highly respected figure in the community and a person that always has an opinion on poker related issues. He’s absolutely not afraid to speak his mind either, even if it might upset some people (hi Annie!). This makes for blog updates that are not to be missed.

In the last year or so he’s moved away from written blogs and more towards video blogging, with a regular vlog series that he calls ‘The Weekly Rant‘. The videos, which he makes all by himself, are well produced and very entertaining. I always look forward to the next KidPoker rant. 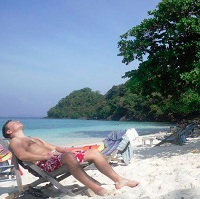 Amatay, the English fish, was putting out some great blogs last year when he was in Thailand and travelling around Asia. He then went back to [  ] sunny England and retired from blogging. Booo!

That didn’t last long. He’s back in Thailand and back blogging about his [   ] exciting days lying on different beaches sunbathing and making a living by running absurdly hot at tourneys in the 5 hours per week that he plays online poker.

Commonly known by followers of my blog as the ‘Second Best Blogger in the World‘, Amatay is well worth following in 2013. Neil has been a highly respected member of the UK poker community for many years now, decades even. Similar to Negreanu, in that he’s an oldskool player that has embraced social media and blogging, and been very successful at it. I’m sure he shares some of Daniel’s poker skills too.

I enjoy reading about the goings ons at the poker festivals across the UK and Ireland (and beyond) that he travels to frequently. He describes both the good and the bad of these events. If a tournament is well organised he will give it deserved praise but when there are any issues such as bad structures, rude floormen or players with bad etiquette then you’ll be sure to hear about it in Neil’s blog.

When I started to read one of his blog updates last year I knew it was going to be a good one when it started with:

“Within 60 seconds of this year’s London EPT I knew I wasn’t going to enjoy myself. I only began to wonder why I paid £100 registration and 3 percent of the prize pool to play the first side event when the floorman told me to get my coffee off the table. My mother would have asked him what the magic word was.”

In his first blog of 2013, entitled ‘Grumpy Old Men‘, he talks about giving a punk kid a dressing down for berating a recreational player. Good stuff! 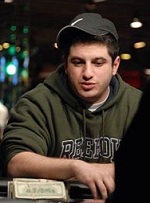 Phil needs no introduction, so I won’t bother giving him one.

Although he hasn’t blogged for five months he did write some of the best written and most discussed blog posts of 2012. Certainly a man that goes for quality over quantity when it comes to blogging.

When Phil writes a blog post it actually becomes ‘news’. Poker media report on it and there’s quickly an NVG discussion thread on TwoPlusTwo.

There’s no doubt that we’ll be reading more high quality updates from Phil in 2013. 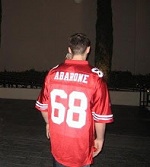 One of my favourite and most visited blogs of recent months has been from SNG grinder abarone68.

Aaron is an American refugee, having fled ‘the land of the free’ in order to continue making his living playing online poker from Chiang Mai, Thailand.

The updates on his blog that he calls ‘The Rant’ are short, regular, plentiful and include loads of graphs and photos. He’s pushing himself to grind a much higher volume of poker in 2013 but hopefully he’ll still have plenty of time to rant on his blog. 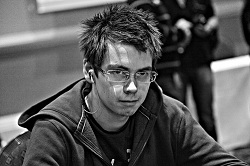 Dave has one of the best poker blogs online right now. He’s an English bloke that plays mid to high stakes cash, both online and live.

His blog presents a nice balance between the poker swings (illustrated by graphs and humorous pics) and his lifestyle, with tales of his trips to Vegas and other cool places.

If Dave’s blog is half as good this year as it was in 2012 it’ll be well worth following. 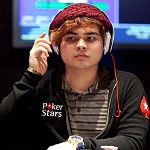 AWice was the first Supernova on PokerStars this year. It took him only 39 hours. Yeah, seriously!

He’s started this year by earning VPPs at an absolutely insane pace but it will be interesting if he can keep up anywhere near that kind of pace for 365 days. Unfortunately he doesn’t post any graphs of his results so we can’t follow the massive swings that he’s likely going through when playing such a high volume of high variance games. 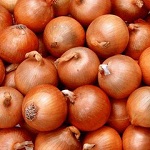 His blog has a ‘daily graphs’ section and a VPP counter. So you can easily follow his swings and his progress in detail. I’m looking forward to following Ryan’s hyper grind in 2013. 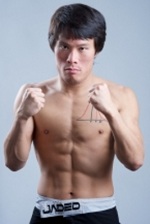 Terrence is an accomplished poker player, beating up his opponents at limit holdem with WCOOP and SCOOP titles to prove it. Away from the table he’s still giving people a beating, as he is an MMA fighter, and a pretty damn good one at that.

Having such a cool hobby / second career makes him one of the more interesting poker players to follow. His blog updates detail the insane training and dedication needed to succeed in the world of MMA and there’s the occasional poker content in there too. 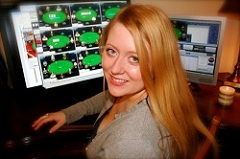 Katie is an online MTT and MTT SNG player, poker writer and the better half of poker coach, staker and  author Collin Moshman.

Another refugee from the ‘Unfree States Of America’, Katie travels from her home in Las Vegas to play online from the freedom of Rosarito, Mexico.

Katie has been blogging and writing about poker for a long time and has become pretty darn good at it. She takes the ‘quality over quantity  approach to blogging, with around one high content, high quality blog update per month. So we can surely expect at least 12 great updates from her in 2013. 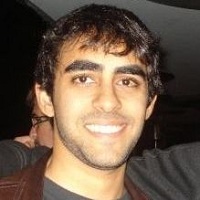 Aussie Roy grinds PLO on PokerStars and produces well written blog updates that are supplemented by some nice graphs and photos.

The poker players with the interesting hobbies, who do cool stuff away from the poker tables, are naturally the ones with the best blogs. Roy’s passion for food makes an already good blog bloody great in my opinion.

Talonchick is a mid to high stakes Limit Omaha Hi/Lo cash game player. If you need an introduction to her then check out her Team Online Short Film.

Adrienne’s blog updates are always fun to follow and many of her posts are in the form of videos blog.

To all cute, blonde female poker players out there – we really do appreciate it when you make videos, thanks 🙂 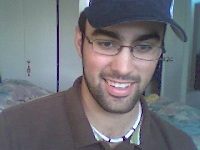 SNG players will know Sippin_Criss well. He’s been around since for forever, seemingly never getting tired of eating up the fish in the small stakes SNGs.

Well in 2013 he’s upping the ante by playing higher stakes and attempting to earn the 1,000,000 VPPs needed to obtain Supernova Elite status. “I won’t million”.

Good luck to Brendon. He’s a very talented poker player with a great sense of humour so his blog (or rather progress thread) will be fun to follow in 2013. Let’s just hope that he doesn’t post any photos of his bare naked arse (again!).

I’m not exactly sure who runs this blog but it’s bloody hilarious and updated super regularly.

The updates consist of a short one line sentence that represents the experiences of a poker player, along side a hilarious animated gif.