Talking about good staff, I always liked the casino back in the old “Isle” days, they had some great dealers. Such a good laugh in the old poker room, though I wouldn’t have enjoyed trying to supervise these four!

What I will comment on is when G Cov have made dramatic changes to the schedule.
To improve things I personally would just make small changes to the comps and see what that does, then tweak them again over time until you get it just right.
Take what happened to the Saturday 8.30 comp. It used to be freezeout (FO) with a 50k starting stack and a 15 minute clock. It actually got decent runners. I only played it occasionally but it always seemed to have about 50 entries.
So what small “tweak” did they make? They changed it to a re-buy with a 5k starting stack!
That comp lasted a month and now it’s been changed back to a FO with a 25k starting stack with a 20 min clock. But it has an add-on for 15k so effectively a 40k stack.
I would have changed the 50k down to 30k and upped the clock from 15 to 20 mins for a month or so to see what that did.
One change that I do dislike at G Cov is the number of comps that have an “Add-on” at the break. Other casinos are doing this more and more these days and I personally hate it. They are so scared of not making the guarantees that this is becoming more commonplace. I think it’s 6 out of 7 nights at Cov now. Star City in Brum does this for every comp now.
One of the reasons I go to Cov on a Friday so often is that it’s a relatively cheap night out for £30 (+£5) for an excellent structure. But when it becomes a £65 comp I may as well drive up to DTD and play a £100 comp. Also £65 gets a bit steep for the casual player to play in week in week out.

The last time I played on a Friday I started well and went from the 10k start up to 20k, but all that hard work went out the window when nearly all the players at my table took the add-on and I was left with no choice but to take it as well to maintain my advantage.

So the Gala is limiting it’s high spenders from spending and the G Cov is asking it’s low spending clientèle to spend double what they used to! It just doesn’t make sense to me.
Back to the Future
Another topic that’s had more comments than most on the MPF Facebook Group was the Genting Stokes decision to stop late entry to all their poker tournaments. This was like a trip down memory lane for me.
I remember the days of racing up to the Broadway about 10 years ago driving like the Stig to make sure I got in before the comp started.
Late entry for poker tournaments was a big step forward for the game. DTD, not my favourite place to play it has to be said, is responsible for so many improvements in the game over the last five years and this is certainly one of them.
Genting Stoke reversed the decision pretty quickly, I think that lasted about a week before they realised their mistake. They had so many people moaning about it on Facebook etc.
Playing like the old days!
Just a quick mention of when I played the Gala £50 comp for the 4th time. I really did want to cash so I played quite “defensive” right from the start. I played so tight in the later stages I was ashamed of myself to be honest. I’ve haven’t folded so much for years.
I wasn’t bothered about the £80 min cash but I just wanted to say I’d cashed 4/4 as I’d posted about it on Facebook before the tourney started.
I was a very short stack from about the time we were down to 30 players. I folded 99 pre fortunately as someone had JJ and I folded 44 in a spot when normally I’d have taken a flip to try and double up.
With 17 paid I was quite nervous when we got down to 20. I somehow managed to limp to min cash when I finally busted shoving my 4bb’s.
I remember when I used to play like that all the time!
Byron gets a mention 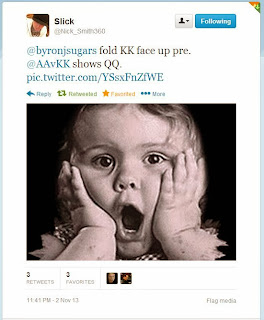 2015, Its all gonna change!
A big factor in my choice of where to play is “how long will it take me to get there?” I rarely go to DTD as it’s an hour and a quarter to an hour and a half away. I hate the drive home from any casino when I’ve busted but driving back from there just makes it seem worse.
G Cov I can do comfortably in 35 mins, Gala and Broadway should be less but the traffic is always terrible in the centre of Brum and Walsall & Star City is about 40 mins.
But from 2015 there will be a casino that will take me just 20 mins to drive to and I feel if they do it right it will suck the life out of every Midlands poker room.
The New Luxury Genting Casino at the NEC should change the face of Midlands gambling once it opens. If they get the right card room manager (There is only 1 choice for me) then it will mean I rarely need to go anywhere else to play after it has opened.