After my poker trip to Marbella I returned home to Bangkok with far fewer commitments and much more free time.

I used that free time productively – by dating pretty girls. Eventually I met a pretty girl that actually had a personality and that I actually enjoyed spending time with. Like me, she had a lot of free time on her hands, as she wasn’t due to start at university for another month. I suggested that we make the most of our freedom by taking a short vacation to Chiang Mai together.

We flew to Chiang Mai with Nok Air, which is Thai Airways’ domestic budget airline. It was certainly budget in terms of price, with a promotional fare of 900 THB (£17.45 GBP / $27.27 USD) each way, but was pretty much like a regular airline in every other way.

There were none of the hassles that one has to put up with when flying with the likes of Ryanair or easyJet in Europe. No having to check in online, print anything out, stand in long queues, be stuffed into a bus like cattle to get the plane or pay extra for every little thing. The 900 baht fare included a 15 kg checked bag allowance and a hot pastry snack and water during the flight.

It gets better. Over the last few months Nok Air have been rolling out a free in-flight WiFi service on their planes. Free unlimited broadband internet for all passengers during the flight. This is absolutely astonishing to someone who’s expectations of a budget airline service are rock bottom due to many negative experiences on the aforementioned European budget carriers.

For our stay I booked one of the best hotels in Chiang Mai, the Dusit D2. I got a great deal, paying 2,900 THB (£56.23 GBP / $87.96 USD) NET per night for a club floor Deluxe room, which was around 50% less than the usual best rate. Even taking the massive discount into consideration, 2,900 baht per night is still quite pricey by local standards. That’s despite the fact that it wouldn’t get you into anything but the most basic hotel rooms in most cities back home in the UK.

If I was travelling alone I’d have gone for a more mid-range accommodation at less than half the price, but since I was travelling with a girlfriend and only staying for a few nights it was worth splurging on a 5-star hotel.

After checking into the hotel we spent a few hours in the late afternoon exploring the city. Chiang Mai is situated in a mountainous region in the north of Thailand so it has a climate that makes walking a lot more comfortable than in Bangkok. Don’t get me wrong, it’s still hot and humid, but far less so than Bangkok which the World Meteorological Organization crowned ‘the hottest city on earth’.

After a relaxed walk around the city we visited the large Night Market that was beside our hotel. There we enjoyed excellent foot massages costing just 100 THB (£1.93 GBP / $3.03 USD).

For dinner we found a popular local restaurant where we sampled the Chiang Mai speciality known as Khao Soi. 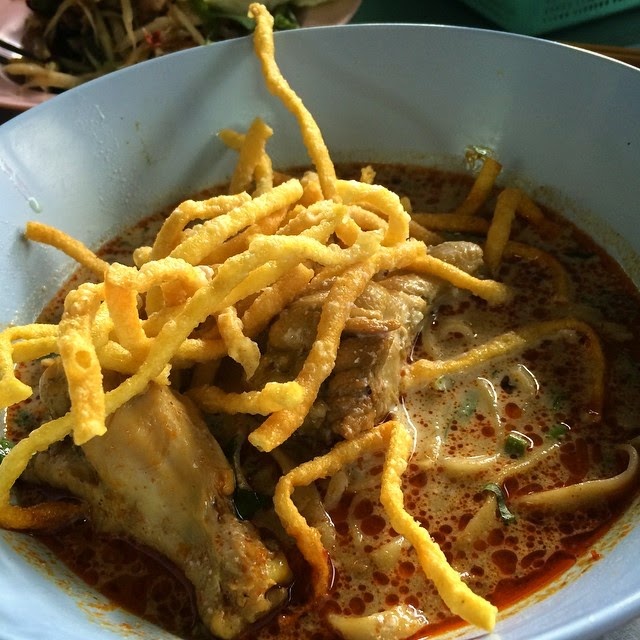 After a great sleep in the incredibly comfy bed at Dusit D2 we woke up bright and early to travel into the countryside where we spent the day at an elephant sanctuary. I did a lot of research before deciding on which sanctuary to visit, which was important as most elephant sanctuaries in Thailand are places where these wonderful animals are regularly beaten or made to do stupid unnatural things purely for the entertainment of tourists.

At Ran-tong Save and Rescue Centre they purchase elephants that have been abused, either used as work animals or exploited for entertainment, and give them a better home where they are loved and treated kindly and with respect. There’s no heavy chains, sticks or hooks used to control the elephants, or big chairs attached to them that hurt their backs due to pressure being applied to the same point constantly, or being made to do stupid stuff like play football or paint pictures purely for the entertainment of tourists.

Ran-tong is quite a bit more expensive than the many sketchy elephant sanctuaries, at 4,800 THB (£93.39 GBP / $145.99 USD) for 2 people / 1 elephant for the full day, but I felt that it was worth paying to support a sanctuary that is actually caring for their elephants rather than hurting them.

We were given a 13 year old boy elephant named Superman for the day. The elephants age pretty much matches with humans in terms of maturity. Out of all the elephants he was the one with the strongest personality and was quite a mischievous kid as I found to my disadvantage when he picked up piles of wet mud with his trunk and started throwing it at other elephants. I got a face full of it when he through it over his back. When we got to some open area he decided he wanted to race against another elephant and started running, while I was on his back. Fun but a little scary!

We spent the day trekking around the countryside with Superman and his mahout controlling him by shouting commands. The mahouts have a special bond with their elephants and are the only ones that the elephants will accept instructions from.

With the sun beating down in the afternoon we took the elephants to a small lake to bathe and cool down.

We then had many further stops for the elephants to rest and us to feed them. They eat A LOT. Adult elephant can eat over 100 kg of food per day. After so many times feeding the elephants, the staff at the sanctuary fed us – Khao Soi! Yum! If I was able to eat 100 Kg of it, I certainly would have.

After a day with elephants we spent the next day with animals of a more carnivorous nature – tigers. *gulp*.

We visited the Tiger Kingdom ‘sanctuary’ where visitors are allowed to get up close to these ferocious animals. Again, this was a place that I did some research on before visiting, to make sure that the animals were not chained up, drugged or mistreated in any way. That was all true but after experiencing the place first hand I left with negative feelings.

Tiger Kingdom was much smaller and more busy than I had expected and it just felt like one massive tourist trap. There were literally hundreds of sweaty white people hanging around outside small tiger pens to have their 15 minutes of posing for photos with the tigers. Every idiot’s photos looking exactly the same as the previous idiot’s photos.

Well count me in as one of those idiots. Unlike everyone else I didn’t just sit around near the tiger’s ass for safety, I actually gave it a proper good cuddle, but I guess that just makes me an even bigger idiot.

The tigers at the sanctuary were all quite docile and showed little interest in playing. But from a safety point of view maybe that was a good thing. I asked one of the trainers why the tigers are all so tired and he assured me that they absolutely don’t drug the animals. They just keep them extra well fed and tigers naturally aren’t active until night time when visitors aren’t allowed anywhere near them.

Unlike the elephant sanctuary I visited where every elephant was a rescued animal, every tiger at Tiger Kingdom was bred and raised there. I’d call that more of a ‘tiger factory’ than a ‘tiger sanctuary’. Tigers are being produced for the sole reason of making money from tourists. It just didn’t feel good and I felt quite guilty about being there and supporting their business with my entrance fee.

At a place like this I try to imagine what life is like from the animal’s point of view. If I were a tiger would I prefer to live for up to 15 years running around in the wild or for up to 20 years in Tiger Kingdom sleeping, eating and posing for photos with stupid tourists all day?

I’d certainly prefer the former. But I guess that if any of these tigers weren’t bred at Tiger Kingdom that they wouldn’t be alive at all. So if I was a tiger living at Tiger Kingdom I think I’d just enjoy all the rolling around, sleeping and eating all day until I’d eventually get bored and decide to do something fun like maul a tourist.

In other animal-related activities, we visited Chiang Mai Night Safari. It can be difficult to find fun stuff to do at night time if you don’t want to drink alcohol so the night safari seemed like a good plan.

The night safari is basically like a zoo except the animals are mostly free to roam around. You’re not allowed to walk anywhere but you get driven though the massive park on a bus with the driver giving commentary.

It was a fun, interesting and the animals seemed to be happy and healthy.

On the day we flew back to Bangkok we had a few hours to kill between having to check out of the hotel and go to the airport. It was early afternoon and the sun was blazing so we wanted to go somewhere indoors with air conditioning. We discovered ‘Art in Paradise‘ – a 3D illusion art museum where you can interact with the paintings.

Hanging out at a 3D Art Museum.

It was a lot more fun than I expected and it turned out to be the perfect place to take an 18 year old Thai girl who loves nothing more than taking photos at every opportunity she gets. Ok, I was taking a lot of photos too!

Unfortunately it was one of those annoying places with dual pricing. Entry to Art in Paradise is 180 THB (£3.51 GBP / $5.46 USD) unless you’re foreign in which case you have the privilege of paying 300 THB (£5.85 GBP / $9.10 USD). I was on a tourist visa at the time so had to stump up the whitey tax but 300 THB still represents good value for 3 hours of entertainment.

I’m happy to say that I’m now on a student visa in Thailand and I’m finally getting the Thai price at these kind of places.

I enjoyed the short visit to Chiang Mai and wasn’t bored for a single second that I was there. I can see it being a place that I’ll return to many times in the future as it’s such an affordable location to travel to and stay and there’s plenty of stuff to do there. Not to mention plenty of delicious Khao Soi.