Last week I travelled to Spain to play the UKIPT / Estrellas Poker Tour Marbella as a member of Team PokerStars Online.

During the UKIPT Marbella there was a screening of the Spain v Holland match of World Cup 2014 at the hotel with unlimited free drinks for everyone.

I went there to support Holland, even knowing that would make me Mr Unpopular with a 95% Spanish crowd there.

I didn’t do that just to “troll the locals” as some have suggested. The Dutch are my ‘second team’. You’ll find that every Scottish person has a ‘second team’, as a result our own team being less than world class and failing to qualify for major championships.

I’ve been a Holland fan since I was a kid when legendary Dutch coach Dick Advocaat came to manage my team, Rangers, bringing with him some excellent Dutch players such as Giovanni van Bronckhorst, Ronald de Boer, Michael Mols and Fernando Ricksen.

During the last World Cup 2010 in South Africa I was there supporting them. 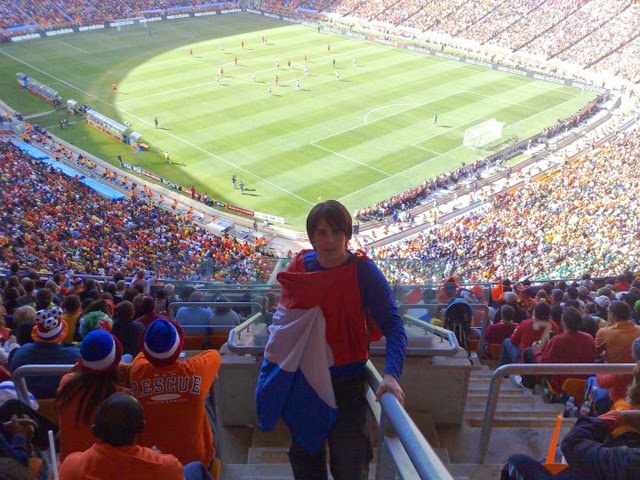 And we all know what happened in 2010. Spain defeated Holland in the final.

Roll forward four years and the chance for revenge presented itself in the first match of Group B, Spain v Holland. I was really excited for this match and watching a massively important football match with a large crowd is the next best thing to being in the stadium. It’s all about the atmosphere.

So Spain went 1-0 up and all the Spaniards went wild, while the rest of us had to sit and take it. Sigh, I had already busted the main event of the pokers at the start of Day 2 earlier in the day and it looked like I wasn’t going to have any joy with the football either.

Then Robin van Persie scored an incredible equalizer with a diving header and it was our turn to go crazy. And this is what got me in trouble. Not the fact that I was screaming or jumping up and down but that during the celebration I was doing the “get it round ye” gesture (like “get it up ye” but from the side) that is very commonly used in Scotland to mean “take that!” when inflicting defeat on an opponent at any type of game.

Play pool or darts or go to any football game and you’ll see that gesture used between friends and rivals. I didn’t have my middle finger up, or two fingers up, or any fingers up. My fist was closed the whole time. I wasn’t saying “fuck you” and making a ‘fuck you’ gesture, I was saying “get it round ye” and getting it right round them with the ‘get it round ye’ gesture.

While I admit that this isn’t exactly a polite gesture it’s incredibly normal for a football match and all I was trying to do was have some fun and banter with the opposing fans. I was smiling and not acting aggressive, not trying to offend anyone. How anyone can feel offended by someone waving their fist is beyond me. Have these people ever actually gone to a competitive football match before?

I managed to get a copy of the video from PokerStars so I’ve uploaded it for all to see:

Not exactly my finest moment, looking back at it in the cold light of day. Considering that I am, sorry was, a PokerStars sponsored player and it was a PokerStars event I should have known that I’d be held to a way higher standard than anyone else. But I was in the moment, immersed in a fantastic game of football, and acted just as I would have if I was in the stadium.

Like I say, I wasn’t trying to offend anyone, just have some standard football banter with lads from the rival side. It’s not tennis or golf, I’m not going to politely clap or tip my cap. It’s football and I’m a passionate football fan.

Everyone was drunk off the free drink and it was a good friendly atmosphere right up until the equalizing goal. The Spanish fans were basically friendly up to the point where they stopped winning, then they weren’t so friendly any more.

Holland then went 2-1 and then 3-1 up and realising that I overdid it for the first goal I just held my hands in the air and cheered.

Then Spain scored another “goal” and 20 Spanish football hooligans suddenly got out their seats and charged towards me at full speed. A big hairy one that looked like Bluto pressed his chest against my chest almost knocking me over and then butted heads with me. I pulled back and kept repeating “don’t touch me, don’t touch me”. I’m all for banter but what these guys did was try to escalate it into physical violence. I was fortunate there was security there to send them back to their seats.

The fat Bluto guy even had the cheek to start complaining to the Spanish PokerStars tour manager about me right after he did that. As if what he just did wasn’t 100x worse?

When the hooligans all sat down they realised that the goal they celebrated so emphatically was disallowed. A lot of faces as red as their shirts. Oops.

The embarrassment must have put them on complete monkey tilt as my phone started buzzing with twitter notifications. They were all sitting in their seats, threatening me with violence and giving me personal insults from their phones. So utterly lame.

They just took it way too far. All I did was celebrate a goal. I hadn’t done anything else after what was shown in the video. Even though I stopped celebrating, they didn’t stop sending me abuse.

The next night we had another big screen showing for the England game. There were tables of English supporters next to tables full of Scots and Irish, all calling each other c***’s and the same gesture I used was used 100 times by dozens of people, and it was all fun and games.

England got beat and the “Scottish Bastards” and the “English C***s” all went into town together after the match and had a great time. You see, in the UK we don’t take ourselves too seriously and we certainly don’t go crying because we lost a game of football and someone waved his fist at us.

For the rest of the week I was still receiving threats and insults through social media but did my best to enjoy the rest of the trip, enjoy Spain and remember that all Spaniards aren’t like those keyboard hooligans.

I had a long journey back to Thailand at the end of the week and had completed 2/3 flights when I got an email on my phone. 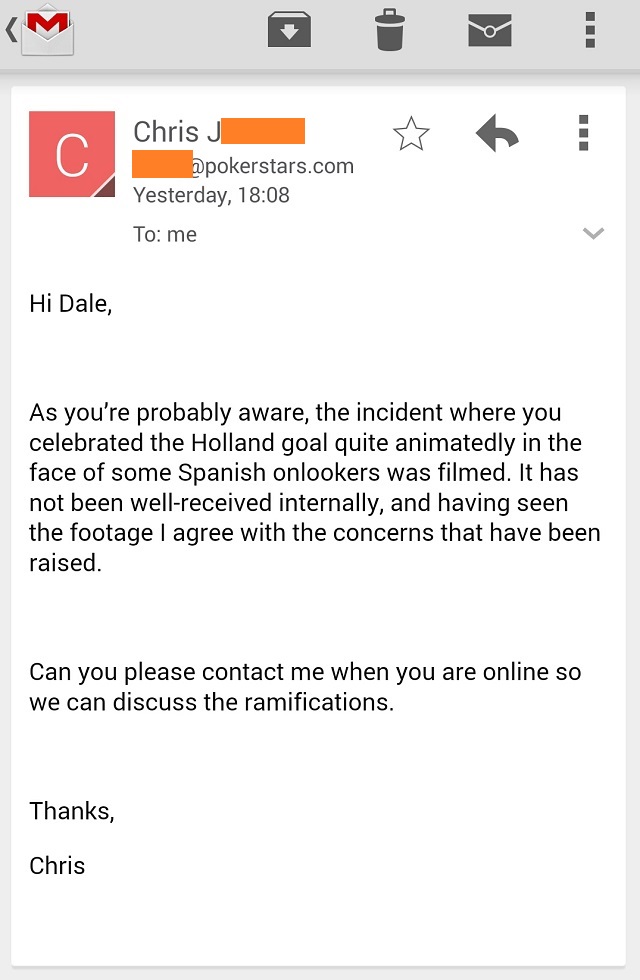 With half an hour before an 11-hour flight from London to Bangkok I didn’t want to spend the whole flight worrying and wondering so got on Skype as quickly as I could.

They didn’t even want to discuss the incident with me. They’d already discussed it between themselves and decided what to do about it.

So it was not the most enjoyable 11 hour flight I’ve ever had. I still had 6 and a half months left on my contract and had planned my life according to that.

I feel that this is a massive overreaction by PokerStars. I accept that I deserve a yellow card but a straight red? For getting it round some Spanish fans during a goal celebrations? Seriously?

Some local fans get butt-hurt for a few seconds and I have to put up with a week of cyber-bullying and then top it off with having my livelihood taken away from me with no notice. It’s just not just, especially not after spending the last 4 years of my life promoting the PokerStars brand. How can 10 seconds of madness cancel out 4 years of loyal and dedicated service?

It wasn’t even poker related. I’ve never berated a player and have chatted it up and been friendly to hundreds of PokerStars players when playing their tournaments. But go a bit too crazy during the world cup and I’m told to GTFO.. 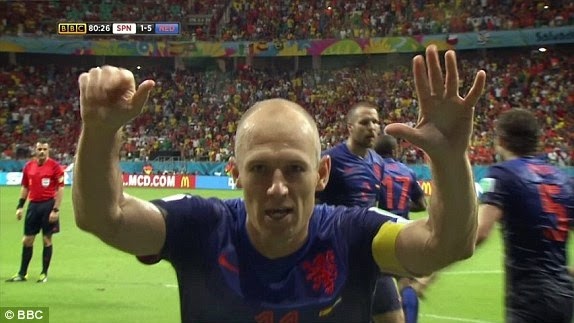