While staying in Bratislava we went out of town on day-trips twice. One day taking a hydrofoil boat down the Danube river to Vienna in Austria and on another day taking a fast train to Brno in Czech Republic. 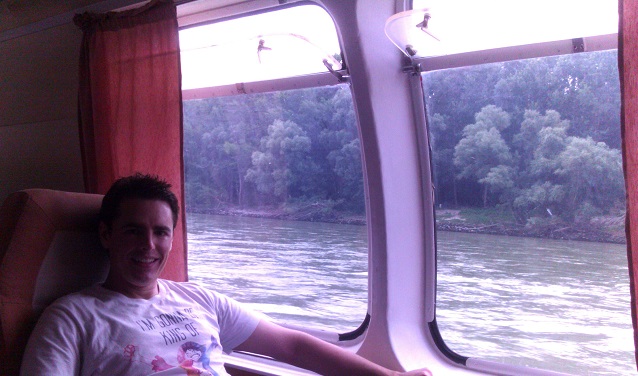 In each of those cities we turned up without any plan. Big mistake. Since my travel buddy, Amatay Jones, is good for nothing other than sitting on his lazy arse playing online poker tournaments I had to do 100% of the planning for all our travels. I didn’t plan anything for these day-trips, therefore we had no plan.

Upon arriving in Vienna we minced around the city for half an hour before we noticed one of those open top double decker buses. It’s usually a decent way to check out a city when you have limited time and are with a lazy arsed friend who won’t stop moaning if he has to walk longer than 1 km. So we sat our arses on the bus and that moany English fish finally had a smile on his face. 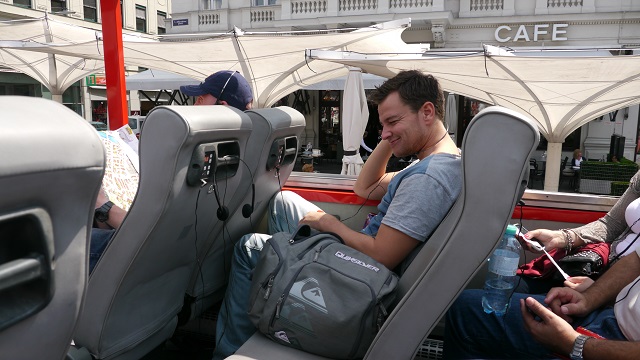 Like a couple of selfish gits we both took window seats, meaning that the last couple to board the bus had to both take aisle seats. Not that it mattered as the tour, by Red Bus City Tours, was a proper snoozefest. We were driven around to look at old buildings while listening to commentary on the headphones by some English guy with an awful monotone voice. It was like listening to a kid in school who had been instructed to stand up and read from a textbook to the class. ZzZzZzZzZz.

We only stopped at one place, for 20 minutes. Some building with a cool design, but you can’t go inside. One building that you can go inside, however, is a souvenir shop owned by Red Bus City Tours which we parked right outside. What a scam.

After that nonsense, we went for a meal and I checked my Twitter account on my phone. Earlier I had tweeted that I was in Vienna, so I now had loads of replies from followers recommending cool places to visit. One suggestion, from @flooorider, was Prater, a massive amusement park in the middle of an even bigger public park. Sounded like a plan.

So that’s how we spent the rest of our day in Vienna. Being big kids and going on awesome rides (me) and sleeping on the grass in the park (Amatay).

At Prater you can enter the park for free and just pay to get on whichever rides you want. The best one by far was Black Mamba which was a 360 degree swing that had me screaming like a girl. The amusement park alone made the trip to Vienna worthwhile for me.

On our second day-trip, to Brno in the Czech Republic, again we arrived with no plan. Not only that but we didn’t get on the train until after midday so it was 2pm already by the time we got there. The first thing we did was find the tourist information centre using Google Maps on my phone. Apparently there’s some really cool caves about 30 minutes away but we were just too late to be able to visit them that day. They recommended some stuff for us to do though, climb up some really steep tower, and visit an underground labyrinth. Fair enough.

At the old tower it was half price entry for students so I tried to blag that we were students but didn’t have any student ID on us because we’re tourists. The two girls that worked there had a three minute conversation in Czech in which they were looking at us and laughing, and eventually told us that we’d have to pay full price. Amatay was pretty pissed off at me for “embarrassing him”, but asking for a discount is a freeroll in my opinion because if they say yes I get a discount, and if they say no and laugh at us I see no negative value from that because I couldn’t care less what some stupid girl working in a tower thinks about me.

So we paid the ‚¬1 entrance fee (lol) and climbed the steep stairs all the way to the top of this old tower. At the top, breathless and pissing with sweat, we opened the door expecting to see marvellous views of the city. But it was crap. All the buildings are so close together due to narrow streets so it was just a bunch of ugly rooftops we were looking down at. Rubbish.

Next we went to visit the ‘Labyrinth under Vegetable Market’. We found the vegetable market easily enough but couldn’t figure out where the entrance to underground labyrinth was. We spent about 20 minutes walking back and forward in the baking sun, getting terrible directions from people, until we found it right where we had started.

Again it was a place that was half price entrance for students. I flirted a little with the cute girl on reception and explained that my pal and I were students but didn’t bring our ID on vacation with us. The little cutey smiled and agreed to give us the discount, saving us about ‚¬3 each. Score! You’re not allowed to visit the labyrinths without a guide so we had to join a group in which the guide only spoke Czech. However they gave us some audio devices with English commentary to listen to at each stop.

The labyrinth was interesting enough. The tunnels and underground rooms were used centuries ago for storing food, brewing beer, maturing wine and keeping mentally insane people locked up. 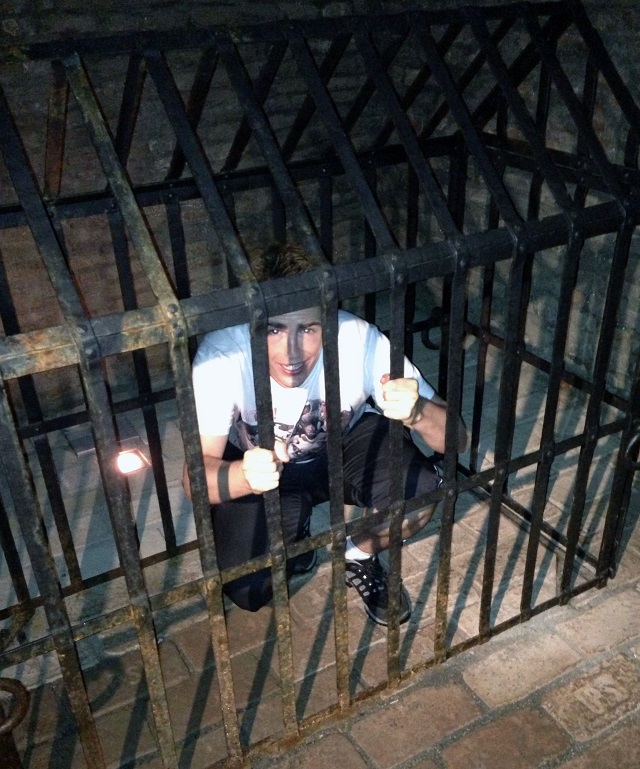 After walking all over the tiny little town we got bored and decided to call it a day early, and head back to Bratislava at 6pm. I much prefer visiting random towns and cities in Asia than I do in Europe. When we were travelling in Asia we’d always find interesting stuff just by wandering around. In Europe, everything is just a bit too familiar. Maybe I’d go back to Brno some day to visit the caves nearby the city but Brno itself seems really small and uninteresting.

I know that these Eastern Europeans don’t care much for health and safety but we saw something absolutely ridiculous while waiting for our train back to Bratislava. Only minutes before our train was due to arrive a man decided it would be a good idea to play on the rail tracks with his 3 little children. What a donk. 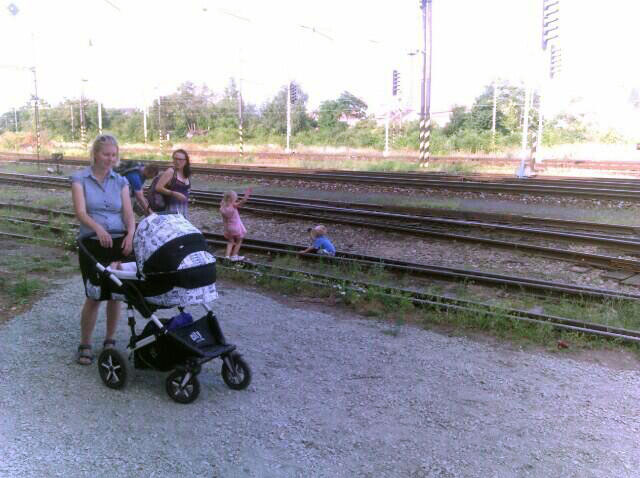