Before travelling to Bulgaria for the Eureka Poker Tour we stopped off in Budapest for a few days. It was just a few hours train ride from Bratislava and we decided to be “ballas” and travel in the first class cabin…. at a cost of ‚¬20. Europe is great for moving between cities and countries quickly and cheaply. There’s no passport and immigration control between the 26 countries in the “Schengen Area” so there’s no hassle. 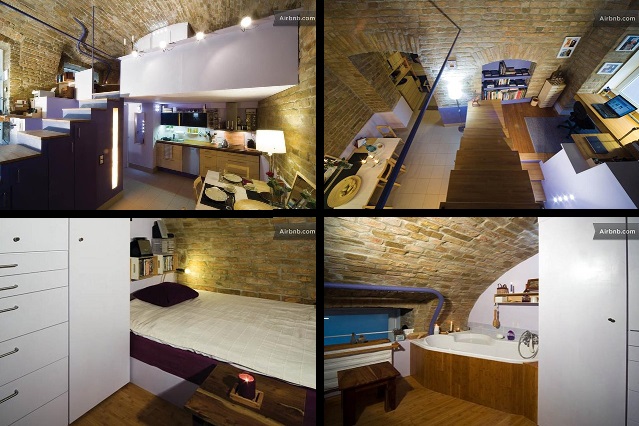 Again, I found an apartment on Airbnb. This time we rented a newly renovated and cleverly designed place in an old building with 80cm wide brick walls in the city centre. Again, this was so much better than us sharing a hotel room as we had separate rooms and fibre optic internet all to ourselves. My room had a large bathtub in it for relaxing.

Budapest is known as the “City of Spas” and has way over 100 thermal springs. It sounded like the perfect way to spend a lazy few day, so after checking into our apartment the first thing we did was research for a thermal bath place to visit. I read about an old Turkish bath called Rudas that has existed since 1550 and is popular with locals / not so touristy. So we agreed to go there.

About 5 minutes before we were due to go I was doing more research on Rudas. I discovered that on weekdays it’s “gentlemen only”, and most men go fully nude. We were a bit taken aback by that, but what the hell, if that’s what the locals do, “when in Rome….”. But as I read further the article said “On male-only days Rudas is a popular gay cruising location”. As I read it aloud, Amatay shouted “FUCK. THAT.”

Two good looking guys like us would have gotten way too much unwanted attention in there so we decided to make other plans. Instead we went to visit Margaret Island, a 2.5 x 0.5 km island in the middle of the Danube river that is covered with parks and recreational stuff.

We hadn’t worked out the bus / tram system yet so took a taxi. I hate taxis in foreign countries. They always try to scam me so I just avoid using them whenever possible. But with limited time we didn’t have much choice. After we got in the taxi I sat with Google Maps on my phone tracking where we were going. The bastard driver took us on a route double the distance than he should have, to the opposite end of the island. I nearly took his door of the hinges when I slammed it shut after getting out.

At Margaret Island we went straight to the massive outdoor swimming pool / hot springs complex in the middle of the island. The weather was glorious and the complex was really nice, loads of pools with different temperatures, places to sunbathe, eat and drink.

After about a minute in the main (cold) swimming pool we decided “screw that” and went straight to the hottest of the thermal spring pools. It was so relaxing, we floated around there until our fingers were wrinkly. After getting out and on our way to leave when we noticed a whole section that we hadn’t been to yet, with massive wave pools and flume rides. So we ended up staying another hour doing that. Joy. 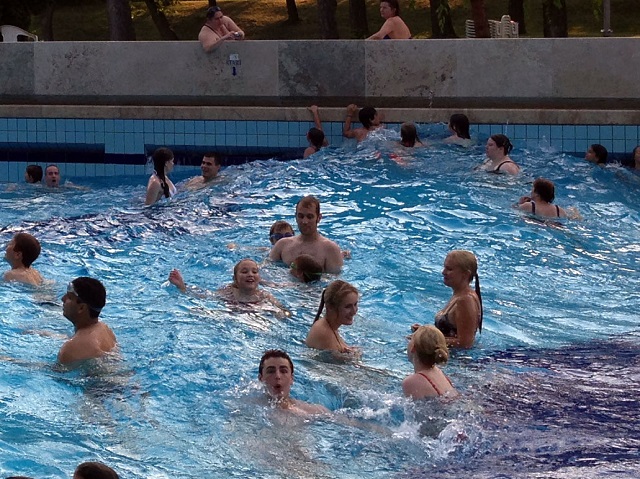 The next couple of days were spent exploring the massive city. We got tickets for one of those stupid tourist buses again, but this one was much better because it was “hop-on, hop-off” with two bus routes and a boat, so it was perfect for seeing loads of places in a short amount of time.

The best places we visited using the bus were the Buda Castle area on the hill and the massive city park near Heroes Square where there’s a zoo, fairground and a circus, which of course we got there too late to see.

We did actually end up going to the Rudas baths that I mentioned previously. We went at midnight on a Saturday night. At weekends it’s co-ed, mandatory bathing suits and there’s night time bathing til 4am.

There’s one main bath and 4 smaller baths of varying temperature from 16-42C, a sauna, a steam room, an ice pool, a large swimming pool and massage areas. We spent a good couple of hours in there relaxing, it was lovely, although at times a little uncomfortable when there were guys next to us kissing and cuddling their girlfriends in the water.

It was a nice few days in Budapest. Still, there’s tons of stuff we could have done but didn’t get a chance to due to waking up in the afternoon. But that’s fine, it’s nice to have reasons to go back there in the near future.