Next weekend I’m off on a little Euro trip to check out some cool places that I’ve never been before, have fun and play some poker. 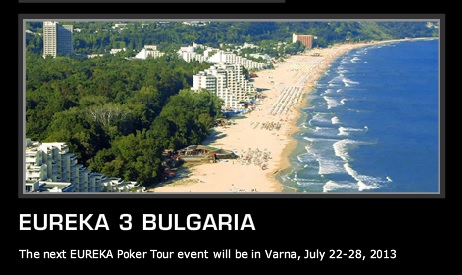 My first stop will be Bratislava in Slovakia where I’ll spend a week.

I’ve booked an apartment on the outside of the city in a green belt zone next to the Danube river and Botanical Gardens. It looks like a nice place to stay and only 10 minutes on the tram to the city centre.

Bratislava is close to the Austrian and Czech borders so I may take day trips to Vienna and Brno while I’m there.

I’ve heard that there’s quite an active poker scene in Bratislava so I will try to get in a nightly tournament or something and check it out.

My next stop is Budapest in Hungary where I have a pretty sick apartment for 3 days in Buda. Budapest is known as the ‘city of spas’, so I’ll probably spend most of my time soaking in thermal springs and getting massages. I haven’t really thought about what else I’ll do other than that.

I will then be heading to the Golden Sands resort near Varna on the Black Sea coast of Bulgaria. I’ll be spending a whole week winning tournament at the Eureka Poker Tour (or relaxing on the beach if I donk out in the early levels).

Hopefully I run better than I did in the last Eureka event in Croatia last month (trip report here) where I busted the main on the last level of a long day 1 and bubbled both of the side events I played.

After Varna I will spend a few days in the Bulgarian capital, Sofia. It looks like a great place to go hiking from so that’s my plan assuming dry weather. At night I will check out some of the casinos to play some poker assuming that my week at Eureka doesn’t leave me tilted.

I’ll then be back in Scotland for just a week before heading off to Ireland for UKIPT Galway. Tough life.

Other than this blog I’m also writing on PokerStarsBlog.com. My first blog posts there are advice for poker pros who want to travel and take their work with them. I go into details about choosing suitable accommodation, laptop and backup internet amongst other things.

Here’s an updated spreadsheet of my FPP spending so far this year. 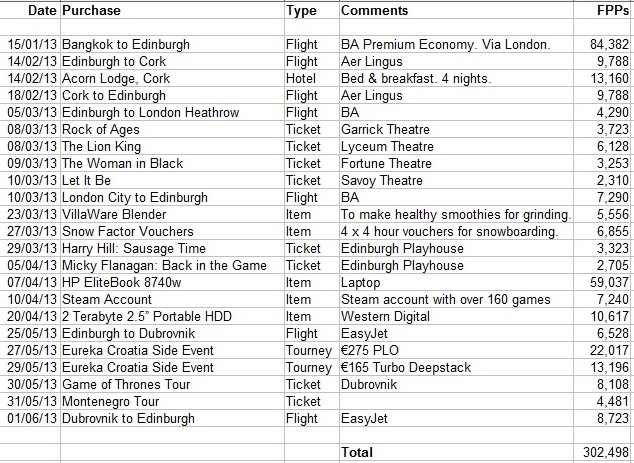 I’ve gotten a lot for 300k as you can see. Of course I will be using FPPs to pay for everything on my upcoming trip too,

If you were following my blog late last year you’ll know that I really got into healthy eating and fitness. I managed to lose most of my excess weight, going from 95Kg to 75Kg over the year.

Well moving back to Scotland was somewhat of a culture shock after 2 years in Asia. With the lack of daylight and brutal weather at the start of the year I barely went outside and started eating junk food again.

I weighed myself a couple of months ago and I was back up to 88Kg. It was a bit of a shock, but since then I’ve started running again. It’s now summer in Scotland so the days are long and sometimes it’s warm, or at least mild.

This is where I’ve been running at 4am as soon as it becomes daylight. Arthur’s Seat in Edinburgh. Usually I’m the only person there so it’s like my own private playground to run around in.

I blew more than 3 years of dust off my PlayStation 3 recently because ‘Last Of Us‘ was released. It’s an epic zombie apocalypse game, made by the same developers as ‘Uncharted’. It had an incredible amount of hype and I’m happy to say that it lived up to it. Easily one of the best single player games ever created.

I bought someone’s Steam account from them a couple of months ago for £75. He had over 160 games, so that’s value right there! The main games I’ve been playing on my laptop are Sleeping Dogs, an open world GTA type game set in Hong Kong and Back To The Future, a point-and-click adventure game based on the movie by the same developers as Walking Dead.

On Xbox 360 I recently played through Far Cry 3, which was thoroughly enjoyable, and have been dipping into Borderlands 2 and BioShock Infinite now and again.

I’m not as in touch with the video game scene as I used to be. For the 2 years that I was in Asia I only had a Nintendo 3DS, while my consoles were back in Scotland. So leave a comment here or on twitter @Daleroxxu if you’ve got any recent game recommendations for me.