GCOOP day 2 wasted no time in picking up exactly where day 1 left off. Within 15 minutes the Hi had hit guarantee, and by the time late registration closed on both events the guarantees had been doubled! The 6-Max variant makes for a fast and ferocious game and that’s exactly what we saw last night as the action unfolded.

A total of 257 unique players fought it out 6-Max style in the Hi event and with 93 re-buys the prizepool ended up a whopping £9,800! A familiar alias made the final table, ‘coldfour’, who finished 5th in GCOOP #1-Lo. With two final tables and good finishes under their belt, ‘coldfour’ is in good shape on the GUKPT Passport Leaderboard. 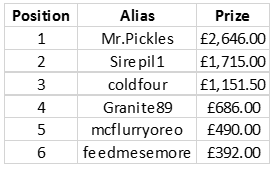 The first casualty of the official final table was ‘feedmesemore’ who 4-bet shoved 15 big blinds holding J♠J⋄ into the A♣Q⋄ of ‘Mr.Pickles’. The classic race was all but over on the Q⋄4♥7♠ flop. The turn 7♠ left ‘feedmesemore’ needing to hit one of the two remaining Jacks in the deck. The river A♥ sealed their fate and ‘feedmesemore’ exited in 6th place.

The next elimination occurred in a blind vs blind hand as ‘mcflurryoreo’ shoved their short stack into chip-leader ‘Sirepil1’. A snap call from the big blind and the cards were on their backs – Q♣3♣ for ‘mcflurryoreo’, A♠9♥ for ‘Sirepil1’. The board ran out 6♠K♣7♥10♠7♣ leaving ‘Sirepil1’s ace high as the best hand. A huge congratulations to ‘mcflurryoreo’ who not only went out in 5th in the Hi but also came 7th in the Lo event. Two extremely impressive simultaneous deep runs; 6-Max is clearly your game!

You need a bit of luck to win tournaments, and luck was very much on ‘Mr.Pickles’ side last night as he found himself eliminating ‘Granite89′ in two quick hands. Firstly,’Mr.Pickles’ min raised from the small blind and ‘Granite89’ made the call from the big blind. Heads up to a flop of 9⋄6♥8⋄. ‘Mr.Pickles’ check called ‘Granite89’s shove and the cards were tabled. ‘Granite89’ showed 6⋄7♥ for bottom pair and an open ended straight draw, however ‘Mr.Pickles’ was holding 7♣10⋄ for the flopped straight! The turn and river J♠A⋄ changed nothing and ‘Mr.Pickles’ doubled up, putting a big dent in ‘Granite89’s stack. The very next hand saw the same two players get it all in pre-flop against each other, this time with ‘Granite89’ at risk. ‘Mr.Pickles’ J♥J♣ was up against the K♣Q⋄ of ‘Granite89’. Joy for ‘Granite89’ as the flop came down Q♥A♥A♠, giving him a higher pair. Turn 6♥….uh oh. River 4♥ putting 4 hearts on the board and giving ‘Mr.Pickles’ a flush. 2 brutal hands and ‘Granite89’ was out in 4th.

With 3 players left, the game really heated up. Almost 30 minutes went by without a bust-out as each player gave it their all. ‘coldfour’ gained and lost the chip lead numerous times until eventually getting K♥J♣ in against the K⋄Q⋄ of ‘Mr.Pickles’. The Q♣ on the flop was enough and ‘coldfour’ was out in 3rd. A £1,151.50 payday and 100 leaderboard points will no doubt be some consolation.

Congratulations to the below players who all scoop a £110 GCOOP Main Event ticket for taking our sponsored pros out of the Hi event:

Congrats Johnoo who won my bounty in the #GCOOP17 £30 six-max.
He took most of my chips in a huge set-vs-backdoor-flush cooler. 🙈
The reward: 🏆a £110 GCOOP Main Event ticket! 🏆

Bust both 6 max comps. “Carls712” got my bounty after finding QQ after I moved all in with AQ.
Good luck in this event, rest of the week & of course main event Sunday, you’re now freerolling!😁#TeamSwift will return tomorrow & hope for better result! #GCOOP @GrosvenorPoker

You can win your £110 GCOOP Main Event ticket, and a shot at the £50,000 prizepool, by knocking out  one of our sponsored pros in tonight’s GCOOP events. 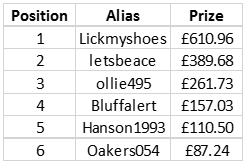 A few hands into the final table saw ‘Oakers054’ shove all-in for 8 big blinds holding J♥Q♣ only to run into the A♥A♣ of ‘Lickmyshoes’ in the small blind. The Q♥3⋄6♣ gave ‘Oakers054’ some hope but the turn and river 3♠3♥ gave ‘Lickmyshoes’ a bigger full house. Back to back final tables for ‘Oakers054’ with their 6th place finish – very well played.

‘Bluffalert’ lived up to their alias with a creative play when they were down to 5 players. ‘Bluffalert’ 3x opened from under the gun and got a call from ‘letsbeace’ in the big blind. Both players checked the 8⋄J♥10♠ flop. On the turn 5♥ ‘letsbeace’ check-called a 1/3 pot bet from ‘Bluffalert’ and they both saw the 7⋄ river. ‘letsbeace’ checked and ‘Bluffalert’ moved all-in, overbetting the pot and putting ‘letbeace’ to the test for his tournament life. ‘letsbeace’ went deep into the tank, using a lot of their time bank before eventually finding the fold. ‘Bluffalert’ couldn’t help but needle, showing the 3⋄6⋄ for sweet nothing and a well-timed bluff.

‘Hanson1993’ fell victim the most classic race in poker when they 3-bet shoved Q♣Q⋄ into the A♥K♠ of ‘Lickmyshoes’. The K♥ on the flop was enough for ‘Lickmyshoes’ to scoop the pot and ‘Hanson1993’ went out in 5th.

‘Lickmyshoes’ secured another knockout when ‘Bluffalert’ shoved 14 big blinds from under the gun with 5♣2♣ only to get snap-called by ‘Lickmyshoes’s A♠J⋄. The board ran out J♥3⋄3♠9♣J♣ and we bid farewell to the showman ‘Bluffalert’ in 4th.

The hot streak continued for ‘Lickmyshoes’ as he bagged yet another elimination. Having such a big stack meant ‘Lickmyshoes’ was able to call-off ‘ollie495’s 10 big blind 3-bet shove holding 7♥6♥. ‘ollie495’ tabled K♣J⋄ for the better starting hand but the 7⋄ on the flop flipped the tables. ‘ollie495’ couldn’t improve and exited the tournament in 3rd place, good for 100 leaderboard points and £261.73.

‘Lickmyshoes’ began heads-up play with a dominating 4:1 chip lead but ‘letsbeace’ put up a big fight. It all came to a head when ‘letsbeace’ 3-bet shoved holding A♥10♠ and got called by ‘Lickmyshoes’ with 9♠9⋄. The board ran out J⋄J♠8♣8⋄5♥ and we crowned another GCOOP victor. Well played to ‘letbeace’ for an impressive performance and a well-deserved 2nd place finish.

Congratulations to ‘Lickmyshoes’ for a dominating and devastating display of 6-Max poker prowess. Your £5 buy-in has been converted into £610.96 and 150 leaderboard points!

Back to back final tables for ‘coldfour’ is good enough for 1st place as it stands. Having finished 20th in GCOOP #2-Hi last night, ‘JB_Simon’ added to their points total and sits in 2nd place with just a 5 point difference.

It’s still early days for the leaderboard, and with 4 qualifying GCOOP events tonight I think we could be looking at a very different leaderboard tomorrow.

Happy days for Mr Speech Play as he takes an early lead on the sponsored pro leaderboard. Will Kassouf came 33rd in GCOOP #3-Hi earning himself 5 more points than his fellow pros.

So after Day 2 of GCOOP I’m top of the Grosvenor Pro Leaderboard! Long way to go still but a great start for #TeamKassouf

Wed night: APAT and Heads Up events. No late reg in the heads up events so be sure to register before 8pm. GL and see you at the tables on @GrosvenorPoker

Although it wasn’t enough to score extra leaderboard points, Jeff Kimber made a deep run in the Hi, finishing  55th, all the more impressive considering he was attending a book launch simultaneously.

Grinding #GCOOP on the iPad while playing the bounty invitational comp at the launch for Anthony Holden’s new book @HippodromeLDN pic.twitter.com/IYe3JW47co