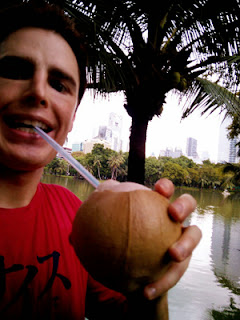 As August came to an end it started to get very cold and miserable again in Scotland. That’ll be the winter setting in, obv. So I did the sensible thing by stuffing a suitcase full of clothes and Irn Bru and flying back to Thailand at the start of September.

I found myself a sick condo in Bangkok to rent short term with nice facilities such as gym and swimming pool. For the past 6 weeks I’ve been happily living there, wearing shorts and t-shirt every day and consuming a copious amount of coconut water.

Thankfully I have a very stable internet connection and have had only one power cut so far so it’s been easy to continue the online poker grind. That’s if you can call it a grind. I’m just opening up my laptop and blasting out a few hundred hands of Zoom PLO at several times throughout the day when I’m not out doing stuff.

The only negative thing about the trip is that I missed out on playing UKIPT London recently but that’s OK because I’m going to make up for it by winning the next one, in Isle of Man.

To break up the long Journey from Scotland to Thailand I had a 5 day stopover in Dubai. It’s exactly half way between the two countries, there’s loads of fun stuff to do there, and when flying Emirates it doesn’t cost any more to do a stopover there rather than just connecting flights.

I got a great deal on the 4 star Ramada Deira hotel that’s right next to a metro station (less walking around in absurd > 40 C heat) for £45 per night. When I arrived at 1am they told me that all their standard rooms were full so they were upgrading me to a suite free of charge. Score!

The weather was far too scorching hot to go to the beach or really do anything outdoors, especially for a Scottish lad, so the first fun activity I did was visit Ski Dubai. It’s a massive indoor ski resort with a 22,500 square meter area of snow and the whole resort kept at between -1 and -6 degrees C. I’d sure like to see their monthly electricity bill for that! 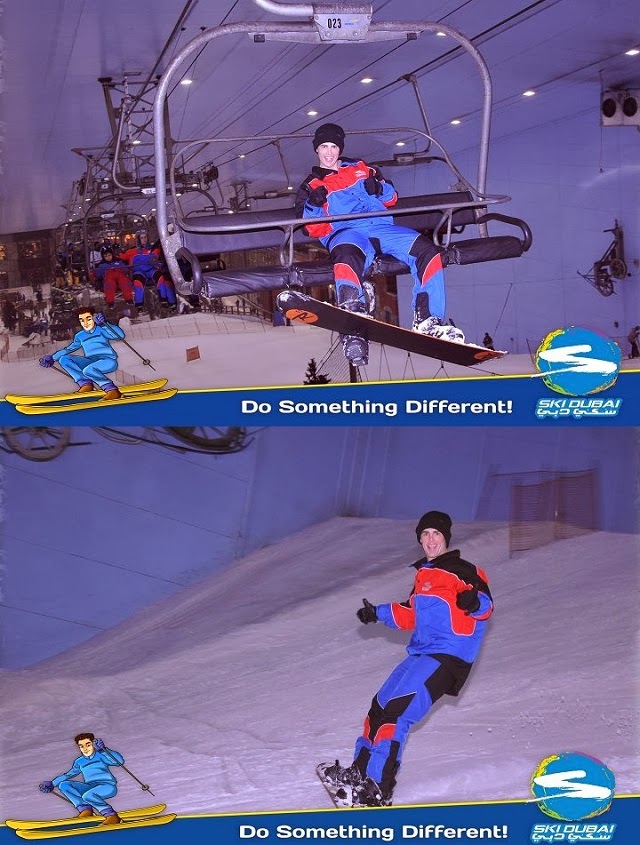 I had heard that it would be busy but when I was there (a Friday evening) it was extremely quiet. There weren’t any queues for chairlifts and there was loads of space on the slopes so I had a great time.

The tallest building in the world, the Burj Kalifa, is in Dubai. The first time I seen it I was absolutely astonished. There are some massive skyscrapers all over Dubai but this thing just completely dwarfs all of them. 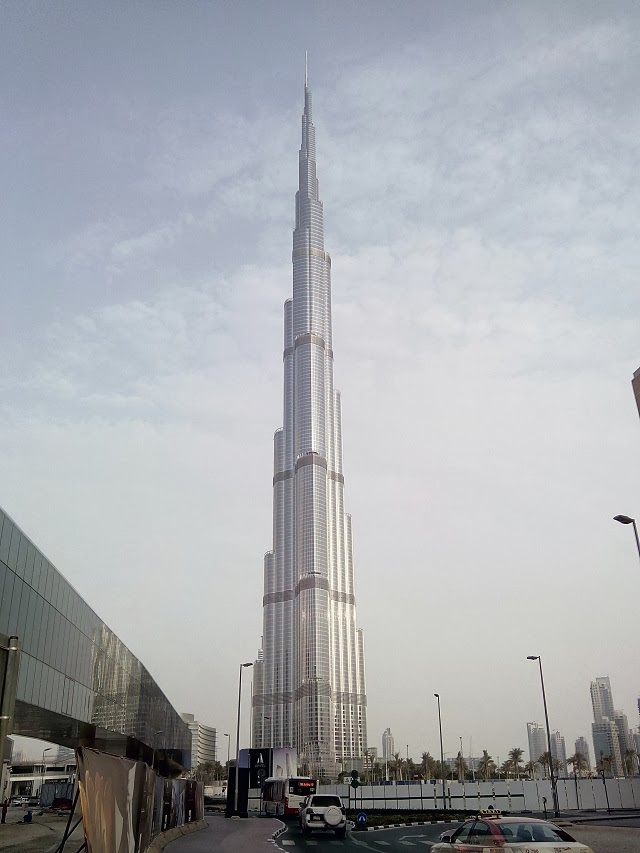 There’s a large observation area ‘At The Top”, which isn’t actually at the top, but is most of the way there. I went up there at 5pm on a clear day, the perfect time to experience the view before, during and after sunset. Thankfully the elevator was working as taking the stairs didn’t look like much fun. 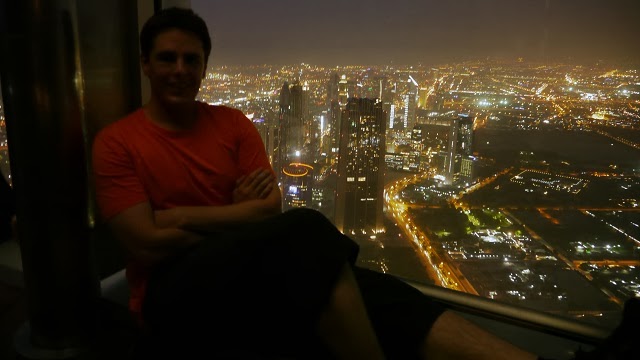 I did a fair amount of shopping while I was in Dubai. There’s no sales tax, unlike in the UK where you have to pay 20% more than everything is worth only for the government to piss it up the wall. The largest mall in the world, the Dubai Mall, is there, with over 1200 different shops, a Sega World, Olympic size ice rink, aquarium, Bellagio-like fountains, and 22 screen cinema. A decent place to spend a day or two!

I needed a new pair of Bermuda shorts so I was in a sports shop looking for some when one of those annoying bastard shop assistants kept following me everywhere I went like a bloody stalker. Who is training these clowns to do this? If I need help with something I will ask, I’m a big boy. Otherwise leave me the feck alone son.

I found the Bermuda shorts area and stopped to have a look. The wee man stopped beside me asked me what I was looking for and I told him, “Bermuda shorts”. He was trying to be helpful by pointing at different shorts and stuff but I told him that I didn’t need any help thanks. I’m pretty sure that I know what I want better than he knows what I want, ffs.

Wee man then stood aside instead of walking away. I could see him out of the corner of my eye watching me the whole time I was looking at the shorts. Really annoying! I was in half a mind to walk out the shop and half a mind to turn around and throttle him. However I happened find a pair of shorts that looked awesome. The XL size looked like they would fit me so I asked where the fitting room was. The bloke insisted that I try on the size L, “fit you more better”. I was extremely sceptical, but tried them anyway. I got them up about as far as a few inches above my knees. Ridiculous. 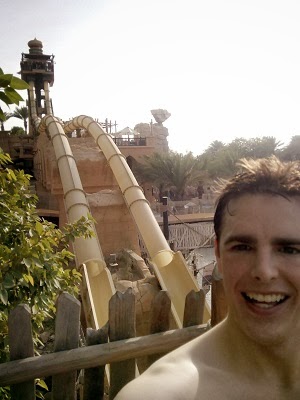 I got out of the fitting room and literally threw the shorts at the guy, “give me the XL back please”. I tried on the XL and astonishingly couldn’t get them up over my massive thighs. For the first time in my life I had to buy an XXL size. Embarrassing! I think the sizes are just smaller made in that part of the world….. well that’s my excuse anyway and I’m sticking with it.

On my last day I finally was brave enough to go outdoors, because I heard that the Wild Wadi water park wasn’t to be missed and I had a sexy new pair of XXL Bermuda shorts to show off.

So I slapped on the SPF 50+ and spent a day there going on awesome water rides. Again, no queues. When I read about this place on trip advisor people were complaining about spending loads of money to go there only to spend the whole day waiting in queues but it was really quiet when I was there.

So if you go to Dubai in early September the weather will be unbearable but the upside to that is less tourists, less queues!

I’d definitely return to Dubai the next time I’m flying between Scotland and Asia. There looks like there’s loads more fun stuff to do there and two 6-7 hour flights 5-days apart is much better than a 1 hour flight to London followed by a wait then 12-13 hour flight to Asia.

On Tuesday I will be leaving Thailand and taking a 22-hour, 3-flight journey from Bangkok to Isle of Man, where PokerStars has their headquarters. Unfortunately I don’t have time for another Dubai stopover on this trip so I will just have to deal with an absolutely brutally long journey.

VIP Club Live will take place in Isle of Man on Wednesday. I’ve never been to one of these before but I hear it’s like a big party exclusively for PokerStars VIPs, no guests allowed. If you’re wondering how to attend, you can buy in with FPPs through the VIP store, with ticket prices being cheaper the higher your status is, and absolutely free for Supernova+.

There will be non-stop food and an open bar, which is reason enough to go in itself if you ask me, but it’s also a good opportunity to hang out with other poker players, PokerStars pros and PokerStars staff. Sounds like a lot of fun so hopefully I’m not too jet-lagged and tired to enjoy it.

The day after the VIP Club event will mark the start of the first ever UKIPT event to be held in the Isle of Man. There’s around 15 PokerStars pros confirmed to attend the event, including big names such as Negreanu, Mercier and Daleroxxu 😉 PokerStars are also allowing their staff to play in the £500,000 GTD main event, so it’s going to be like one big home game that they’re hosting.

Up until now I’ve always kept 100% of my action in UKIPT events but as part of Team Online Weeknbsp;I’m giving 10% away.

The person who will get 10% of whatever I cash for at the UKIPT Isle of Man main event will be whoever wins the TwoPlusTwo PokerCast invitational tournament, which is tonight, so be quick! It’s only $1 to enter, has an extra $500 added to the prize pool, and usually has around 150 runners, so great value. You need to listen to the latest show to get the password to play. Good luck.

There’s a lot going on during Team Online Week including the signing of two new members, Alex ‘Kanu7’ Millar from the UK and Marc-Andre ‘FrenchDawg’ Ladouceur from the French part of Canada. But that’s not all. Everyone who is a Supernova VIP was emailed an application form to apply to join the team, with a guarantee that at least one of the applicants will be accepted.

There will be four new Team Online short film documentaries released, which are always very popular. In addition, there’s a chance for you to win a full package to the PCA.by making a video about your own poker story. My Team Online colleagues and I will vote and chose the best one. (Hint: you’re way more likely to win my vote if you take a comically approach or if there’s really hot chicks in the video.)

I recently did an interview with PokerListings that I feel is the best interview I’ve done to date. That is thanks to Matthew Showell who is a very talented writer and journalist. He asked me questions than were interesting, relevant and non-generic and it was clear that he’d done a lot of research about me before contacting me.

You can check it out here – Dale Philip Enjoying “Five Glorious Years of Complete Freedom”.

I’ve been nominated again at the British Poker Awards. This time in the Best Blogger category, along with David Nicholson, Rupert Elder, Neil Channing and Kara Scott who all write superb blogs. It’s some tough competition and I feel like I’m one of the least well known out of that lot so I’m less than optimistic about my chances of winning.

Still, if everyone who reads this votes for me I’d have a good chance of taking it down, so do me a favour and head over to http://www.thebritishpokerawards.com/ to give me your support. 🙂