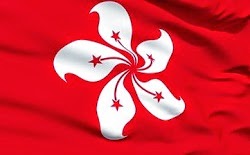 After a week of fun in Korea I flew back to Thailand, but not before stopping by Hong Kong on the way. My plan was to spend 3 days there hiking in the rural areas. Yes, apparently Hong Kong has rural areas!

I’d visited Hong Kong before and didn’t think much of the place. My experience was one of being surrounded by massive buildings and millions of people. Hong Kong is incredibly overpopulated and it seemed like no area of land was undeveloped.

It was only after reading the blogs of my fellow travellers that I learned there’s a lot more to Hong Kong than I’d previously experienced. I learned about the many isolated beaches, incredible forests and mountains with breathtaking views that Hong Kong has to offer. So I returned with the intention of exploring these areas and experiencing a totally different side to Hong Kong.

What I hadn’t planned for was terrible weather. There was a massive storm for the entire length of my visit, which unfortunately meant it wouldn’t be safe or comfortable to do the hikes that I’d planned.

I had to quickly come up with a ‘plan b’, which I did easily enough. I decided to spend a few days eating the local food – always a must when travelling, and visiting amusement parks – always fun for a big kid like me. Now a tropical storm may not seem like amusement park weather to most people, but that’s exactly the reason I wanted to visit them. Wet weather absolutely guarantees a low turnout at amusement parks, which means no queues for any of the rides.

It was my first night in Hong Kong and I’d already gotten crabs. The good kind at least.

To get the meat out of the crab’s claws you have to smash through them with a cracker tool. It was so tasty that I didn’t want to leave anything behind and was picking every last piece of juicy meat out of the claws.

I got in some mess eating that lot with my bare hands, food all over my t-shirt like a child. Fortunately I was eating at a shabby-looking street restaurant with plastic tables and chairs so I wasn’t too concerned about my shabby dining etiquette. I could see the women who work there looking at me and laughing with each other though, bastards.

Hong Kong has the smallest Disneyland in the world. With that in mind, and the fact there would be no queues because of the weather, I was confident about turning up mid-afternoon and still getting a go on every ride.

My first ride was the ride to actually get there. Disneyland has it’s own line on the Hong Kong metro. Convenient and also fun – the train windows are Mickey Mouse shaped.

The first people, or rather mice, to greet me at Disneyland were my old pals Mickey and Minnie. It’s been a couple of years since I last hung out with them, at Disney Sea in Tokyo, so it was good to catch up. Although they are always very quiet, never have much to say. 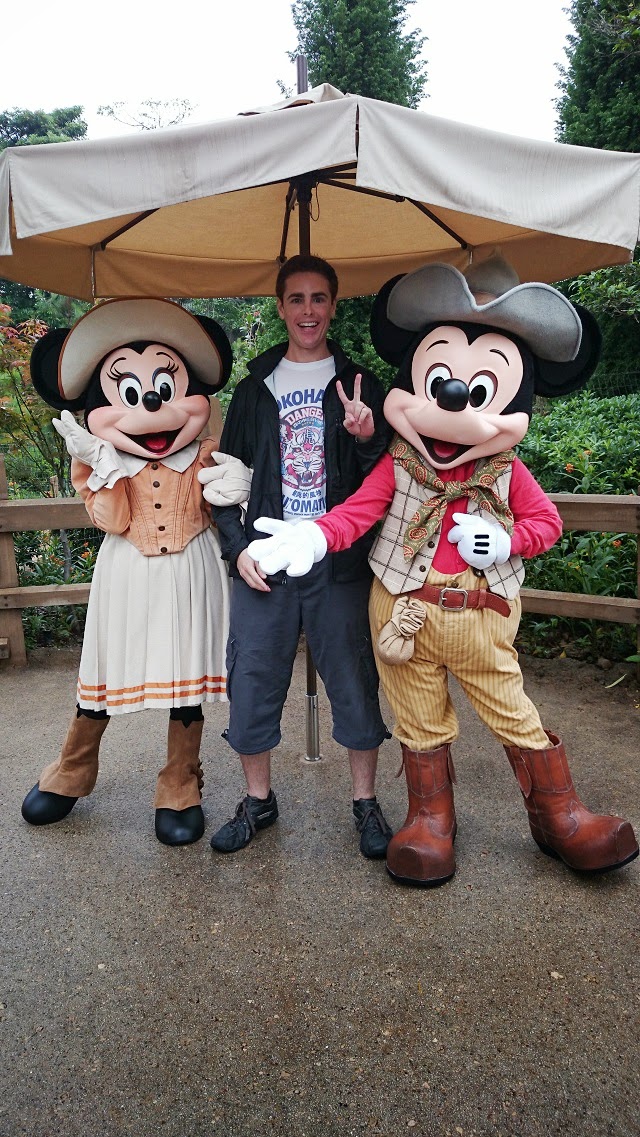 As much as I love Mickey and Minnie, the Disney princesses were a lot more fun to hang out and chat with. Don’t they look happy to have found a handsome Scottish prince? 🙂

Within a couple of hours I’d been on every ride that was worth going on, many of them multiple times. I rode Space Mountain about 5 times so knew when the camera flash was coming……..

Like every Disneyland there’s a big parade in the middle of the day. That’s where I finally saw my chipmunk namesake, Dale, who I’d been looking for all day. 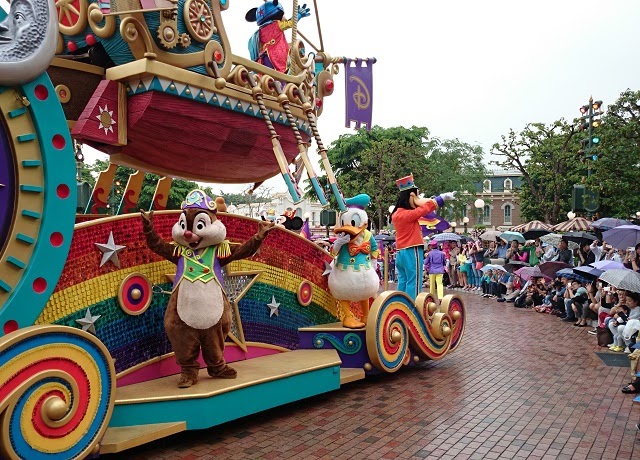 Towards the end of the day the rain started lashing down. It was right at the time the Lion King show was starting so almost everyone in the entire park rushed into the theatre to watch it.

There was lots of dancing and all the awesome songs from the movie. That music could put anyone in a good mood. Hakuna matata! 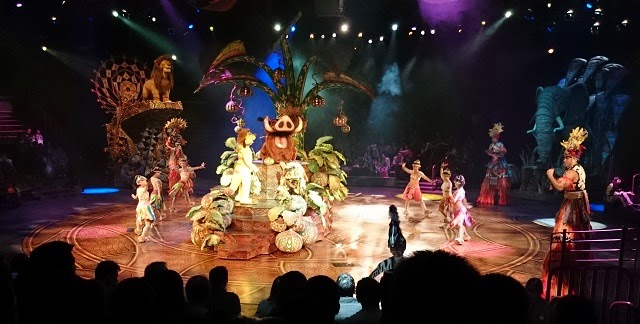 I’d experienced most of what Hong Kong Disneyland had to offer and it wasn’t even dark yet. There were fireworks scheduled before closing time but I just decided to GTFO. But not before devouring a delicious hot Mickey Mouse waffle with cream, maple syrup and strawberries. Yum!

I went out wandering the streets after getting back from Disneyland, looking for some good food. I found a little place that served pineapple special friend rice, served inside a hollow pineapple. I was impressed by this. The hollow pineapple adds a lot to the presentation and also the taste as you scrape the inside while spooning out the rice.

Not a bad meal for a few quid!

Asian portion sizes do leave me wanting more. Fortunately in Hong Kong you can find the tasty Portuguese Egg Tarts everywhere, hot and fresh. They are basically just egg custard and pastry, simple but delicious.

The other of Hong Kong’s two largest amusement parks that I visited was Ocean Park. It’s much bigger than Disneyland and it’s much more than just an amusement park, it’s also a oceanarium and zoo.

Ocean Park doesn’t have Mickey Mouse or his Disney friends but they do have something even cuter, Pandas! Five of them! 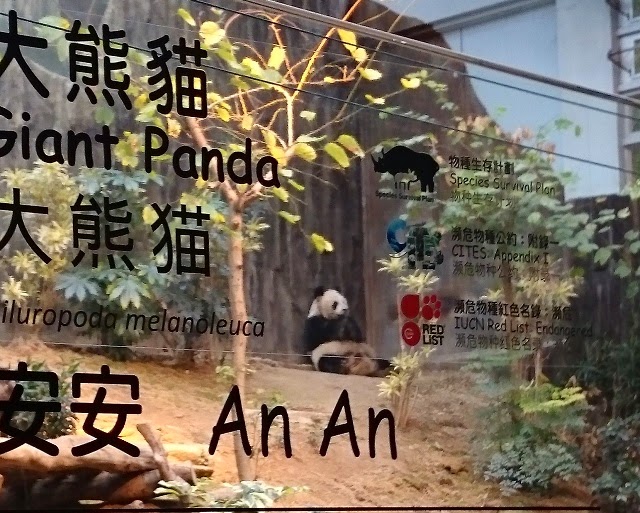 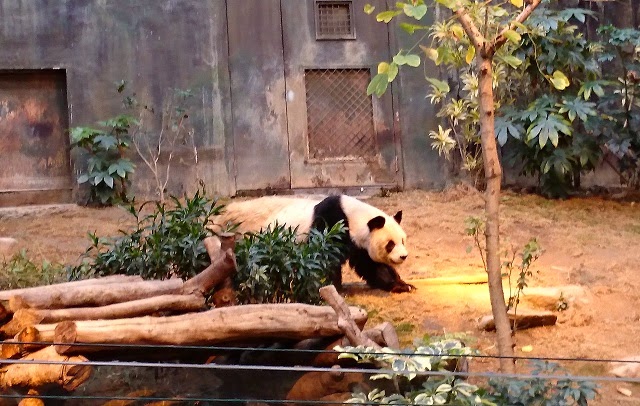 It also features some stunning views, both from the restaurant………. 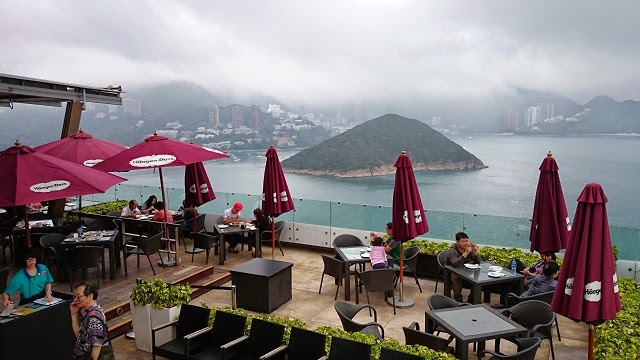 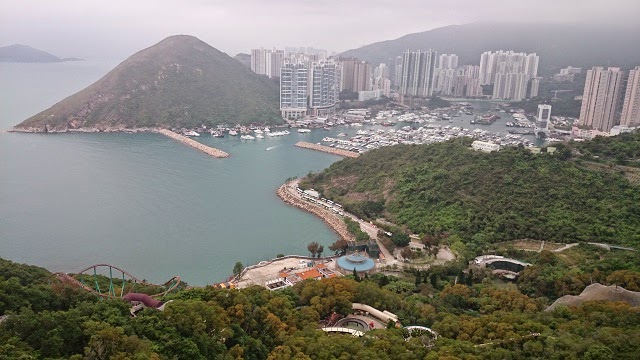 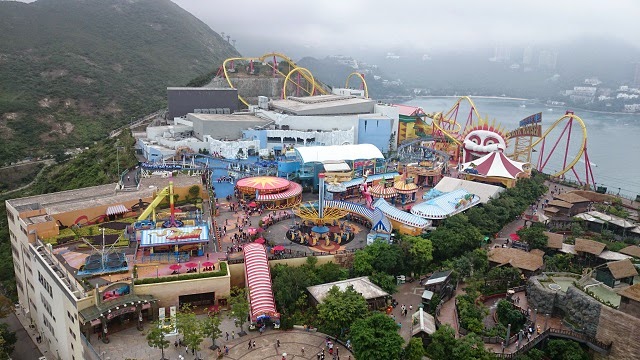 Even on a cloudy, stormy day the views were beautiful. Even more beautiful – the lack of people in the park, meaning a day of unlimited rides with zero queues.

The best ride by far is Hair Raiser – a twisting, high-speed rollercoaster built on the side of a mountain. 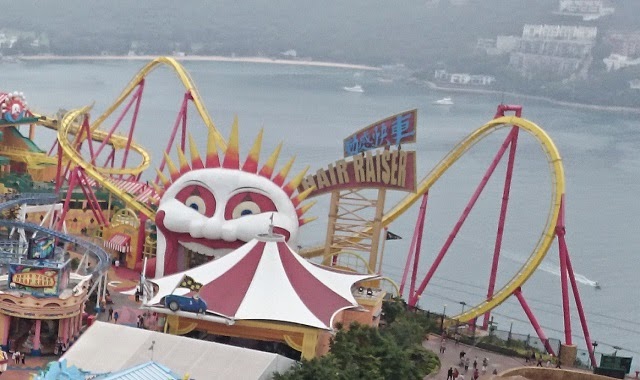 I was talking to a girl who said she queued for two hours to ride it last summer, and that was a fairly normal wait time. Well I queued for zero hours and zero minutes, each of the eight time that I rode it. Hooray for stormy days.

When it really, really started pissing it down I took shelter at a dolphin show. 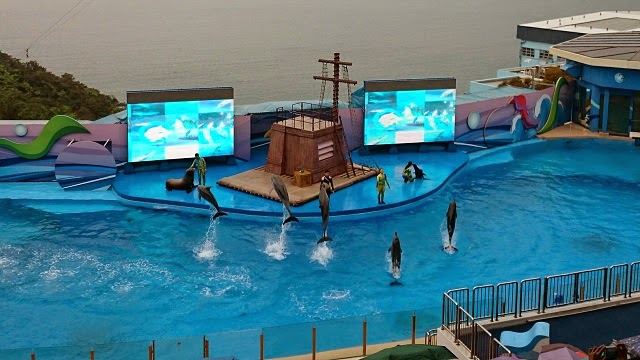 It was very impressive. Dolphins are incredibly intelligent creatures. Which makes me consider the morals of keeping them in captivity. I wish it was possible to talk to them and find out how happy they are with their lives.

Hong Kong has a branch of the famous Japanese ramen restaurant Ichiran. It was recommended to me by a bloke on twitter. You can do a lot of research online about what to see and where to eat when you travel but you can’t beat a personal recommendation from someone.

Ichiran is in the Casueway Bay area of Hong Kong, where I went to visit a famous video game arcade. It turns out the arcade was shut down last year so Ichiran saved me a wasted trip.

It’s the perfect restaurant for people eating on their own as you are given your own little booth so slurp up your noodles in private. It is actually their policy to minimise the interaction with staff and customers as much as possible. The idea is that after spending the day surrounded by people in the city that you’d rather just relax and enjoy your ramen in peace. Well, suits me. 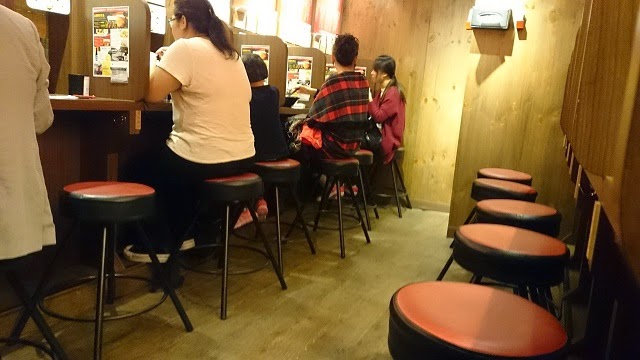 You’re given a sheet of paper with tick-boxes to order the ramen to your personal taste. After filling it out you press a button and a hand comes and takes the paper from you through the window. The owner of the hand says nothing. 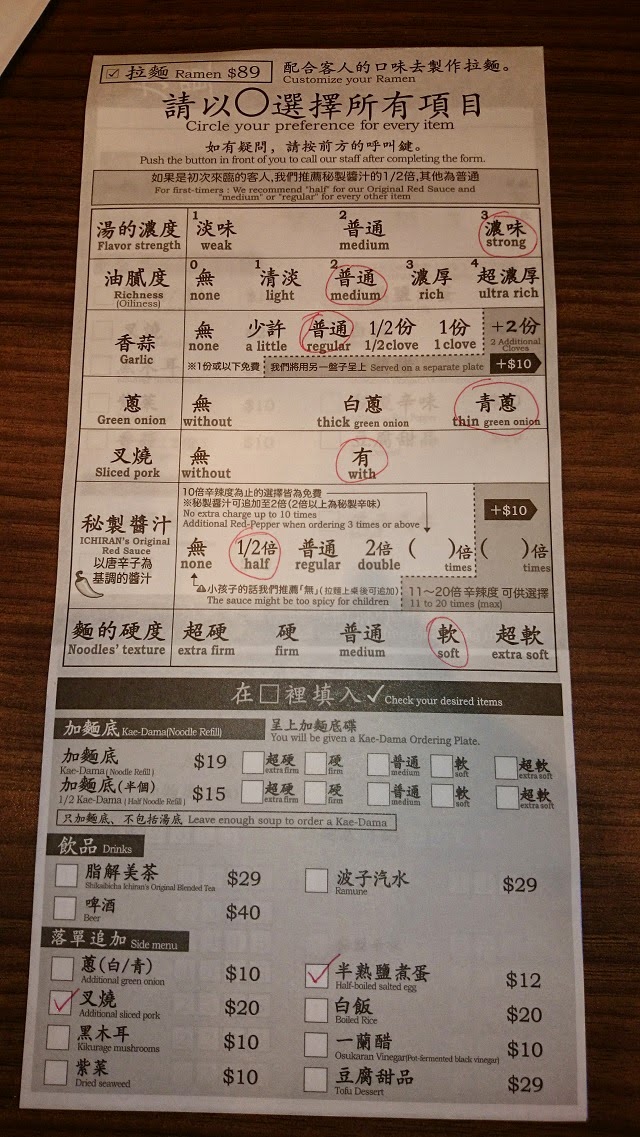 Five minutes later a hand passes through a steaming hot bowl of ramen through the window and the same hand closes the window blind.

Slurp, slurp, omnomnomnom, yum yum. One of the best bowls of ramen I’ve ever had, and I didn’t have to look at or talk to another human. 🙂

I met a girl on my last night in Hong Kong and suggested that we go somewhere that local people eat. She brought up a website on her phone called Open Rice that is a user-generated content review site for local food restaurants. For any restaurant in Hong Kong you can see loads of food pics, reviews and overall ratings.

We chose a place nearby that looked good. Trying to find it was tough, we walked past it a couple of times not even noticing it. And no wonder,  the place was tiny. It literally had just one big table and a wall shelf.

I ordered extra spicy noodles with chive pork dumplings and fried tofu. It was pretty cheap (about 3 or 4 quid British) so I wasn’t expecting much, but when it arrived I could just tell from the presentation that my bowl of noodles was made with love. In most of the cheap restaurants in Asia they couldn’t care less about presentation, and just slap the meal into the bowl like it’s a dog’s dinner.

Not only was it well presented but it tasted incredible. Incredibly spicy but that’s what I asked for, and very meaty dumplings full of flavour.

The chef, who was the same guy that took our order, and seemed to be the only person working there, was very interested in my opinion of the meal. He asked me, through my friend who acted as an interpreter, lots of questions about the spiciness of the soup, texture of the dumplings, thickness of the noodles. It was obvious that he was really passionate about his food and he looked genuinely happy and proud when I told him it was perfect.

The restaurant is called 有緣小敍, which I guess won’t be useful to most of my readers, but it has no signs or anything in English. Its Open Rice page is here: http://www.openrice.com/restaurant/sr2.htm?shopid=47432.

On my way back to Bangkok I used flagship Cathay Pacific lounge ‘The Wing’ at Hong Kong airport. I’ve had gold status with Cathay since the start of the year which has the benefit of being able to use any Cathay Pacific or OneWorld Alliance (British Airways, Finnair, Iberia, Malaysian, etc. etc.) airport lounge, even when flying on a dirt cheap economy ticket.

One huge section of the lounge is a noodle bar where you can order (for free of course) from around 8 different types of noodles, made fresh to order. As if I hadn’t already ate enough noodles on my trip to Hong Kong, but what the hell…. 🙂 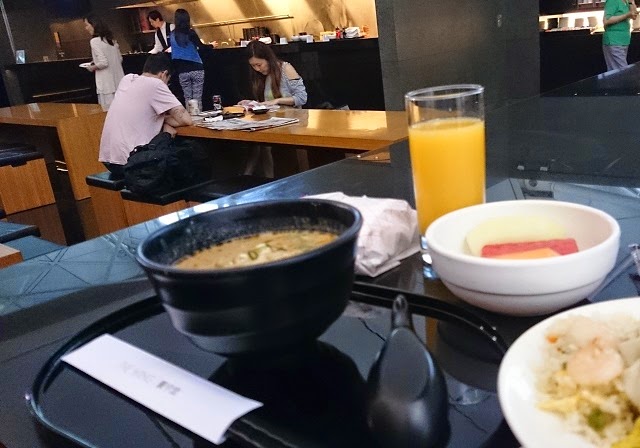 The best part of the lounge for me was the ‘Solus’ chairs. Specially designed seating areas for people travelling alone that give a lot of privacy.

I flew back to Bangkok feeling great. I hadn’t done any of the hiking that I had originally planned to do on my Hong Kong trip, but the shitty weather didn’t stop me from enjoying myself there and I still have a reason to visit again soon.