My main reference point for performing under pressure is my music background. I was immersed in music throughout my childhood: I was taught the piano from an early age, aspired to compose my own music, and sang in several choirs. I studied music up to A-level and learned piano to grade 7. Before my voice broke I was quite angelic—I was the boy who was invariably picked to perform the solo parts at concerts!

My music obsession continued into adulthood. I got into house/techno music, DJing, music production, and also played the keyboard in an indie/rock band at university.

While living in London in the early noughties I managed to blag a few DJ gigs. Latterly as technology has advanced, the technical side of DJing house music has become easier (modern software can automatically synchronise two audio tracks) but the old-fashioned method of mixing one dance track into another was to beat-match manually, finely adjusting a pitch slider and physically manipulating the spinning 12″ record to bring the new tune precisely in time with the previous tune. It’s skilful and requires a keen ear—and it sounds really bad if you mess up!

We’re all human and mistakes are all but inevitable; in poker, one can only strive to make as few errors as possible. Much of the time I’m playing for relatively small stakes on the internet; most errors of judgement might cost me a few hundred pounds at worst. It’s the nature of tournament poker however that some small percentage of the time, one’s decisions REALLY matter. You just have to hope that when you’re playing for tens of thousands of pounds on a GUKPT final table, it’ll be alright on the night—that those months and years of practice and study will come to fruition, and that one will keep a cool, clear head.

Like any worthwhile skill, to achieve competency in house DJing, you put in hours and hours of rehearsal at home. Practice doesn’t always make perfect. At one of my early DJ gigs at a nightclub in Brixton, I vividly recall fluffing one of my mixes: I failed to bring the new tune in early enough, so there was an abrupt dip in the overall volume level. Momentarily the beat was quiet enough that I could actually hear a reveller on the dance floor quip sarcastically, “that was good…” 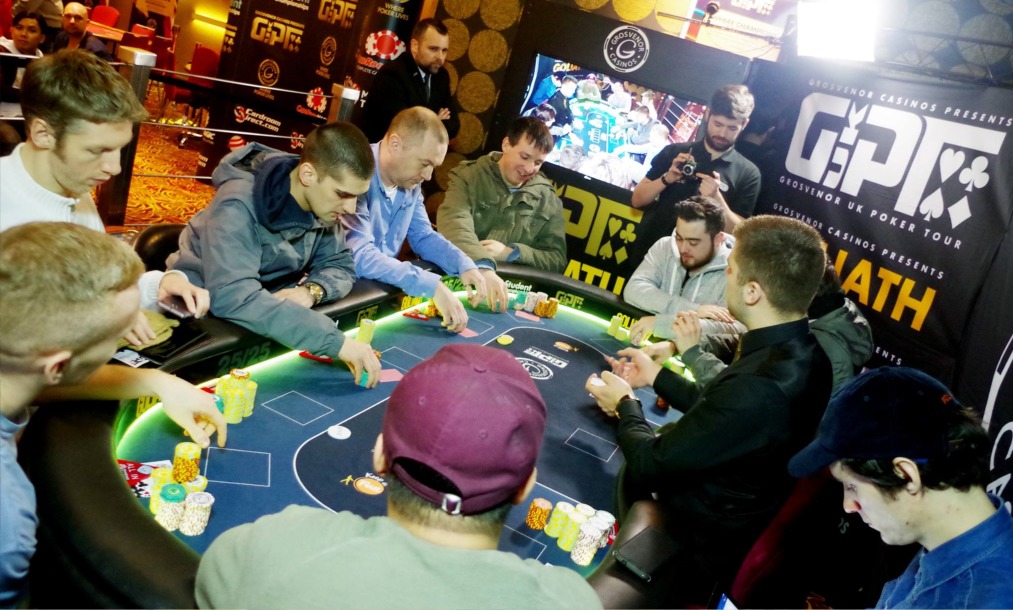 In live poker tournaments the pressure has got to me a couple of times in the past, but although I was nervous in Manchester, I didn’t make any colossal errors when the heat was on.

Last week I went to visit study buddy Al for a celebratory meal, then we fired up YouTube and replayed the final table over a few pints of Guinness. The live streams are great for reviewing the play and learning from one’s mistakes. Having reviewed the footage, two mistakes jumped out at us, both pre-flop: I limped a hand I should have open-jammed in the small blind, and I made one badly judged 3-bet bluff.

I also laid down the best hand a number of times, and allowed myself to be exploited in one or two spots, but these aren’t necessarily “errors” in an objective sense. (There is a saying that if you never fold the best hand, you are not folding enough.) Although I could have played better, on the whole I’m very satisfied with my approach and my emotional control. 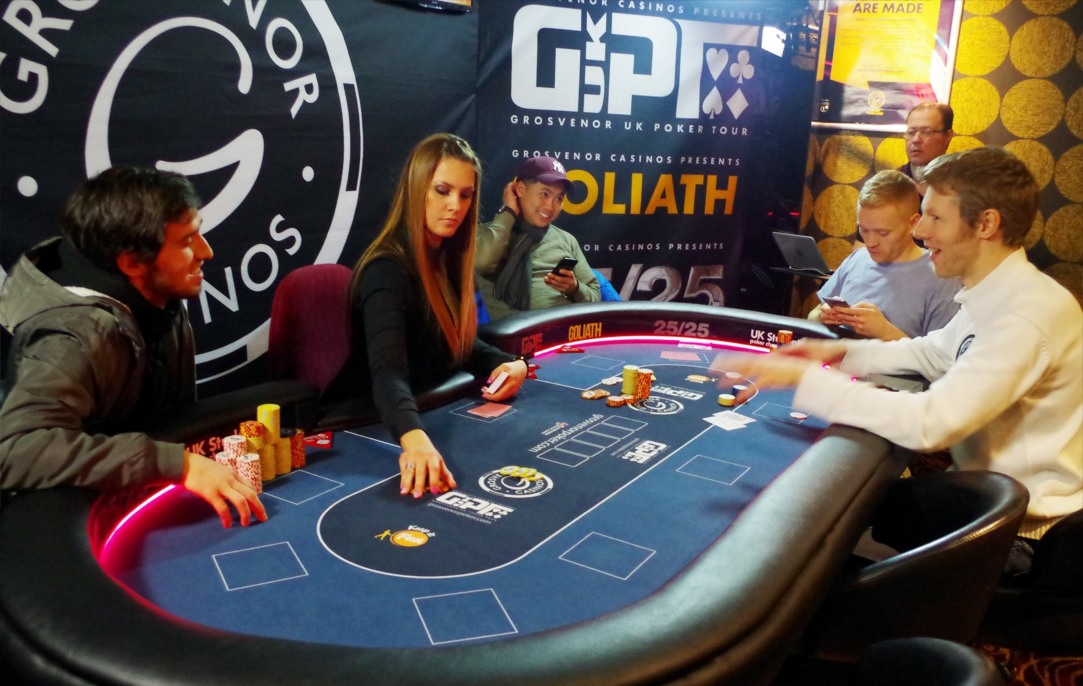 I’m not a fan of deal-making in tournaments and have seldom agreed to chops in the past. I did agree to a deal on a “25/25” final table last year, because I felt tilted and was self-aware enough to predict my skill edge would be diminished. (I was also under a degree of ICM pressure. Sure enough, after we agreed the chop and played on for the trophy and for an amount of money set aside for first, I made two bad calls that I like to think I would not normally have made, had I been on my A-game and my judgement less clouded by emotion.)

When we got five-handed in Manchester, two players expressed strong interest in a chop. I will say it’s the first time I’ve faced a deal-making opportunity where the impending pay jumps felt non-trivial to me. Nevertheless it seemed a clear mistake to deal. Blocking tournament deals can make one a pariah, but if you play professionally it’s important to take the long view in poker. With my two toughest opponents having the fewest chips, and the two biggest stacks belonging to myself and a much less experienced player, it was a no-brainer to play on.

It’s nothing to do with ego, or delusion that I couldn’t lose from this point. The two pros would be extremely dangerous were they to double up, which could easily happen. But on the whole, an ICM chop from this position would not reflect my true long-term expectation.

Things changed four-handed. The pros had both doubled, I had only a slender lead, and the least experienced player now had the fewest chips. The blinds increased, meaning post-flop edges would be harder to realise. Crucially, the last elimination meant the most aggressive player now had direct position on me, and one of his strengths is his grasp of ICM and stack leverage. I still had an excellent shot at winning the tournament outright, but to have the best chance of doing so I’d have to embrace the variance. He and I would be the most likely players to clash. Thus while I fancied my chances of finishing 1st, I felt my odds of a comparatively underwhelming 4th place finish were also great.

With edges being slimmer, variance higher, and my advantage over the amateur being somewhat offset by my positional handicap versus the aggro player, I agreed to the proposed ICM deal which awarded me twelve pounds shy of £47,000. My biggest ever payday! 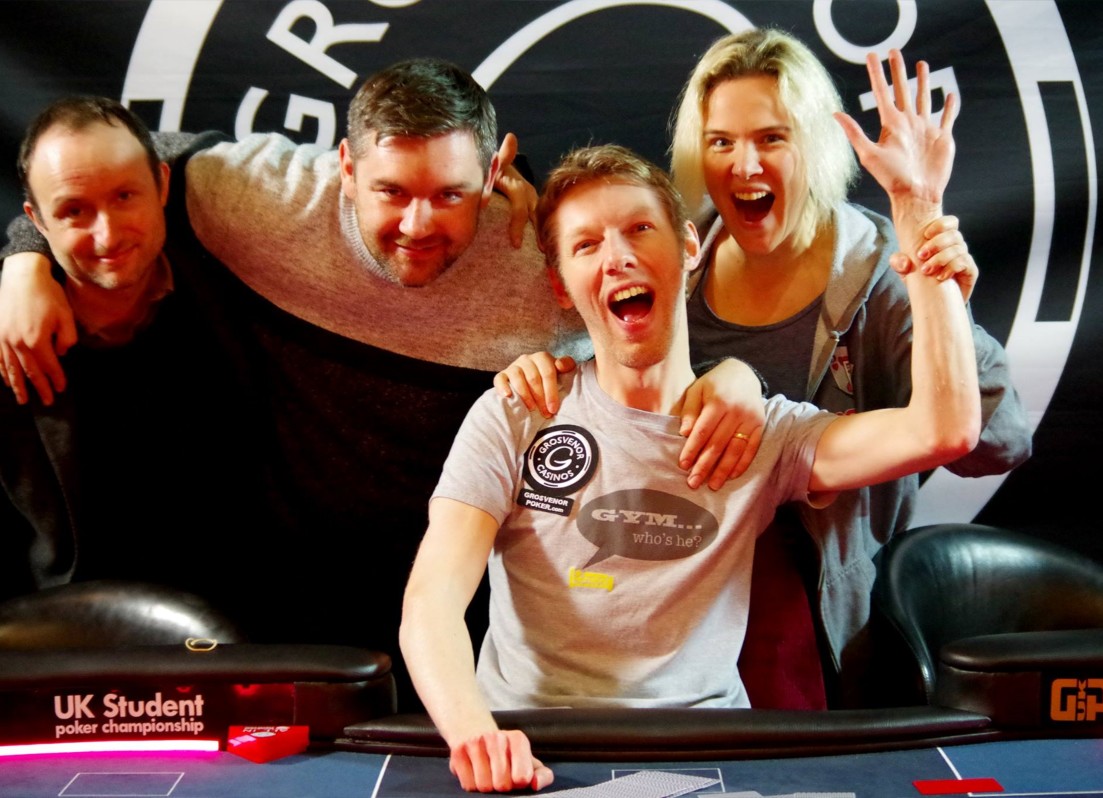 Luck Of The Draw

My victory is all the more gratifying, and even a little surreal, because I don’t feel like I ran especially hot in the tournament. This is not a thinly veiled boast about how I crushed without cards; there was just a lot of grinding. Poker players have famously selective memory, something I try to keep in mind as I rack my brain for poignant hands.

I did receive a cheap double-up very early on day one, after rivering a gutshot to the nut straight, which gave my foe a one-card straight—though for perspective I had only committed 1500 chips of my 20k stack prior to spiking the gin card.

I flopped two sets on day one. A scare card meant I was unable to extract three streets of value from Ellie Biessek, who made a good laydown with top-pair-top-kicker. My other set, I figured I was up against a much weaker range and thus only bet flop and river.

I also called a chunky turn jam versus Ali Mallu and held versus a naked flush draw. Besides those hands, there were not many easy chip-ups. Calling a 9.5bb shove with TT on the money bubble (risking 1/3 my stack) and mercifully holding versus A-Q offsuit was perhaps a pivotal hand.

Much of the variance in tournaments is “hidden”. Every single hand that you DON’T get dealt KK versus somebody else’s AA, congratulations—you just got lucky. It feels fair and just when our pocket tens hold up, all-in pre against ace-king, but in reality we have run far above mathematical expectation, even considering our modest equity advantage. To triumph over a field of 268 players one needs to tiptoe across an invisible minefield. 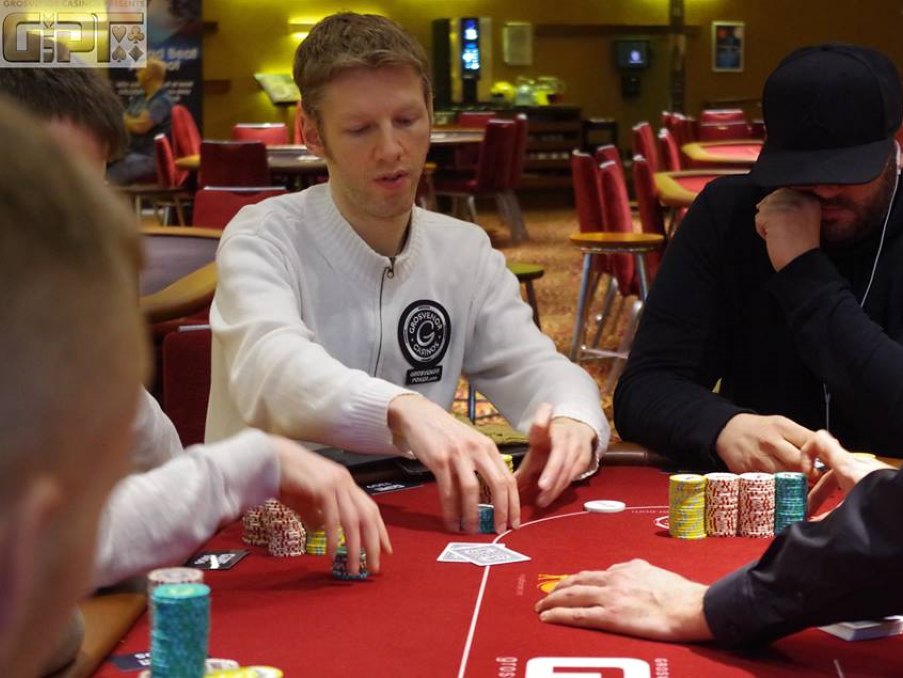 I came into day three with 19bb, half the tournament average (ranked 15 of 20 in chips) and promptly lost an annoying pot that set me back to 12bb. I remained patient, passed a couple of close spots, and was fortunate enough to get a series of shoves past the table; then with thirteen players left, I won a flip versus a very short-stacked Andrew Christoforou. From here I was able to gather some momentum.

My enduring memories prior to day three, however, are of being rivered a LOT! It was anything but plain sailing, my aces, and queens, and two-pairs being outdrawn left and right…

A lot of good poker players cashed in GUKPT Manchester. At the start of day three I remarked to Mark Dyson—an excellent player, who had just 1bb more than me—that “we will look like heroes if one of us beats this field!” I kind of hoped to get heads-up with Mark, not for EV reasons of course, but it would have made for a fun match. Mark and I have spent some time studying together and we know a bit about one another’s games. Against the odds, we both ended up in the four-way chop, taking the two biggest slices of the prize pool (alas the heads-up battle was not to transpire).

Bach To The Grind

I almost never feel burned out from poker; it’s rarely difficult to motivate myself to play or study. There are dozens of good poker events over 2017 and I could easily find myself playing live poker for half of the year—we’re spoilt for choice in the UK. I shall be following the Grosvenor UK Poker Tour around the country, as I won the GUKPT ‘Passport’ promotion at Christmas, awarding entry into every Main Event. I’ll also be playing as many 25/25 Series tournaments as I can in the north of England.

Although I regard myself as chiefly an online player, I caught the live poker bug very quickly when I had my first win in a live competition in 2010. It was only the third or fourth game I’d ever played in a casino and I felt like a figure of fun, fumbling with my chips, struggling to remember the size of the pot, and so on. But there is something uniquely exciting about catching some momentum in a live game, building a stack, trying to keep your cool. The money is bigger than most online games too. I enjoy the social side and I’ve met many great people through poker. This has even resulted in me travelling to some countries I otherwise perhaps would not have visited. On my poker travels I have befriended a Swede called Nils, who last year invited me to spend a week with him and his friends in Gothenburg, socialising and playing poker at his local casino. 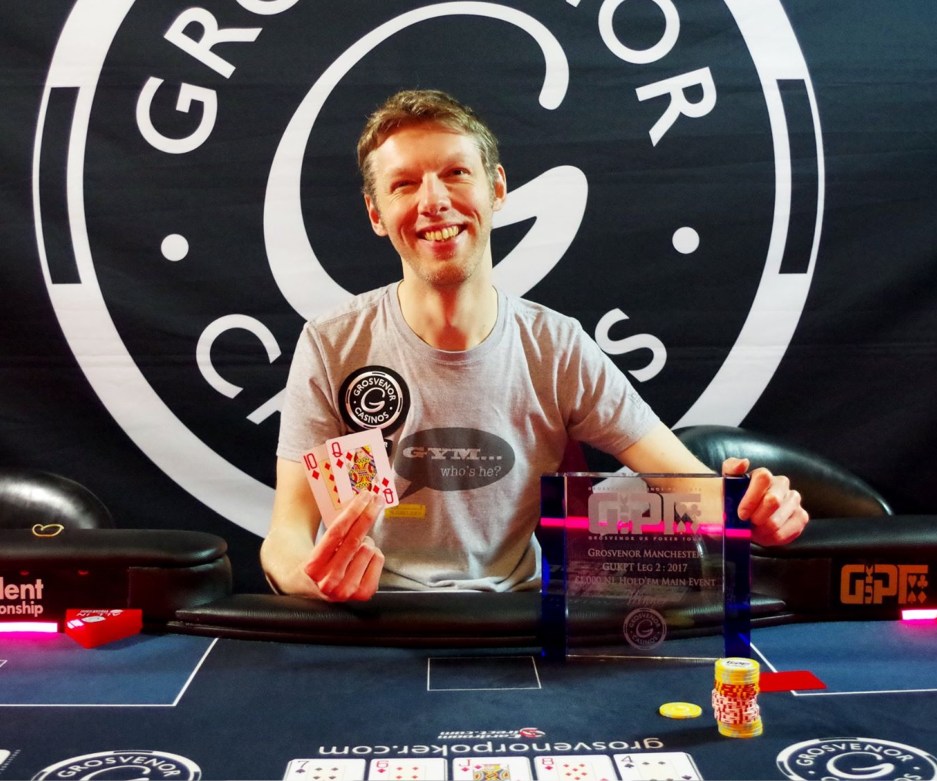 The GUKPT score won’t affect my game selection much. I’ve never aspired to play high stakes just for the sake of it, and the vast majority of the tournaments I grind online have buy-ins of less than £100. In the long term, the one big tournament I do aspire to play annually is the WSOP Main Event. I’ve satellited in twice before, and reached day three on one of those attempts (falling short of the money)—but I wasn’t as good a player back then. Ultimately I’d like to qualify or buy into the WSOPME each summer because I feel it’s a game I ought to be competing in.

In the shorter term I shall be continuing to grind up my bankroll, study, play, study, play! My next live event will be GUKPT Edinburgh which kicks off on Sunday 26th March, the £550 Main Event commencing on Thursday 30th March. 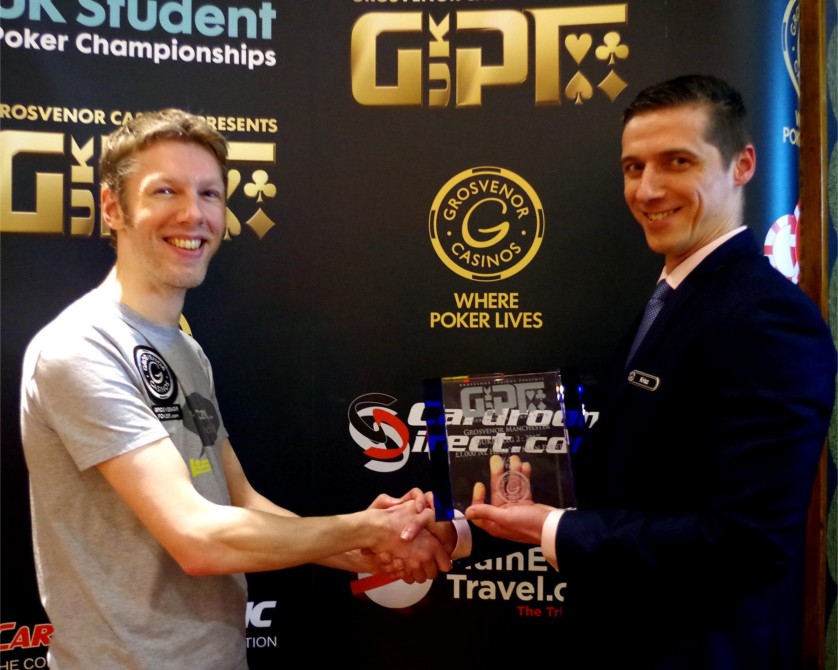