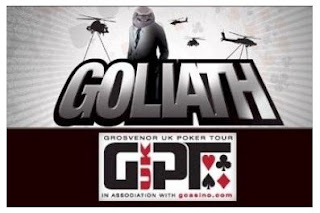 It’s that time of year again, Goliath week at the G Casino Coventry. (Sunday 19th Aug – Mon 27th Aug 2012) If there is a better £100 tournament anywhere in the world I’ve never played it. This is the one UK tournament of the whole year that I feel is a “must play”.
Sadly this year I’ve had to make the decision not to play it!

I’m not on holiday, I’m not busy working and I don’t have a family emergency. Not only that I will actually be at the G Cov virtually every day from Sunday 19th onwards.

The reason I can’t play it is that the GUKPT have decided in their infinite wisdom to hold leg 9 of the GUKPT at Coventry in the same week as Goliath week. Last year Goliath week at G Cov and the G Cov leg of the GUKPT were in separate weeks.
Because I have been lucky enough to win a seat for FREE into the GUKPT £1,070 main event (see “running good” below) which clashes with day 2 of the Goliath it means I’ll have to miss the Goliath. It’s crazy to enter a comp knowing I can’t play day 2.
I think it makes sense to play the main event, it will get between 150-200 runners not the 2k-3k runners the Goliath will get and the first prize will be about the same for both. Even though there will be literally thousands of easy chips on offer from the average player in the Goliath as opposed to the stronger field in the main event, I’d rather play the ME.
I’ll certainly learn a lot more being against the better players in the ME and the structure is awesome for me. (20k chips, 1hr clock). I’ve played these events before and I feel I can do reasonably well if things go my way.
G Cov Going Forward
On the positive side the Ricoh will be packed to the doors throughout the whole GUKPT/Goliath week and I’m sure that all the GUKPT side events will have increased numbers due to the Goliath being on in the same venue.
I’m guessing if you are a freelance part-time poker dealer, you will be working at G Cov next week! The Goliath will have approximately 1,000 runners for each of the 3 day 1’s and also there is at least one GUKPT side event every day and also afternoon satellites. In the original card-room there will be 20+ cash games going on throughout the busy times. The casino is open 24hrs throughout the week.
When I went to G Cov last Friday Ian Bryan and Deena were training dealers and it is the first time I’ve ever been in a casino that had more dealers than players. Apparently this year they are keeping on some of these extra dealers permanently after the Goliath so every comp at the G Cov will be fully dealer dealt in future.
It needs it, as this venue is so good it’s a shame to spoil it with something that infuriates players so much as having to self-deal.
There are things I’d change at the G Cov to make the poker experience better for players but on the whole I still enjoy playing there. Mainly it’s because the people (customers and staff) are so nice, it’s rare to play anywhere these days where quite a lot of the players are less interested in winning than they are in just having a good night out. For me I feel I’m having a good night out when I’m winning!
What I like about the staff is, for the most part, they have a smile on their face. Yes some of the younger/newer dealers could be better at taking control of the game, but I’ll take someone who has the right attitude and a cheerful disposition over a “Tip Top” dealer with their arse in their hand any day.
I don’t wish to name the “Good/Not so Good” for fear of offending but I feel it’s only right to mention a young guy called “Sam” who works F/T in an office based 9-5 job then comes and deals evenings/nights at Cov. The guy is always in such a good mood and frankly he can’t be right in the head. If I worked an 8 hour day job then came to deal cards for 8 hours I’d be as miserable as sin. Yet he is always smiling and does a great job.
Someone else who deserves a special mention is “Delma” who keeps the poker players fed and watered while we’re playing. Again like Sam she’s far too happy not to have a screw loose, but the card room wouldn’t be the same without her. She is always smiling and has a great sense of humour which she needs putting up with us lot. I always chat to her and she really looks after me. It will be a big advantage during Goliath week, with over 1,000 players in the room, to be able to give Delma a wave from 100 yards away and know she’ll bring me a cup of tea over ASAP. 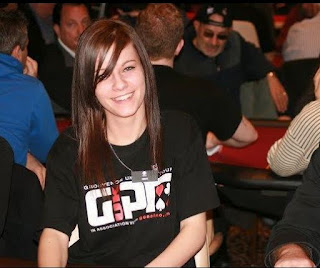 Obviously, regarding the dealers, I don’t have favourites so it’s merely a coincidence that I’ve put a photo of Nikki in this blog post.
Running Good
I do run well occasionally, and I’ve just had a very good run at G Cov winning/chopping 3 consecutive tournaments. Fri 10th Aug, Sun Afternoon 12th Aug, Sun Eve 12th Aug.  Details as follows.
Friday 10th.
I chopped the normal evening comp 3 ways with Tim Millward-Brookes (who, to no one’s surprise, has managed to get himself banned from the casino since then*) and Andy Bailess. This was fun and the 3 of us had a good laugh throughout the FT.
Sun Afternoon.
On Sunday afternoon (4.30pm) I played the £150 + £10 satellite which had 3 seats guaranteed to the £1,070 main event (ME). I’d actually won my seat into this satellite via a Free-To-Enter “step 1” satellite. There were re-buys and an add-on allowed in the step 1 but I didn’t have any!
There were 13 entries when the £150 comp started and 1 late comer. All of the entries bar 1 (Nic Markou) either won their seat via a step 1 like me or used GUKPT vouchers to enter. G Cov runs loads of comps that have extra or added prizes such as satellite seats or GUKPT vouchers which can be used for tourney buy-ins.
If you play there regularly and are a competent player it is relatively easy to accumulate a big stash of vouchers that you can use in the GUKPT week. Freddy Russell (who plays 5 nights week at Cov has thousands of them)
There were two tables to start with and Nic was the only player that I would rather avoid and luckily he was drawn on the other table. 4 players who had won seats via Step 1 Sat’s didn’t even bother turning up!
It was funny to start off with as on my table of 6 players 3 were empty chairs and I had position on the only 2 “live” opponents I had.
It meant I was able to steal the dead blinds quite often until the latecomer was seated to my left.
As we inched towards the final 10 players Nic and I were Chip Leaders on our respective tables. I had over double the average chips and Nic had even more.
Anyway when we made the FT Karl the TD asked if we all agreed to remove the dead stacks from the players who hadn’t turned up. We all agreed so there were just 6 left playing for 3 seats.
I had a terrific seat draw immediately to the left of Nic Markou and to the right of the shortest stack, who happened to be the totally charming Bill Maynard. Bill the actor best known for playing Claude Jeremiah Greengrass in “Heartbeat”, and the title role in “Oh No, It’s Selwyn Froggitt!” is a regular at G Cov and he’s a real class act. 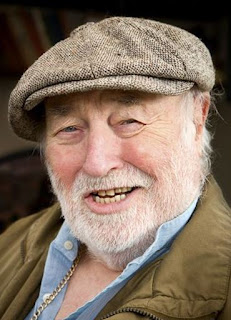 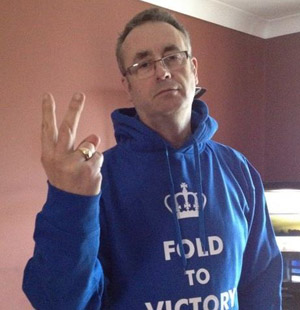 Oh Yes he’s banned, Oh No he isn’t!
With all the organised chaos of a pantomime Tim’s back. Most of us hadn’t stopped cheering from the news that he was banned and he’s back! Apparently after a phone conversation with the manager it’s all been sorted. I’ve just spoken to Tim and I think he’s realised he’s had an escape and will be a little more considered in his approach to players and staff in future! Well for a week or two at least. So the good news is Team “Fold To Victory” has it’s captain back and there is more dead money in the place! 🙂