Two years ago I published a blog about living in Thailand. Since then I’ve written lots about my travels overseas to other countries, however an update on the place that I spend most of my time is well overdue. 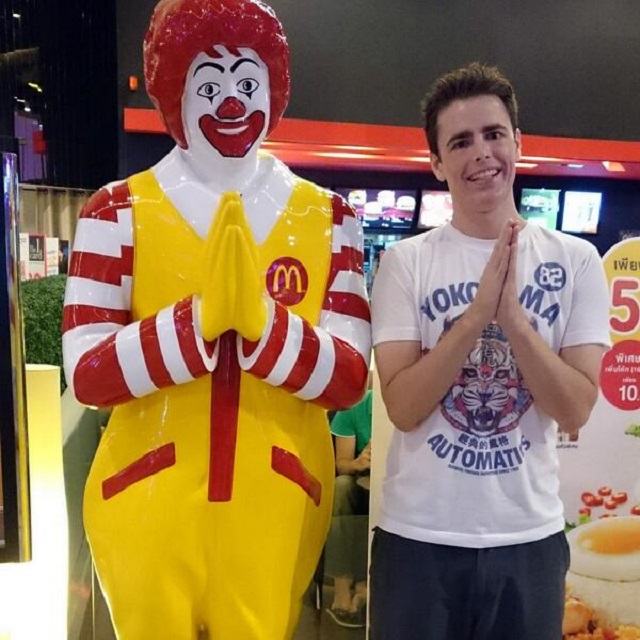 The weather, the food and the girls are still hot. The only thing that’s changed recently is the cost of living, for me as a Brit at least. Our currency, Pounds Sterling, is now worth about 25% less against the Thai Baht than it was earlier in the year before the damn Brexit vote.

What makes things worse is knowing that most of the Brits who voted for Brexit never travel overseas, other than a yearly visit to some garbage tourist-trash resort in the south of Spain, so the currency devaluation won’t even affect them.

It’s ok though. Nothing ever stays the same in this world. You just have to adjust to the new normal. And that’s why I’m now taking girls on ice cream dates rather than for dinner. 🙂

Having said that, Pad Thai and Mango Sticky Rice are still cheap enough to eat on a daily. And after eating them literally hundreds of times over the last 6 years they haven’t become any less delicious.

One of the things I love the most about living in Thailand is eating Mango Sticky Rice on a daily basis. #Thailand

I’m still living in Thailand on back-to-back tourist visas, which allow me to stay for 3-months before having to leave the country and come back. I don’t mind the hassle so much as it forces me to travel somewhere new every few months when I might otherwise be feeling too lazy. I’ve had some awesome experiences on those trips as you’ll know if you’ve been reading my trip reports.

I did have an education visa while I was studying at Thai language school. It’s handy being able to speak the local language but I didn’t feel like it was worth the time and money I was investing in it.

After 6 months of school I quit and instead spent that same time and money on a gym membership. Since then, I’ve made made almost zero gains with my Thai language skills but a whole load of fitness gains and that’s fine with me.

Outside of the gym I enjoy running in the parks. Yes, Bangkok is a massive concrete jungle, but it does have a few parks. My favourites being Lumphini and Benjakiti. They’re great places to enjoy open space, exercise, fresh air and see some wildlife in an otherwise crowded and polluted city.


And the wildlife doesn’t get any better than the massive monitor lizards that roam around Lumphini park. I always stop to say hi to them when I’m out for a jog.

I’ve mainly stayed put in Bangkok during my time in Thailand. A lot of other poker players who have moved here end up living in Chiang Mai (chill place in the mountains) or Phuket (touristy beach resort) or even one of the small islands. I like those places too but for long term living I much prefer the big city with the big modern malls, 24 hour gyms, 24 hour restaurants and metro / sky trains to get around.

I grew up in a small town in Scotland where there was basically nothing other than a small corner shop, so city life has always been attractive to me and Bangkok is a very liveable city. I’ve met plenty of people who’ve been here as tourists who can’t imagine it being a good place to live, but then I find out that 100% of their experience of Bangkok was staying in some filth-ridden backpacker area like Khao San road, which is 0% of my experience because I wouldn’t step foot in that area if you paid me.

Having said that, I have travelled outside of Bangkok a few times in recent months, to Hua Hin, Chonburi, Chiang Mai and Nong Khai. No visits to any beaches. I know that’s what most people consider to be the best part of Thailand but with ADHD and Scottish genetics I’d be bored and sunburnt after 5 minutes.

My favourite experience so far has been sharing a picnic with some monkeys on top of a small mountain in Hua Hin.

I was with my (now ex, thankfully) Ukrainian girlfriend who grew up in Hua Hin. As always, having someone with local knowledge to show you around ensures that you have exceptional experiences when travelling.

We were visiting a temple that had loads of monkeys running around. I was extremely excited to see them but they were really aggressive, stealing food and hissing at people. She told me that these monkeys are real assholes because they are constantly being annoyed by tourists all day, every day, but she knew where some friendly monkeys live at a mountain near a temple that tourists don’t visit.

So we travelled for half an hour on our rented motorbike up some steep roads, stopping off at a 7-Eleven on the way to buy some food for the monkeys.

Having a picnic up a mountain with friendly wild monkeys. #HuaHin #Thailand

I had a taro-filled bun in my hand that I was feeding to one monkey, but I got distracted by another monkey and closed my fist. The monkey that I was feeding politely tapped my hand until I opened it again and fed him another piece of bun, it was adorable. I’m sure if I tried to feed the monkeys in the tourist area they’d have ripped my fingers off. 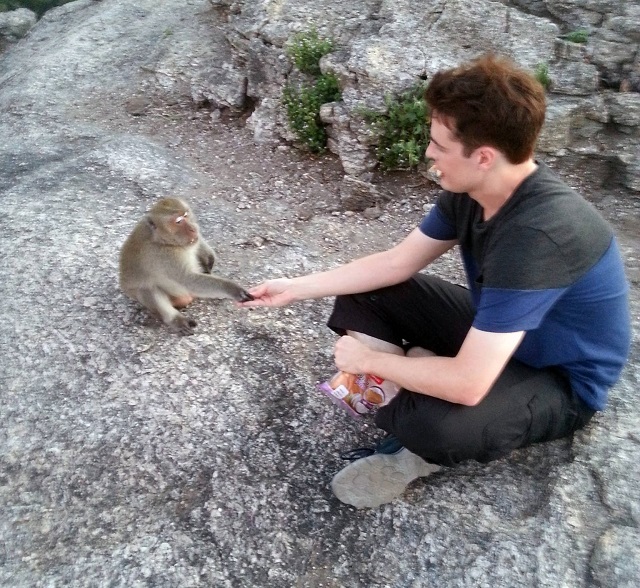 Over the last couple of years quite a few poker friends have visited Bangkok.

The Polish fish otherwise known as DaWarsaw was here for 6 months, so it was nice that I was only the second whitest person living in Thailand during that time. 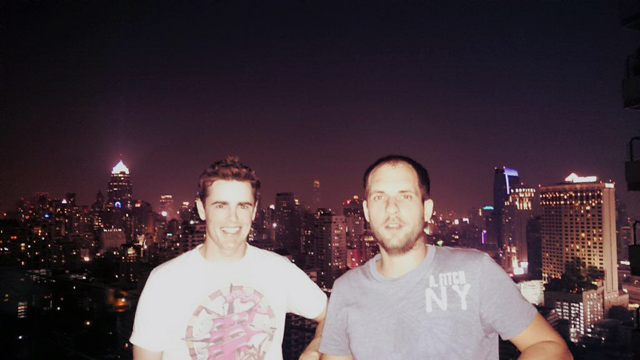 Bad news for him was that the poker site that sponsors him wanted him to live in Poland, so he had to return home. Good news for me was that he didn’t have time to sell his stuff, so I was at his condo an hour before he checked out seeing what I could scavenge.

I’m now the proud owner of a large leather office chair worth 6,500 baht. My big Scottish ass is very comfortable as I write this blog.

My friend Clay, a poker dealer from Las Vegas who I randomly met on a bus in the middle of nowhere in South Africa during the 2010 World Cup, came to stay in Bangkok for a few months. And that was all the time he needed to fall in love with a beautiful Thai girl. They are now married and living happily ever after in the states.

Another poker friend, Kolja from Germany, also came to stay in Bangkok for a short time and fell in love with a Thai girl. He now travels between Germany and Thailand regularly, trying to balance having a full time job as a teacher (if you can call being a teacher full time, they get a ton of holidays) with having a full time Thai girlfriend.

As for me, nearly 6 years here, and the only Thais I’ve fallen in love with were those cute little monkeys that I had a picnic with in Hua Hin.

Spacegravy, sometimes known in real life as Grayson, who I’ve known since battling against him in $16 SNGs over 10 years ago, was here for a short time to check out Thailand as a potential place to live.

Having an ex PokerStars Team Online meetup in Bangkok with Spacegravy. #Bangkok #Thailand

As an American pro poker player, he’s basically a refugee – unable to play online in his home country. The land of the free they call it. Unless you want the freedom to gamble with your money over the internet that is.

Grayson liked Thailand but eventually decided to move to South America to make travelling to and from the States easier.

Max Silver and his Irish missus passed through Bangkok on their honeymoon tour of Asia. I planned to take them to a fancy rooftop bar. And we were actually in the place, for all of about 15 seconds before being politely asked to leave.

I did have a plan B though, and somewhere that Max could meet the dress code. I took the honeymoon couple for a romantic stroll down Soi Cowboy, one of the world’s most famous red light districts. 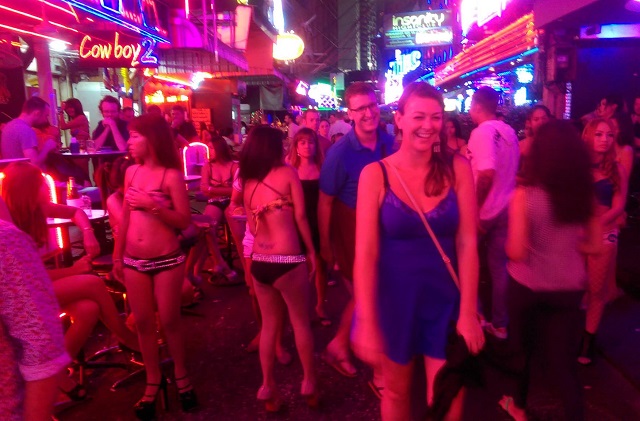 As you can see, they loved it.

And knowing that Max is a big foodie, I took him to my favourite Thai restaurant which is a small family run joint hidden up a narrow residential street. Flip-flops allowed. I’ve had several of the best meals of my life in that place and I always take visitors to Bangkok there, to give them an experience they wouldn’t get as a regular tourist following a guidebook.

Another Max, Max Greenwood, who I first met in Vegas over 9 years ago, flew into Bangkok from Canada with his girlfriend to start their tour of South-East Asia. Just like the other Max, he is a massive foodie so I took him to that same awesome restaurant. Oh, and to Chatuchak Market for some cheap but delicious coconut ice cream

Introducing @max_greenwood and @calscottt to coconut ice cream in #Bangkok. Check out their travel pics at @highheelsandherocalls

Vers and Cardlo69, two SNG players who I’ve known online for a decade, were in town while backpacking around Thailand and neighbouring countries. I arranged to meet them in a fancy new mall for lunch and the pair of them turned up looking like they were dressed for the beach.

They were a bit offended when I burst out laughing upon seeing them. I’m certainly no fashionista – in fact I’m a right scruffy bastard who rarely has an opportunity to look down on anyone else’s choice of clothing. However this was one of those rare occasions. “I mean, come on, you’re in a mall in a big city wearing stringer vests, small shorts and flip-flops for crying out loud!” I told them.

As we ate lunch I learned about how they were getting scammed a lot, including paying almost triple the correct fare for their taxi from the airport, which they didn’t even know was too much until I told them.

“No wonder”, I said, “If I was a Thai that was looking to scam some tourists and I saw you two walking down the street wearing beer logo vests and looking clueless, I’d be sure as hell I found myself a couple of marks”.

They were getting the worst experience of Bangkok, while at the same time thinking it was good. They told me the foot massage they had on Sukhumvit Road was great and the Thai food they’ve been eating on Khao San road was excellent. Then I took them to a big fancy spa that is as cheap as than the small crummy massage joints on the tourist streets but actually has properly trained, professional staff, and of course to my favourite local Thai restaurant.

The bar was then set miles higher for what constitutes an excellent massage or meal in Bangkok.

Some of my best experiences of travelling were when I had someone local to show me around. Since I’m practically a Bangkok local at this stage, it makes me happy that I can help my friends have a much better experience of Bangkok when they visit.

So here’s a good tip for any of my readers planning to visit Bangkok. If you want the fastest, least safe but most fun way to get around the city, look for the guys wearing orange jackets.