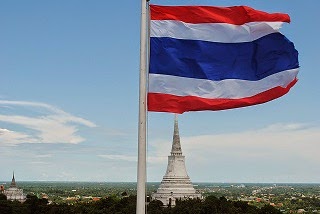 In March I moved back to Bangkok – the city that I previously called home.

I had originally settled in Thailand in early 2011 but by the end of 2012 I had to make a tough decision between staying in Thailand but losing my PokerStars contract or moving back to the UK immediately and keeping it.

PokerStars had decided that they needed their Team Online representative from the UK to actually live in the UK and physically be there for most of the year, which although I wasn’t happy about it, was a reasonable enough request. It was a tough ultimatum for me though as I was very well settled and happy in Thailand, but I also very much enjoyed being part of the PokerStars team.

I decided that it was worth making sacrifices to remain in the team, so two weeks into the new year of 2013 I cancelled the lease on my Bangkok condo and flew 6,000 miles to Edinburgh on a one-way ticket with all my belongings.

It was kind of sad that I’d been away for two years and there was nobody to greet me at the airport, but that’s what happens when you don’t keep in touch with anyone. Instead I was greeted by a blizzard and a ride in a taxi that was 10x the price of the same length of journey in Thailand. Welcome home Dale.

I had been back in Scotland for less than half an hour and was already experiencing a massive culture shock, as if I was a foreigner visiting for the first time. I love my country but the term ‘rip-off Britain’ didn’t come from nowhere and it’s just not a place to be when the weather is awful. Problem is that the weather is awful most of the time.

The great comedian Billy Connolly once said that there are two seasons in Scotland – winter and July. The big yin also said that there’s no such thing as “bad” weather, there’s only the wrong clothes. And there I was, in the middle of a Scottish winter with a suitcase full of shorts, T-shirts and not much else.

I never did go shopping for the right clothes. I just ended up basically hibernating for a few months. After living in Thailand for two years I found it just too difficult to adjust to being back home in Scotland. I went from being happy, social and healthy to the polar opposite. In Thailand I was outside jogging almost every day – followed by a massage, eating healthy delicious food, and dating very attractive girls. Back in Scotland it was too cold for jogging, healthy eating was more of a struggle and even unattractive girls looked at me like I was dirt.

I could have made a better effort of dealing with the situation like actually going out and buying winter clothes, trying to get in touch with old friends, making new friends and joining a gym but the misery I felt was so overwhelmingly crippling that all I could do was sleep all day and stay up all night eating junk food and playing online poker.

After those first few months of hibernation things did get a bit easier. About the same time that the weather got milder I re-discovered my favourite place in Edinburgh – Arthur’s Seat. A dormant volcano that is a great place to exercise and get a healthy dose of fresh air and beautiful scenery. I had gained a whopping 10Kg in weight and barely seen daylight since the start of the year so it was about time for me to get outdoors and work up a sweat.

I had also decided to make the most of being so close to European countries that I hadn’t had a chance to visit yet. I made my first ever trips to Croatia, Slovakia, Austria, Hungary and Bulgaria.

It was a fun summer, but it went by so fast. Winter came back around and again I became miserable and introverted. It’s amazing how a change in season can have such a massive affect on your mood and your life.

Thankfully the location requirement was taking out of my 2014 agreement with PokerStars and instead I agreed to play in 5 UKIPT events during the year as an alternative location restriction.

This gave me the opportunity to move back to Thailand and make long haul commutes to the UKIPT events. Even though flights, hotels etc. would cost me more than the value of the tournament buyin and I’d lose at least another 2 full days from long haul flying each time, it was worth it for me to actually live where I wanted to live.

I didn’t waste much time before packing up my stuff and flying to Bangkok, where I settled back in really quickly. I moved into a hotel with a room overlooking the BEC Tero football stadium and re-arranged the furniture so that I had a nice view while I played online poker.

I stayed in that place for a couple of weeks while I casually looked around for a place that was away from the main tourist and expat areas. I think those areas are good if you are visiting Bangkok as a tourist or just for a few months but I wanted to live somewhere that was a bit quieter, much more real and way less expensive.

Anywhere that there’s a lot of tourists the price of accommodation and food is high (by Thai standards) and there’s a lot of crap to put up with like taxi drivers who won’t turn on the meters or not being able to walk down the street because 90% of it’s been taken over by shitty market stalls selling shitty tat to shitty people walking at a snails pace in their flip-flops and Singha vests. /rant

I know enough about Bangkok and speak enough Thai language that I can get around easily and do stuff like explain to a taxi driver how to go to some place that he doesn’t know or eat at restaurants where the staff don’t speak English.

I ended up finding a small hotel in an area that has a population of 98% Thai people but is still really close to a massive modern mall and a subway station, so great amenities and transport. Every mall has about two floors of restaurants and as long as you live close to a BTS (sky train) or MRT (subway) station you can get around Bangkok quickly, cheaply and easily.

It might sound crazy to some people to live long term in a hotel but living on my own all I really need is one big room and in Thailand long term hotel stays can certainly be affordable. For my room I’m paying 9,700 Baht (£176 GBP / 223 EUR / $302 USD) per month, excluding utilities. I could also find an apartment nearby for the same price but the hotel has the advantage that I can check out whenever I want, rather than sign a 1 year lease.

That was one of the main things I missed when I was back in the UK, real authentic Thai food that costs pennies. I actually went to Thai restaurants in Edinburgh a couple of times, but it just wasn’t the same. It was probably paying 20x the price that I’m used to that left a bad taste in my mouth.

Fortunately I returned to Bangkok just in time for Songkran, the Thai new year. Songkran is celebrated with a water festival lasting 3 days. Basically the entire city turns into one massive water fight during those three days. It’s an awesome event. I believe the tradition started off many years ago with people splashing water over each other to wish them good luck or clear their badness for the new year, or some superstitious nonsense like that. Now it’s just escalated into total water fight degeneracy.

During the Songkran festival you can’t simply live your life as you normally would and not participate. If you try to walk down any street someone will pour a pale of water over you or give you a good hosing down. You either need to embrace it and give as good as you get, or stay indoors for three days. No surprises what I did.

I hired a tuk-tuk for a day to drive me and two girls that I’m friends with around Bangkok so we could do drive-by shootings with our water guns. It was crazy, we’d have people on the backs of motorbikes shooting at us and every time we got stuck in traffic there would be kids with buckets of water running into the road to drench us.

And it’s not just kids that take part in this. It’s everyone. There’s grown adults everywhere with buckets of water and water pistols splashing around having a whale of time.

Songkran was a great welcome back to Thailand. I’m now well settled here again, but I still love to travel and Bangkok having a massive international airport is a great base to do that from. Since coming back to Thailand I’ve made trips to Seoul, Hong Kong, Helsinki, Marbella (wish I skipped that one tbh), Chiang Mai and tomorrow I will go to Penang Island in Malaysia for the first time.

I plan to stay in Thailand for quite some time but doing it on back-to-back tourist visas will no longer be an option as new immigration policies are being introduced. My plan is to join a Thai language school full time (4 hours a week, lol) in order to get an education visa. That way I’ll be living in Thailand more legitimately and also improving my language skills. Taking Thai classes was something I planned to do anyway. I think that if you plan to live in any country for a significant period of time it’s just downright rude not to learn the language properly.

…. and having fun experiences in Thailand.