GUKPT Manchester is on the horizon, and there’s no reason for you not to come and enjoy this great tournament, with cheap seats to be won literally every day!

Cardroom manager Lee Harrison has set himself the challenge of qualifying 100 players into the Main Event through live satellites in the club, and GrosvenorPoker.com will be sending another 25 or 30!

This is great news for everyone – local players will get the chance to get into the biggest comp coming to their area all year for a fraction of the £1k entry fee, and remember, over 100 of them WILL be playing.

Professional players will get the chance to play for a £200k+ prizepool against a pool of players not used to playing at this level, or for this amount of money. Of course, that’s not to say they can’t play at this level, and what better way to test yourself and move up the poker ladder than to get in on the cheap?

I, and many other professional players, started our careers by satelliting into bigger events, and GUKPT Manchester is perfect for others to do the same.

GrosvenorPoker.com has continued to run two weekly satellites, on Sundays and Tuesdays, with two seats guaranteed. These are regularly making three seats now, and will continue growing as the new site continues to attract new punters. If live satellites are more your thing and you can make it to the Grosvenor on Bury New Road, there’s a live satellite every day until the Main Event starts on March 2nd.

If ever you need an example of amateur players being able to mix it with – and beat – the pros, just look at what Simon Moorman achieved in 2009.

Father of one of the world’s best in Chris, but a completely inexperienced amateur who had never played a live tournament, Simon was bought into GUKPT Manchester by Chris as a birthday present.

With the instruction to just enjoy himself and be aggressive, Simon set out to have fun and ended up leaving with over £88,000 as the champion!

Simon’s run was bitter sweet for me as he knocked me out just before the bubble in a massive hand that gave him the chip lead that he barely relinquished all the rest of the way.

With three of four tables left, Simon opened on my big blind and I defended with pocket fives.

I flopped a set on an AK5 board and with us being the two chip leaders, set about working out the best way to get all the chips in the middle!

I checked and Simon bet, so I just called, hiding the strength of my monster. The turn paired the king. I checked again  but when Simon bet again, I decided to raise to try and make this pot as big as possible.

I didn’t think he’d fold an ace to me, never mind a king, and when he just called I knew 100% I was ahead as if he had me beat I expected him to move all in, not that I was folding!

The river was an innocuous  looking six and I shoved for value. Simon snapped me off and showed the ‘I knew it was coming’ winning hand of pocket sixes that had rivered a bigger full house!

I had to be stretchered out! 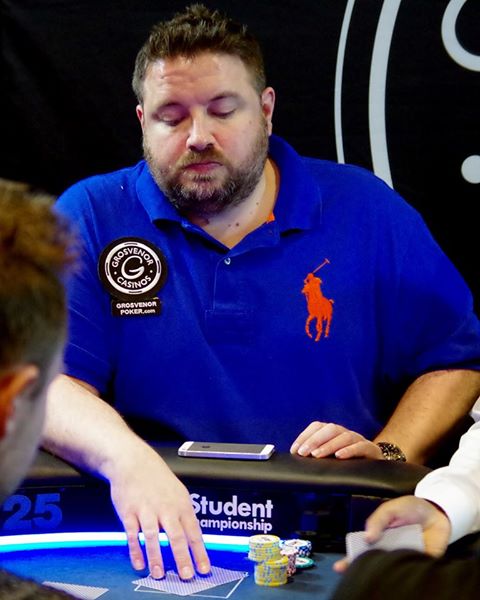 Another man who almost needed a stretcher, but for a far more fun reason, was local player Shehbaz “Baz” Hussain. Grosvenor Bury New Road regular Baz qualified, as he always seems to do, in a live satellite and parlayed that small outlay into a £43,000 payday when he chopped GUKPT Manchester three ways with me and Sunny Chattha.

Once we’d struck the deal, we played on for the trophy, but in a much more relaxed way! The General Manager of the Casino popped open a bottle of champagne and joined the three of us in a glass, and when Baz was knocked out, he stayed and watched Sunny beat me heads up in a half hour battle.

We then all decided to go to the bar to celebrate, and it soon became obvious that while me and Sunny were used to having the odd pint or three, Baz had over indulged a little for a man who doesn’t really drink!

I had to help his wife get him up and out of the casino after a great night celebrating, but why not, if you’ve just turned £100 into £43k you deserve a beer!

One downside of going deep in the GUKPT Manchester is you miss out on the chance to see the sights of one of Britain’s most vibrant cities.

Apparently the shopping is fantastic, but what I can confirm is the bars and restaurants are excellent!

Whether it’s the Northern Quarter, Deansgate Locks, the Printworks or anywhere in between, there’s loads to do and see.

We’d all rather stay in the tournament, but if not, head out and see some of Manchester.

It promises to be a great week for GUKPT Manchester, I’ll be there for the whole thing, why not come join me?!