I was slightly uneasy about putting the video on my blog and YouTube in the first place as I was worried that the dealer in the clip might get sacked because of it. After further consideration I’ve decided to take the video down for several reasons.

Firstly 2012 has been a tough year for me work-wise and I’d hate to be the cause of 2013 being equally tough for someone else.

What made me re-think was feedback from a few people who’s opinion I respect and the fact that within the first two hours over 200 people had viewed it. Apart from the people who normally read my blog others were seeing it as a result of people posting links to the video via Facebook and Twitter etc.

People love a bit of “gossip” and having the opportunity to poke fun at Genting would no doubt be a motivating factor in this  However even though stuff like this may at first glance appear “funny” it can actually turn out to be anything but funny if it ultimately has a detrimental effect on peoples livelihoods.

If the link to it had been posted onto a few of the busier poker forums, which it undoubtedly would have been in the next day or two, it could have been viewed by a couple of thousand people inside a week.

This would have undoubtedly have caused a bit of a stir and Gentings higher level management wouldn’t have been happy about it.

Upsetting them wouldn’t really bother me because if I have criticisms I’ll make them regardless but often these days it’s so easy for the higher management to just sack the foot soldier and say “yeah but he doesn’t work here any more” problem solved. When in actual fact the individual employee is not at fault it’s management that decides when a dealer is deemed competent to be let loose on the public.

So to re-cap the video has been taken down but there are definitely issues with dealer standards at Genting Coventry. I’ve said all along that these will surely improve overtime, I think though that it needs a bit more urgency about it.

I spoke to Mark the Genting card room manager (CRM) when I bumped into him at the G Coventry on Saturday, and to be fair he knows things need to improve.

Training can only take them so far though. What they need is the right attitude to work hard and practise. These dealers should literally be taking a pack of cards home and practising on their days off if that’s what it takes to get to an acceptable level.
Winning Again!
I actually cashed in a tournament last night for the first time in a while. I posted on FB recently how bad I was playing/running and Simon Deadman put a reply on it and that gave me a bit of a boost. So when I went to play Friday I was really feeling confident. Initially things went well and I even managed to knock “Luckbox Pete” out for the first time ever. (he’s KO’d me a dozen times at least usually with a 2-outer).
As the night turned out I got a bit unlucky on 3 occasions to bust out but I felt good when I went home as I’d played pretty well throughout the night.  There were two or three hands in particular that I was very pleased with.
Because of this I went back and played the Saturday night super stack (50,000 starting stack) which I’ve never played before as I usually play in a “home game” on Saturdays.
I was like a drug crazed aggro maniac for the first hour as I saw virtually every flop. Having so many chips made me go nuts, but after a while I sort of calmed down and realised that I didn’t need to play too cleverly to beat my opponents as the field seemed quite a bit weaker than Fridays.
I won two AIPF’s with 9,9 which is pretty amazing for me as pocket 9’s is my bogey hand. Many years ago I bubbled a £1,000 event up at Walsall and a £100 re-buy (also Walsall) within a week of each other with pocket 9’s. That was nearly ten years ago and ever since it’s stuck in my mind. I rarely win a flip with them even if I spike a 9 on the flop.
After winning those two hands when we were down to about 30 players I knew I was going to go deep.

Even on the FT I felt confident. On one occasion I call a players all in button shove when I was big blind and when the cards went on their backs I was 70/30. However he flopped a flush draw and normally the villain would hit it for sure but last night I held. (thank you Gareth).

In the end although I was 2nd in chips I agreed to a 4 way chop as the blinds were 20k/40k/4k at this point.
Gala Birmingham £100 Freezeout
I would have preferred to play the £100 freezeout at the Gala in Birmingham but current bankroll restraints prevented it. It was a great success, as I knew it would be, smashing the £10,000 un-conditional guarantee.

I aim to play it next month though as work has picked up just recently. Gary Philips played it and was very unlucky to stone cold bubble it when he ran QQ into KK. He must be the unluckiest Irishman I know.

Just a word on when card rooms are run right, even though Gary bubbled he had nothing but praise for the venue, tournament and Jon Baker the CRM.
Gary said
“Very good tournament with lots of play and loads of levels. Antes didn’t come in until 500/1000 level which I like as they only slow the game early on.
I bubbled at 3.00am with qq v kk when we were hand for hand. Sigh!
Anyway I just thought I’d give you a quick bit of feedback on what I considered to be a very good tournament in a very well-run card room. It is a marathon tourney considering it started at 5.00pm but excellent value for money.
Only my second time in the place.
Special mention must go to Jon Baker! Shook my hand and commiserated with me when I bubbled and was so helpful at every stage of the tourney. Right from my initial enquiries about pre-registration to finally busting out. People like him make the whole experience worth the effort!
Next £100 at gala is on Jan 12 and i for one will be in attendance and hope it gets the support it deserves and needs to make it a regular event.
Jon Baker goes the extra mile in my opinion.”
High praise indeed from Gary but well deserved. The prize-pool made £13,500 and they also did a chop on the FT. Details below. 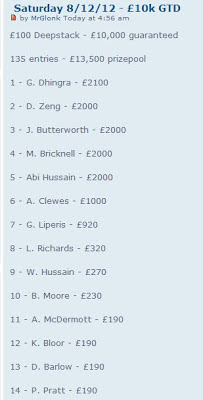 Finally
Thanks for reading, I must say I’ve had some nice comments from players recently who enjoy reading the blog. It’s a bit weird though when someone you’ve never met before says “Hi Dave” when I’m sat at the table. The guy who was CL when we did the 4 way chop told me afterwards that he reads my blog!