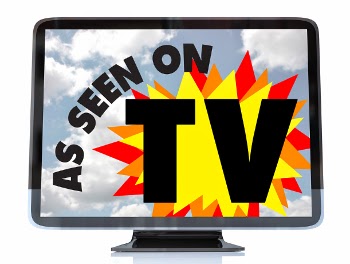 When I’m at home in the UK, it is quite rare that I sit and watch TV. Soap operas bore me to tears and at least 95% of other shows don’t appeal to me. I’ll gladly watched films, some cartoon – Phineas and Ferb is awesome – and some documentaries, but on the whole I generally don’t bother with watching tele.
One of the things that fucks me off about TV is the fact we have to pay a TV licence because the BBC refuses (or is forbidden) from showing adverts. Most adverts are about as appealing as having leaches attached to my testicles, yet here in Las Vegas I am glued to them whenever they come on the box.
The past couple of occasions that I have worked from my room at the Extended Stay I have turned the TV on for a bit of background noise. At home I listed to DI.fm, a dance music radio site, and while reporting at the World Series of Poker I hear the constant sound of chips riffling, of cheers, gasps, oohs and arrghs and the unforgettable sounds of a poker player’s dreams being shattered. While sat on my lonesome in my room, the only noise I get is that of the air conditioning unit blasting ice cold air at me from about 10 feet away.
With that in mind, I have been sticking the TV on, more so now that the World Cup is in full swing, as to keep me sane while I tap away at the keyboard of my trusty laptop. I may need to stop doing this, however, because some of the advertisements show are purely ridiculous.
You know when you get some medicine from the doctor or over-the-counter and inside it is a list of instructions like “don’t drink the entire bottle,” or a warning that a sleeping pill may cause drowsiness (I should frigging hope so) and then there’s the potential side effects. American TV adverts go to extremes.
In the UK we may see an advert for, say, Nurofen and at the bottom of the screen there will be some warning about when you shouldn’t take them. Here in the States, because companies are so afraid of being sued for the smallest of side effects, they tell you them all while the advert is airing.
For example, one today was Cialis, which is basically Viagra. If you have a Hotmail account I guarantee someone has tried to flog you a few packets of Cialis to go with your penis pump and the $200,000,000 cheque from a Nigerian prince. Anyway, it starts off with the middle aged man going on a dinner date with his wife, dances around the houses a bit about the fact he wants to get his end away, but doesn’t fancy the prospect of trying to thumb his floppy cock in after a few shandies. So far so good.
Next they pitch it to you saying you can get a free trial from your quack and shit like that, then come the potential side effects.
“If you use Cialis please be aware it can cause headaches, high blood pressure, low blood pressure with certain medicines, nose bleeds, heart palpitations, blurred vision, blindness, vomiting, rectal bleeding, a stroke, heart attack and even death.”
It then ends by warning users that if you end up with a hard-on for more than four hours then you should visit your doctor immediately.
Fuck me! Imagine getting all excited about this wonder drug, even getting a stirring in your loins and then listening to the list of shit that can happen to you. By the end of it the guy would be a nervous, limp, wreck. Never mind shagging, he’ll probably stick to playing bingo or doing the crossword.
All of the adverts for drugs or cosmetics are the same. There was another yesterday that was for some testosterone product that it warned could cause death and that if you or someone you loved had suffered from death to phone this number and to sue for compensation.
Another said that if you have it in your house, keep an eye on your pre-teenage children because if they start to develop the signs of puberty early then they’re probably scoffing your tablets without you knowing.
Yanks are nuts!
My work day was fun and went remarkably fast. Anthony Charter, one of the Canadian bloggers, came to work in an Argentina shirt so we had a bit of banter about that and on the way home I got to chat with Lane Anderson who looks after the Canadian PokerNews site, something I’d not really had chance to do before. I like learning about people, what makes them tick and what they do outside of the realms of the live reporting scene because you often find parallels with your own situation and circumstances.
I guess that’s all for now, so until next time, please be warned that reading this blog entry can cause nausea, headaches, eye strain from reading the text for too long, can cause your electricity bill to increase due to power usage of your chosen reading device, should not cause lung cancer or brain damage and if you die don’t come moaning to me.