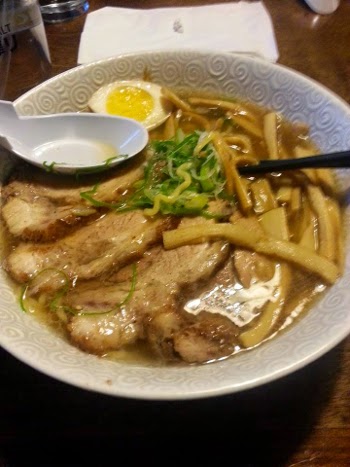 Going out for dinner has been something of a rarity for me this summer, mainly because I’ve been trying to spend as little money as possible without turning into a complete hermit / monk. Dinner time, that’s teatime for us Brits, has mainly consisted of trying to avoid food poisoning in the dealer break room or burning my mouth to bits with an Angry Whopper from the Whopper Bar.
On Day 35 I was working with Mo on a $5,000 No-Limit Hold’em event. It was Day 2 of the tournament and that meant we had a 60-minute dinner break instead of the usual 90-minutes. I hadn’t planned anything for dinner, but my friend Sam Cosby was in town and heading back home on the Friday so asked if Mo and I wanted to meet him for dinner as he was heading to his favourite Japanese ramen noodle place. Having never eaten anything Japanese I agreed to tag along, Sam picked us up from the Rio in his car and drove us to the place.
I can’t remember its name, but it was quite small inside with only enough room for around 30-40 people if they were all crammed together like sardines. Hardly understood the menu, so Sam had to tell Mo and I WTF things were. I opted for the pork dish – with extra pork – ramen noodles in a soy sauce based broth I guess you’d call it. 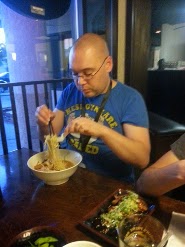 The food arrived quickly in something the size of a bucket; it was so big and deep that I had to leave some because even my guts couldn’t fit it all in. The pork fell apart it was that tender and everything tasted so nice that I was disappointed that I couldn’t finish it. Had some fun trying and failing to eat with chopsticks and reverted to basically shoving everything into my face and chewing fast to minimise spillage.
I always wondered why the Asians in the dealer break room eat fucking disgustingly with three-quarters of a chicken hanging from a fork. It’s because they don’t use knives, try and eat noodes with a pair of twigs and see how you manage.
Sam dropped us back off at the Rio where Mo and I had to work another five hours with bellies full to bursting and almost falling into a food coma.
Was good to see Sam again, even if it was only briefly. Sam I worked together on a few tournaments last summer and we got on like a house on fire, so much so that I was genuinely disappointed when I found out that he wasn’t working this year’s World Series of Poker. Maybe sometimes he’ll be in the UK or I’ll be in LA and we can have a laugh, at each other’s expense, for a bit longer.
Day 37 is another day off live reporting duties, my last until July 4, which is then my last until I return home. Looks like I will be a busy Pudding.