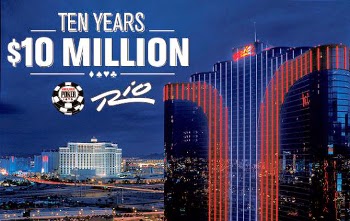 When I first started this series of blogs about my World Series of Poker trip, I said to myself that I wouldn’t combine several days together and slap them all into one blog, yet here I am doing exactly that and several days after the days in question actually took place.
Day 45 was the start of the 2014 WSOP Main Event, which meant I had to be inside the casino for around 11:30 each morning for a 12:00 pm start, report on five two-hour long levels (each with a 20-minute break after them), enjoy a 90-minute dinner break, head home, do some more work, try to chill out enough to go to sleep and repeat times three.
Day 1a of the Main Event was as nondescript as you can get when you consider the people I reported on were hoping to win the $10 million first place prize. Only 771 players chose Day 1a as their start day of choice, hardly surprising since the previous day was July 4 and most of America got pissed up and probably had several muscular injuries from giving each other high-fives and patting each other on the back for being so awesome.
The second day attracted a much more substantial crowd, but I wasn’t overly bothered thanks to being mildly poisoned by the undercooked food in the dealer break room. Before I started work I ate a couple of these burger-type bits of meat, not too dissimilar to the Grills that Dalepak make. I’d had them before on the trip and they were surprisingly tasty so was happy to see them on the menu. Wasn’t as happy to see them ejected from my arse a few hours later in a deluge of burning hot liquid.
Was heading back to the Extended Stay to make myself some food on the dinner break – I had some pasta, sauce and some sandwich stuff that needed using before heading home – and as I approached the front door of the Rio I realised that there was no way that whatever was rumbling in my bowls was going to stay put until I got home. Found a toilet that required the least piss wiping from the seat and sat doing my business. For 40-long fucking minutes. Felt like I’d been shagged up the arse by a porcupine.
Rest of that day was spent drinking water and hoping not to fart.
The final start day, Day 1c, was a half day for me and I struggled to get into the swing of things. I headed home on the dinner break and didn’t need to come back as the powers that be allowed me to finish early so that I wasn’t stuck in the casino working until 1:00am or whatever.
Made some food at the Extended Stay, caught up with a few bits and pieces, made sure that my suitcase was packed and I hadn’t left anything out that was crucial and then watched some crap on the TV.
Decided to head out and play some poker to kill some time, opting to play at the casino that the first free shuttle bus took me to. First bus came and it was the one that headed to Harrah’s, the home to my $250 win a few nights ago. Got dropped off, walked to the poker room and there wasn’t a single soul in there. FFS.
Walked around to Bally’s with the intention to heading home if the waiting list was too long. Managed to be seated within a minute of arriving then promptly lost $45 to piss me off. Maybe the Poker Gods didn’t want me to play on my final night?
Managed to turn things around over the next 90 minutes or so, selling two stacks of $5 chips to players at the table before cashing out for an addition $250 having bought in for $100 in total. Jumped in a taxi back to my room, had a couple of beers, popped a couple of the sleep aids and headed to bed knowing I was heading back home in only nine hours or so.