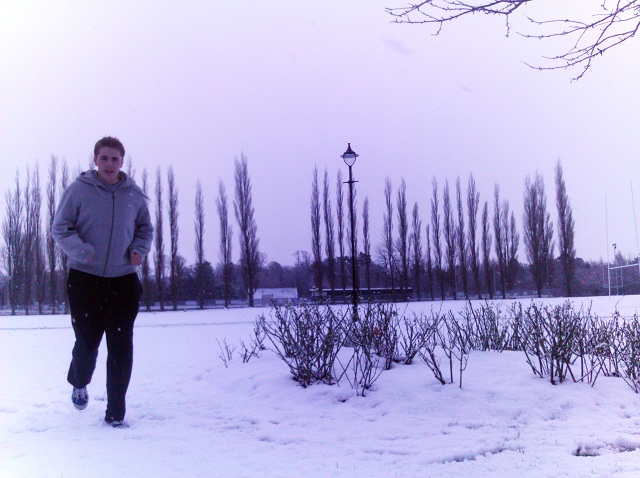 I’ve been spending most of my days recently thinking to myself:

Because I’m back in Scotland, obviously.

This is the first time I’ve been back in the UK since 2010 and the culture shock has hit me hard.

There’s many things I miss about Thailand:

Weather: In Thailand the temperature is usually 30 – 40 C during the day and about 25 C at night. Every day. There’s no cold season. When I stepped out of Edinburgh airport in shorts and T-shirts (my standard dress for the last couple of years) I got the shock of my life when I was hit with < 0 degree temperatures and a snow shower. Welcome home Dale!

Cheapness: In Bangkok a massage costs as low as £3, a meal in a clean food court starts at £0.50, a maid to clean up after me a few quid and trains and metered taxis cost pennies. When I left my condo in Bangkok my taxi to the airport (27km / 32 mins) cost £3.65. When I arrived in Edinburgh my taxi from the airport to Dalkeith (17km / 23 minutes) cost £36. I’d been back in Scotland for half an hour and was already feeling the impact in the difference in temperature and prices.

Massages: Since returning home I’ve been grinding online poker sitting in a crappy wooden chair in my parent’s kitchen. So I could really do with a massage right about now. I found a place close by but their rate was £30 / hour (plus tip expected obv). Even with an aching back I just couldn’t bring myself to pay that ludicrous price.

I guess £30/hr isn’t even that bad, but after having an amazing full body massage almost every day for the last couple of years I’m finding it difficult to accept that I need to pay 10 times as much for something that sure as hell won’t be as good, or just do without massages.

Food: Thai’s love to eat and so do I. In Thailand there are restaurants everywhere and are great value. It’s actually cheaper to eat in a restaurants than to make the same meal yourself at home. So I used to enjoy eating in restaurants every day. Back here it’s much more expensive to eat out and Scotland isn’t exactly known for it’s great food. Deep fried haggis anyone?

But it’s not all bad news, I guess. Things that I like about being home:

Weather: Ok, so this is in both categories. Bangkok is the hottest city in the world (according to The World Meteorological Organisation). I’m now finding it nice to be able to walk down the street without sweating like a pig. Although it’s ridic cold. I’ve went from one extreme to the other. A happy medium would be nice.

Language: Although most Thais in the city working in service jobs speak English reasonably well, and I did my best to learn basic Thai, there were still plenty of annoying situations where the language barrier got in the way. Not that anyone here in Scotland is able to speak English clearly mind you, but I am fluent in the local lingo so it’s all good.

Road Safety: In Thailand when you cross the road you’re taking you’re putting your life in immediate danger. God forbid you actually try driving on the roads yourself. People drive way too fast, on the wrong side of the road – or even the pavement and red traffic lights are completely ignored. Thankfully I was pretty good at Frogger as a kid so I survived.

Food: This one is in both categories again, only because I missed Greggs and Pret A Manger and there was nothing close to them in Thailand. When I landed at London Heathrow I noticed they had a Pret A Manger there and I almost missed my connection to Edinburgh because I couldn’t resist stuffing my face with several of my favourites that I’d missed so much.

And it didn’t take me long before going to Greggs in my town for a delicious Steak Bake. mmm mmmmm mmmmmmmm. 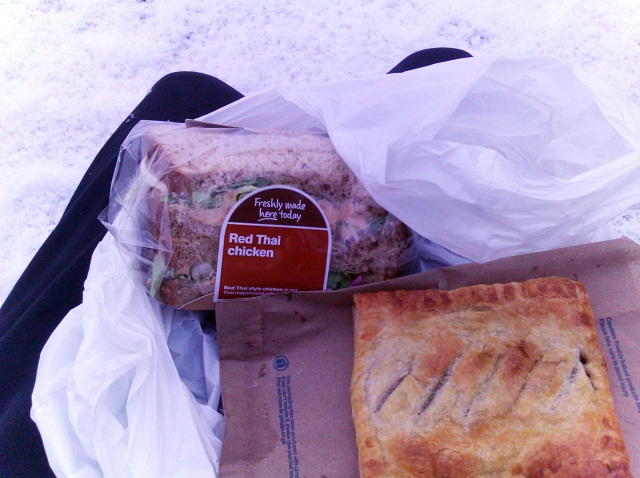 All things considered I very much miss living in Thailand and so does my pet monkey: 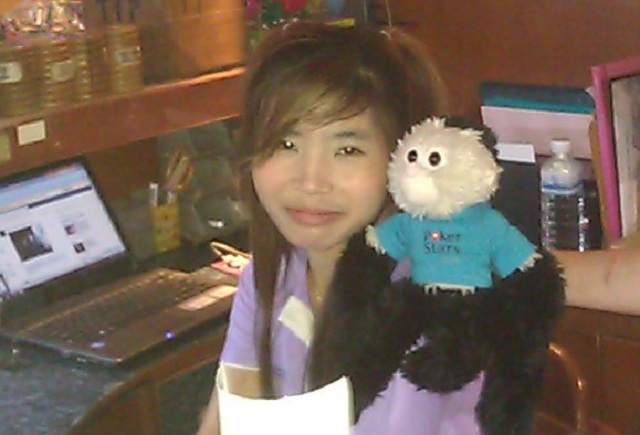 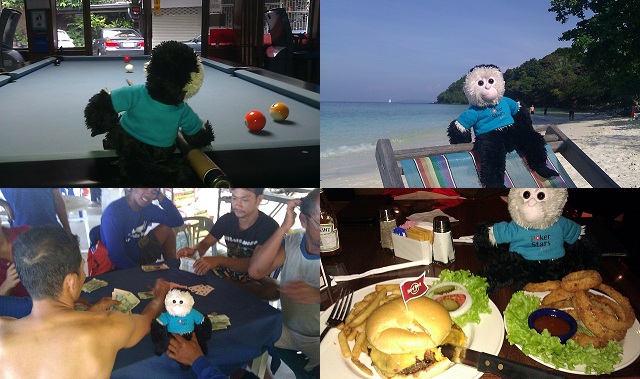 I also played TCOOP, the yearly turbo poker series on PokerStars. In the first event I played, the $82 full ring PLO, I finished in 26th place and cashed for $620 + $45 in bounties. That was pretty disappointing because I was just one 55/45 flip away from having a stack to coast into the final table where the money was huge. I played a few more TCOOPs after that but no joy with the flips means no joy in turbos.

Tomorrow I am flying to Cork, Ireland to play the next leg on the UK and Ireland Poker Tour. I plan to play the main event and the PLO event. It would be nice to finally cash in one of these UKIPTs, but if not I’ll still have fun and manage to keep smiling. 🙂

My favourite poker blog is back. PKRGSSP (Which is ‘Poker Gossip’ with no vowels…) is a site run by Jeff Walsh that I would best describe as being like daily cliff notes of poker news and gossip.

I encourage everyone to bookmark it and visit it daily. http://www.pkrgssp.com/

The Portuguese online wizard is currently doing a challenge to run $100 up into $100k by the end of the year playing MTTs. Follow him through his his blog and twitter for daily updates on his progress.