Whenever I have a live poker tournament coming up I always seem to be on some crazy nocturnal sleep pattern, never managing to adjust in time. It’s difficult to suddenly switch from going to bed at noon every day to waking up early enough to play a tourney that starts at noon.

My first ever trip to Dublin, to play in the UK and Ireland Poker Tour, was no exception. I travelled there a day early but still couldn’t adjust my sleep pattern, so by the time cards were in the air for Day 1b of the main event I’d already been awake for 12 hours. My poker day was just beginning but my body clock day was coming to an end.

I was fortunate enough to have a starting table with a good bunch of lads that I was able to have a lot of banter with, so that kept me awake. Ireland is one of my favourite places to play poker mainly because of the banter you get from the locals. Even the players who are professionals or are taking the game very seriously still like to have a laugh. It’s in stark contrast to games in other parts of the world where it’s normal for 9 or 10 people to sit round a table for hours not saying a word to each other.

I wasn’t doing too bad, considering the sleep deprivation, but then we had a dinner break. A slap up meal was definitely ill advised but feck it, I went ahead and lined my stomach anyway. When I returned to the table I was basically dead. The lad next to me kept having to nudge me when it was my turn to act. Fortunately I had a < 20bb stack and I can play that in my sleep. Which was great, because that’s what I had to do. 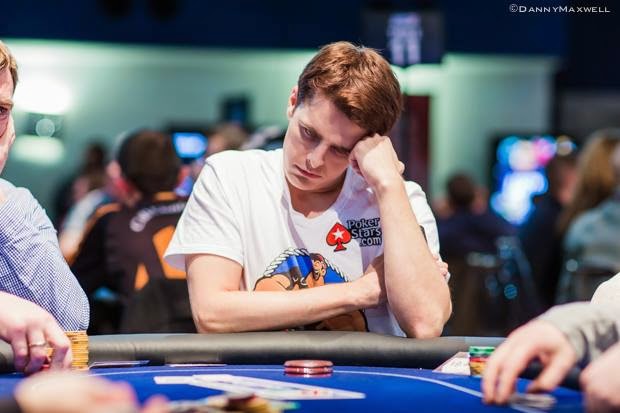 During the the last level of the day I shipped it in over a raise with AK, flipped like a pro and got the double up I needed. I ended the day with 26,800 in chips, slept for 12 hours and woke up at a reasonable time before the start of Day 2. So a very decent result, all things considered.

At every PokerStars event there’s a bag of goodies given out to PokerStars qualifiers, which represents some nice added value. The Dublin bag was one of my favourites because they went for quality over quantity. 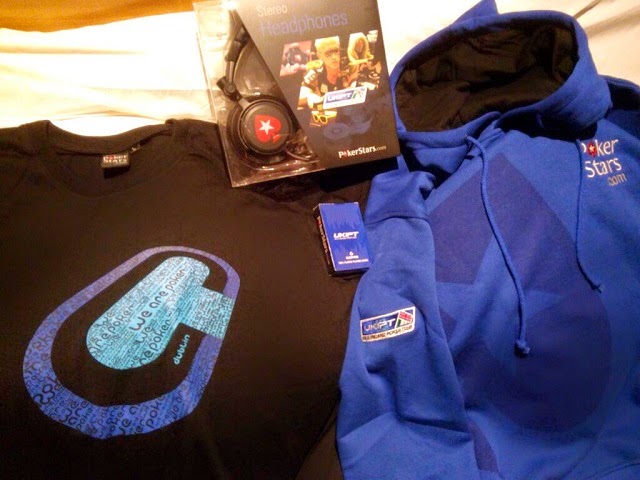 Included was a T-shirt, a very high quality soft hoodie, official UKIPT playing cards made by Copag and PokerStars headphones. Decent swag! I tweeted out that photo at the time and had a few dozen people begging me for the headphones. Apparently there’s no way to buy them, even in the VIP Store, so if you want some you’re going to have to come play a UKIPT.

With a good night’s sleep behind me (I always sleep better when I’ve paid less than half price for my hotel room), I continued my excellent preparation for Day 2 by eating a full Irish breakfast from the hotel buffet. 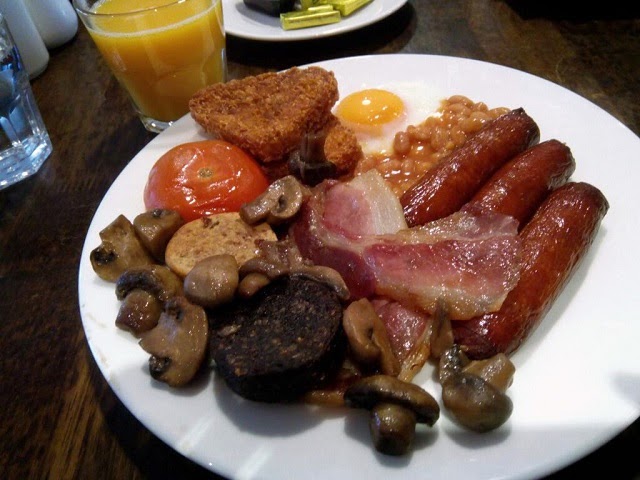 The day didn’t last long though. In the first level Entim open-raised from button and I shoved 24bb from the small blind with 97s. He called with 88 and I didn’t get there, so gg me. I remember tweeting my bustout hand and getting a lot of stick from random people but I’m happy with my play. I’ve studied that exact situation with an ICM push-fold calculator many times, so I was confident that it was a good move. It would be really hard to put a good opponent on open-raising and calling ranges that make it a -ev shove.

So suddenly I had a lot of free time on my hands. Free time to do stupid stuff like the Viking Splash Tour.

The tour involves getting driven around Dublin and floating around the canal docks in a DUKW. A type of vehicle that was built during World War II as amphibious trucks to carry soldiers and equipment to aid the war effort. They now carry a bunch of eejit tourists wearing daft Viking helmets. 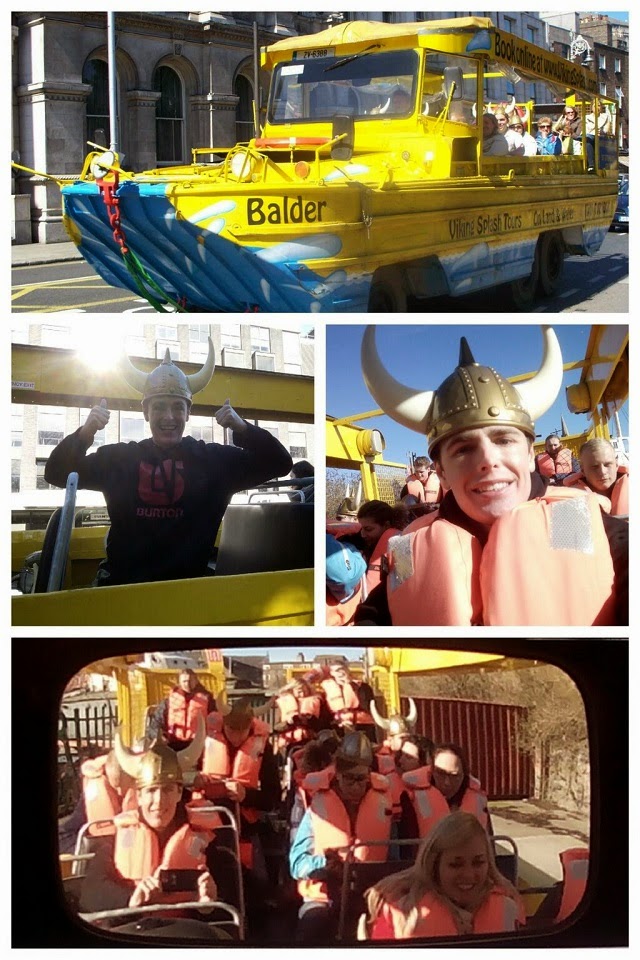 Unsurprisingly I couldn’t get any other poker players to join me but I’ve never let that stop me from having fun when I travel.

The tour was a good laugh with the driver / tour guide giving us a humorous commentary of Dublin’s sights and landmarks in a thick Irish accent. We were also strongly encouraged to scare pedestrians with loud Viking roars as we passed them. Way more fun than you’re average city tour.

With every PokerStars tour event there’s a players party, representing more extra value since the drinks are free. On the down side it’s always a complete sausagefest. There are some girls there, usually just other poker player’s girlfriends or staff, but they are worth finding so that you don’t have to stand listening to some hairy bloke’s drunken bad stories.

The Dublin party was held at Cafe en Seine, right across the street from the poker venue. It’s a trendy place with a 3-storey atrium, art nouveau decor, glass panel ceilings, 40 ft trees and a whole bunch of other fancy stuff. Very nice, but if the free bar was in a disused warehouse 10 miles away I’m sure 90% of the degenerates who attended would still have turned up to get hammered on the PokerStars tab.

As for myself, well I’m still on the wagon. The parties are still fun, at least until the point where everyone is so drunk that they become obnoxious. So it was an 11pm early night for me.

One of the best things about being a sober Scotsman is waking up at 7am the morning after a party and feeling fantastic.

One of the best thing about travelling is making new and awesome friends.

Early in the morning after the players party I made a new, awesome and extremely cute Korean friend who I asked to join me for some Irish breakfast. We both have a great interest in travel and food so we had a lot to talk about as we stuffed our faces with our deliciously greasy food. 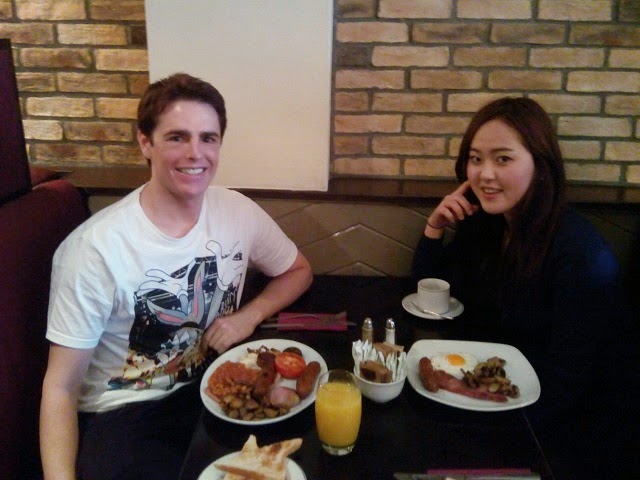 And again the next day, as we stuffed our faces with delicious Japanese food. A cute Korean girl and a Scottish fat bastard eating Japanese food in an Irish city, now that’s multiculturalism. 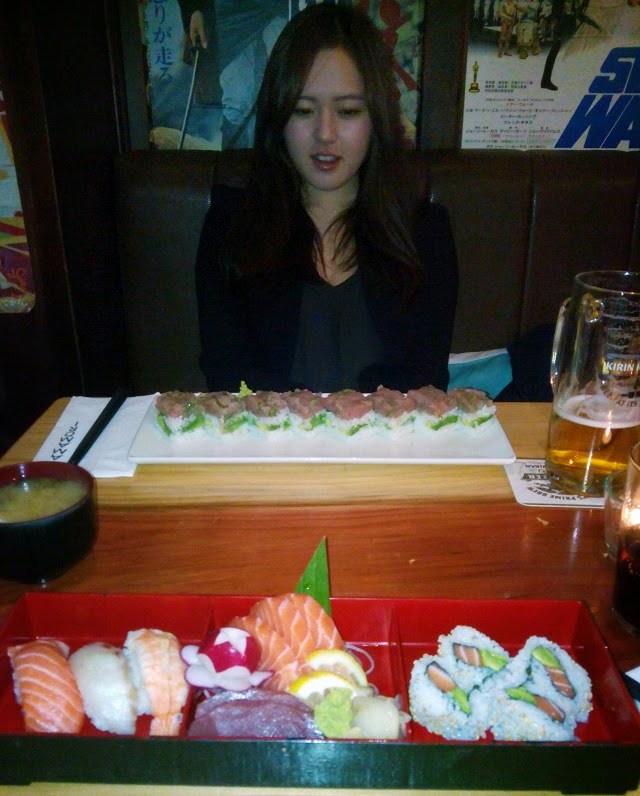 I usually don’t play the side events, preferring to play only the main event and use any remaining time to do some sightseeing or fun activities in the city that I’ve travelled to. However the weather was Irish and my new friend was working so I jumped into the PLO event. The O standing for the number of hands that I won in the tourney. I had to GTF-O pretty quickly.

The silver lining was that I had busted it early enough that I was able to buy into the final event, the EPT Structure Deep Stack Hyper Turbo. A ‚¬165 event where the buyin is low but the stacks are deep, at least for a couple of hours before the madness begins.

I played pretty loose, 3-betting every hand that I wanted to play when I had position on the open-raiser. And I wanted to play a lot of hands. What happens in the early levels isn’t that meaningful though because soon we all have push/fold stacks.

A bloke minraised from the cutoff and I shoved 11bb with pocket 5s from the small blind. He snapped me off with A7o and I lost the flip. #coolstorybro. Whatevs. Another tourney bricked. Add it to the list.

In almost all my tourney bustout hands where I lost a flip, I’ve been the one doing the shoving, not the calling. I think that’s important, or at least it would be if anyone ever folded to me, which they don’t, so it’s not that important after all.

* Dreich (Old Scots origin) – A combination of dull, overcast, drizzly, cold, misty and miserable weather. At least 4 of the above adjectives must apply before the weather is truly dreich. (From UrbanDictionary.com)

My favourite one was the Natural History Museum, which I knew about from passing it on the Viking Tour. The bloke referred to it as “The Dead Zoo”, and that’s exactly what it is, a huge area filled with dead animals that have been stuffed and preserved. Their collection of animals and how they are displayed has barely changed in the last 100 years. Fun place to check out on a dreich day and free is my favourite price. 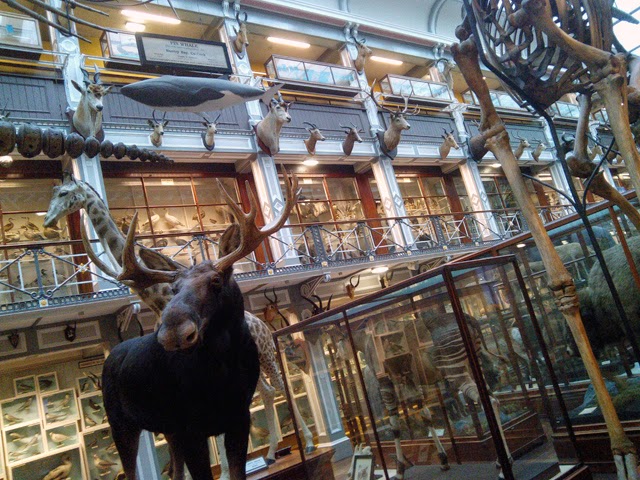 I usually book my flight home for the day of the main event final table. That’s because there’s never any other tournaments scheduled for that day, and in the extremely unlikely event that I do manage to luckbox my way to the final table it won’t be too big a deal having to pay for another flight the next day.

I must have been feeling really confident, or more likely made a mistake, way back when I booked my Dublin flights. My flight home wasn’t until after the final table.

Max Silver, who had won UKIPT Dublin once before, made the final table with a massive chiplead so I went to rail him, all the way until he was heads-up.

At that point I received a message on my phone from my cute Korean friend, inviting me to come to the buffet restaurant where she works for some free cake. “Free cake you say? Well fuck railing this donkament, I’m off……” 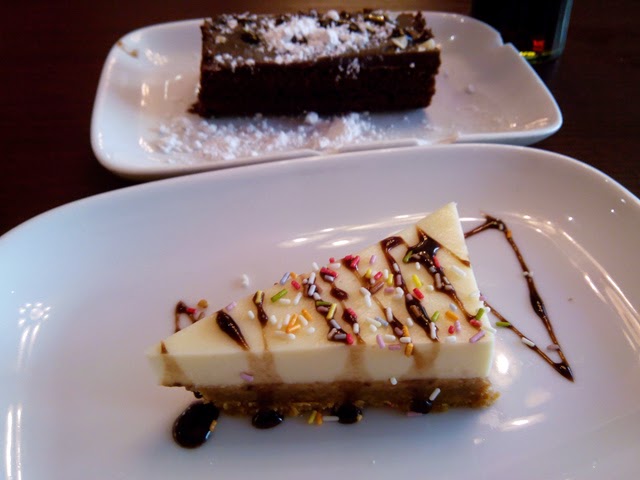 I ended my first ever trip to Dublin on a sugary high and I still don’t know who ended up winning that tourney.