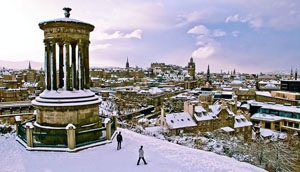 Some people may call me crazy for leaving the beautiful January weather in Thailand to fly long haul to Scotland where my memories of Januaries past include;

7 hours of daylight on a clear day.
Hail stones the size of golf balls.
Hibernation.
Defrosting the morning milk delivery before using it on my cereal.
Many, many, many delayed flights.
Many, many, many, many traffic jams.
Scraping ice from the car wind-shield, only to realise that the engine won’t start.
Absurdly large heating bills.

And just a whole load of temperature-related issues.

So I’d need a pretty good reason to get on that flight. The best reason I can give is that UKIPT Edinburgh begins in a few days, the only PokerStars event held in Scotland. As Scotland’s only Team PokerStars player, I should probably go play it!

The flight costs way more than the main event buyin, but that’s OK. If enough locals play then I will still be massively +EV over all :-). Hopefully the Scottish punters still play the…. unconventional style of poker that I fondly remember.

The event is being held at one of Edinburgh’s best, and therefore most expensive hotels, The Balmoral. However, this thrifty Scotsman won’t be staying at the hotel. Rather than shell out for the lol £200 per night bill I will be commuting from the blow-up bed in my brother’s room of my parent’s house in the second-worst area in Dalkeith via the [   ] luxury of Lothian Buses each day.

Oh the glamour. I await the joy of sitting next to neds (Scots word for chav / obnoxious scumbag youths) and smelly tramps while stopping every 100 meters on the 12km journey.

Paul McTaggart had this to say when I told him about my bus plans: 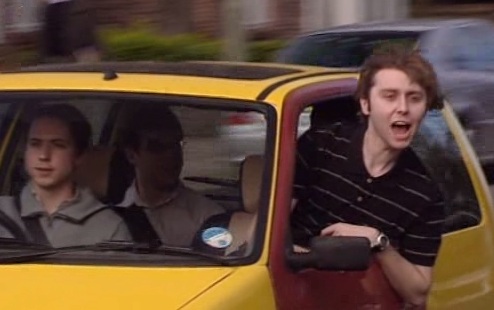 UKIPT Edinburgh is a cashless event, meaning that you have to sign up through the PokerStars client. No cash buyins are accepted on the day. This does have the advantage of being able to see who is registered for each tournament / day:

I just hope to outlast DaWarsaw (Grzegorz Mikielewicz), the only other Team Online player in the event. We don’t have a last longer bet or anything (although judging by his past prop betting results we probably should), it’s just that I can’t have this guy travelling from Poland and showing me up on my home turf.

I’m playing Day 1A. It will be my first time playing live poker in 15 months, which is the longest I’ve ever gone without playing live since I played my fist hand of poker. If I enjoy it I will play more in the future, but I’ve become accustomed to multi-tabling Hyper Turbo 6-Max SNGs and Zoom 6-Max PLO online, so there’s more than a slight chance that I’ll find live full ring Hold’em a little boring.

If you’re at my table and are a bit slow then be prepared for me instantly calling the clock on you every hand. Just saying. 🙂

Whenever I receive coins in my change I just take them out my pocket when I get home. I really don’t like carrying it around with me. So after 2 years in Thailand I had a whole bag full of smash. 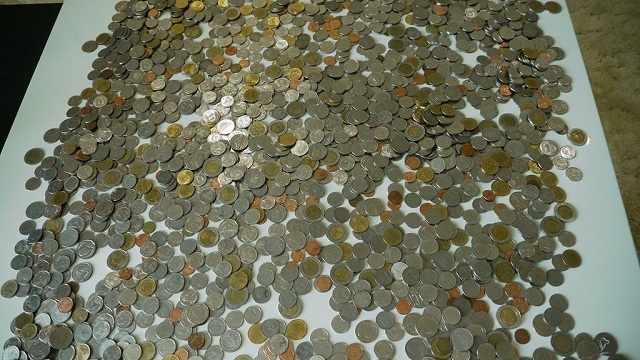 In the UK I used to do the same thing and every couple of years I’d just take it to the supermarket where they have a Coinstar machine. With Coinstar you just need to dump that smash into a funnel at the machine and it counts it all for you in a couple of minutes and gives you a receipt that you can trade in for cash or have discounted from your shopping. Easy game. As Coinstar seem to have a monopoly on these machines there is a high rake of 8.9% but it’s still worth paying for the convenience.

Obviously Thailand doesn’t have this technology so I decided to take that bag of smash to the bank.

When I first came to Thailand I would sweat like crazy everywhere I went, but not so much any more. I thought I had just become acclimatised to the insanely hot weather. But when I was walking while carrying that heavy bag of smash I was sweating like a rapist. So I guess the real reason for being less sweaty these days is that I weigh much less than I used to.

At the first bank I went to I dumped the bag of smash on the table and they asked me if I had an account with them. I didn’t, so I was told to GTFO.

The second bank wanted to charge me a 10% fee and they wanted me to separate the coins into different denominations in separate bags. So I told them to GTFO.

The third bank I went to (Kasikorn, the one with the green sign that gives a bank account to anyone with a tourist visa lol) only wanted to charge a 1% fee but still they wanted me to sort the coins into denominations and something else that I couldn’t fully understand, like putting them in bags of 100 each or something like that. They kept trying to explain it to me in broken English and I kept failing to understand, so after some frustration the bank teller talked to someone out of sight and then told me “OK, no problem, she will help you”.

Who will help me? The bloody cleaning lady of course. She didn’t look too happy about it either. She took up practically the whole counter where people fill out deposit slips and stuff to start sorting and counting my smash. Meanwhile, I just stood and watched. It wasn’t that I didn’t want to help, I just didn’t know exactly what she was doing and she didn’t speak any English.

The bank started to get really busy and customers were getting really pissed off about me, the cleaning lady and the smash being right in their way. I think back to all those times when I was behind someone in a supermarket queue who wanted to pay for their shopping with a load of coins, and how annoyed that I would get. Well this was the ultimate payback for all those times, and as we know – payback’s a bitch!

I got a lot of angry looks from customers and a lot of curious looks like they must have been thinking to themselves “Why farang have many coin? Beggar? Busker? I confuse” and “Why cleaning lady count coin?”.

The cleaning lady was making tough work out of the coin counting as she had very fat hands. She would try to slide coins across the table into separate piles but her big fingers kept grabbing hold of more than she intended. She would also frequently lose count and have to count whole piles of coins over again. It was tough to watch.

After 30 minutes she seemed to have worked out a method and was getting into a good rhythm when they sent one of the bank tellers to help her, as the bank was about to close in another 15 minutes. There is a well known proverb ‘too many cooks spoil the broth’, that if too many people try to take charge at a task, the end product will be ruined. This extra pair of hands buggered up the broth good and proper.

The bank ended up closing but we had a lock-in as it took them another 30 minutes to finish the counting and bagging. They seemed less than happy about doing overtime in order to count a farang’s smash.

The final count came to 4,620 Baht (That’s £94.50 GBP / $152.50 USD). The two women looked exhausted after that so when I said “No, this only half, have more coins here in my backpack”, their jaws hit the floor faster than the coins they had been spilling. I was of course only joking, not that they seen the funny side mind you.

As I walked out the manager had a word with me “Mister, next time you count at home yourself, we don’t do this again.” Fair play to them. They went beyond the call of duty to help a customer. Great customer service. Pity I’m not one of their customer though.

Last Sunday night with practically all Team PokerStars members ballin’ it up in the Bahamas at the PCA I was left to fly the PokerStars flag online.

I did look into flying to the Bahamas but the best flights from Thailand would cost $4,541, have 3 stops and take 41 hours. Two days of travel torture and an empty wallet didn’t seem worth it for me to leave one sunny paradise for another. (The massages are a hell of a lot better and cheaper here as well).

My first duty of the night was to play in the Team Online Freerolls where the pros have a bounty on their head. As I was the only pro playing I had everyone gunning for me. Not just the players at my table but players on other tables who were railing and sweating that they’d get moved to the same table as me for a chance at the bounty.

Obviously I crashed out of both tourneys being bad beat but all you can do in that scenario is wait for a big hand and get the money in good. The bounty is huge in relation to the prizepool so if they have me covered then getting it in preflop with 20% equity versus me is usually +EV for them.

I also played the previous week’s Tournament Leaderboard champion, ‘132111‘ from Denmark, heads up. Each weekly TLB champ gets the chance to play heads up vs a pro for $1,000. If they lose then the money gets rolled over to the next week.

I was unable to win anything in the match but I was playing for pride. So when I prematurely spunked off my stack in the second minute and fourth hand of the match I wasn’t feeling terribly proud of myself. I flopped the nut flush draw and an ace overcard against his top pair with weak kicker. All the money went in after I 5-bet shoved on the flop and he snap called. 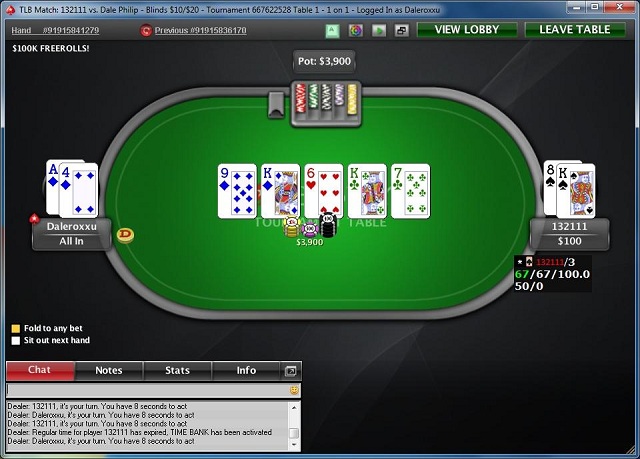 Later on Sunday I was the host of the Sunday Million final table. As I railed the last few tables there was a guy called ‘Smasherxx67‘ playing every hand and running like god. I watched him call from the blinds against Moorman1’s open raise with 95o and the flop came 559. The observer rail chat was going crazy, only to be silenced by the start of the final table where only the players can chat.

The hot streak for Smasherxx67 just didn’t end. He laughed at the suggestion of a deal and went on to clean up the final table in just over 30 minutes. I’m used to Sunday Million final tables taking 2.5 – 3.5 hours. So this early climax was incredible to witness.