Usually when I write a trip report from a poker tournament I talk as much about all the cool stuff I did in that city while I was there as I do poker. Well in Edinburgh I didn’t do any of that touristy stuff like visiting the castle or go on a ‘ghost walk’ because Edinburgh is my home city.

Having been overseas since 2010 it was a bit of a culture shock coming back home, especially in the middle of winter. I flew in overnight from Bangkok, Thailand just a day before the PokerStars UKIPT Edinburgh festival kicked off.

Being the tight-fisted thrifty Scotsman that I am, I decided to pass on a £200/night hotel room at the luxurious Balmoral Hotel where the event was being held and instead chose to commute from my parent’s house in Dalkeith, about 12km away, using public transport. I hadn’t used the bus in years and badly misjudged how long the journey would take. I ended up getting to my seat in the Main Event about a half hour late. Which was fine, as they give you a full starting stack when you sit down, no blinding off. And with 300 big blind starting stacks I find it hard not to spew off my chips in the early levels anyway.

My starting table was friendly with a good mix of playing styles and abilities. The people sitting around me recognized me when I sat down and told me that they read my blog and follow me on twitter. That was nice but kind of strange at the same time, thinking that these guys must know a lot about me but I didn’t know anything about them.

This was my first time playing a hand of live poker in 15 months. I’d been put off from playing live for a long time due to previous negative experiences. Not just bad results but many incidents where people have slowrolled me, laughed in my face after putting a bad beat on me or been otherwise obnoxious to the point of making the game painful to play in rather than fun.

Thankfully at this event my tablemates had good etiquette and were happy to chat it up and have some banter. It was a fun game, despite the fact that I was only getting dealt a fraction of the hands per hour compared to playing online.

I tried playing a bit loose to begin with but missed every flop and they kept playing back at me. So I went back into my shell for a bit until I found a real starting hand. I picked up AKs and made my first 4-bet with it out of position. Sadly I had to fold on the turn to aggression when I had only ace high, sigh.

I think the only post-flop pot I won in my first hour of play was when both my Geordie opponent and I had QQ and chopped up the blinds.

Thankfully in the last hand before the first break I got all my chips back in a 3-bet 3-way pot where I flopped a flush draw then turned a straight draw and shoved my stack in over the aggressor’s turn lead. I was getting sick odds to just call his bet but his bet was pretty small in relation to the size of the pot and he seemed genuinely uneasy about his hand, that I thought was likely an overpair, so I just shoved it in. He tanked for 5 minutes into the break before letting it go. Whew. 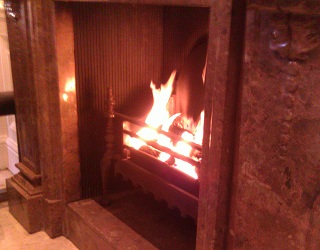 Since I was running fairly cold at my table I spent the first break sitting in-front of an open fire in the Balmoral lobby, hoping that it would inspire me to run hot.

I was still around starting stack coming up to the second break when I got into yet another hand that lasted several minutes into the break. I had QQ in the SB and open-raised. Flop T98 with two spades, I lead – he calls. Turn 8, I lead – he calls. River 7 of spades. I check – he bets < half pot – I make the easiest fold ever. I thought I’d been rivered but he showed me T8 for a flopped 2-pair and turned boat.

I struggled for a while and was down to less than half my starting stack with 20 BBs. A good player open-raised from the CO and I shoved it in with A7o from the BB. He snapped called with AA, Oh dear. The flop was a whole load of nothing and I was half way out the door when the turn gave me a draw to a gutshot. “You can hit an 8” he said, followed by “and there it is”. A sick runner-runner straight. I just humbly sat down and stacked my chips.

In the next break I met up with Nick Wright who is one of the talented bloggers at PokerStarsBlog.com 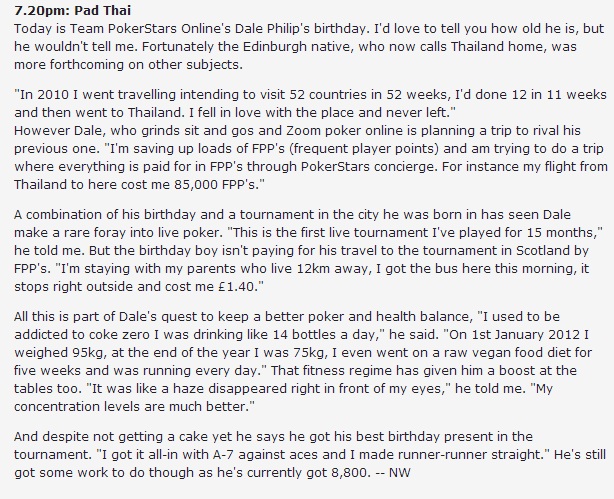 I was hoping that doing that interview would bring me more luck. You know how on the TwoPlusTwo Pokercast they have their “Pokercast Karma” where every guest they have on the show ends then goes on a sick winning streak?

Well apparently the equivalent over at PokerStarsBlog.com is the “Bloggers Curse”. Minutes later I got my stack in with QQ preflop and lots to JJ. GG.

So that was that. I couldn’t feel bad about losing in that manner after sucking out on AA.

Despite playing for a whole day and not making any money I still had fun and left with a smile on my face, which is something I never thought I’d say. All the staff did a great job, with everything going smoothly. All the players I played with were respectful and friendly and PokerStars couldn’t have held the event at a better venue.

I didn’t play any more events. I had intended to play at least the PLO side event but I was struggling with jetlag and the weather was freezing cold so I ended up just playing TCOOP events from home. I did manage to drag myself out of bed and into the freezing cold city to attend the Players Party though!

All main event players (and a guest each) were invited to the Players Party at Opal Lounge, an upmarket nightclub in Edinburgh. It started at 9pm and as I’ve been to plenty of these parties in the past I know that the tab usually runs out after about 2 hours.

Given that this one was in Scotland, where people are known to like a drink, we got there pretty early so as not to miss out on the free drink.

I went to the party with my brother and we planned to meet Grzegorz Mikielewicz aka DaWarsaw from Team Online there. However we were on our 8th drink each by the time he arrived. He made the rookie mistake of turning up fashionably late to a party with a limited free bar tab and only got in one bottle of beer before the tab was closed.

DaWarsaw is a good guy and we had fun chatting with him. A bunch of Polish poker players recognized him and we partied with them in the VIP section.

The player parties at PokerStars events are always excellent. Everyone gets to eat, drink and socialise in a luxurious setting, so even if, like me, you bust the Main Event out of the money – you still leave with a smile on your face.