After my summer trip around Europe I had a few days rest back home in Scotland before I found myself on yet another aeroplane. I was headed to Galway, Ireland to play the UK and Ireland Poker Tour.

It used to be so easy to travel to Galway. It was less than an hour direct flight and then 5 minutes by taxi into the city centre. That was before some eejits made the eejit decision of closing down the airport a couple of years ago. The best alternative was to fly to Knock airport then wait around, then take a 90 minute bus. Pretty much trebling the usual journey time.

I travelled with Scottish poker lass Kellyann Heffernan, who thought it would be a good idea to get into an extremely heated debate with me about religion, on a bus packed with people, in Ireland, a really religious country. She believes in god (I didn’t ask which one), souls, ghosts, astrology, fate and all that utter nonsense, while I’m a “big bad atheist”.

I tried to end the argument/debate before it even got started. Even respectfully agreeing to disagree but she just wouldn’t let it go so what was I supposed to do? As I gave completely rational reasons as to why everything she believes is absurdly ridiculous I could hear people gasping. Old couples were looking at me and shaking their heads and parents were covering their children’s ears. I haven’t felt that unpopular since I dropped someone’s baby at a family gathering. Another situation that I didn’t even want to be in in the first place!

The UKIPT in Galway was quite a bit different from previous UKIPT events. It was a 17 day festival rather than the usual 5 days and Full Tilt rather than PokerStars was the title sponsor of the event. They built a massive marquee tent to host it that they called “The Full Tilt Poker Village“. 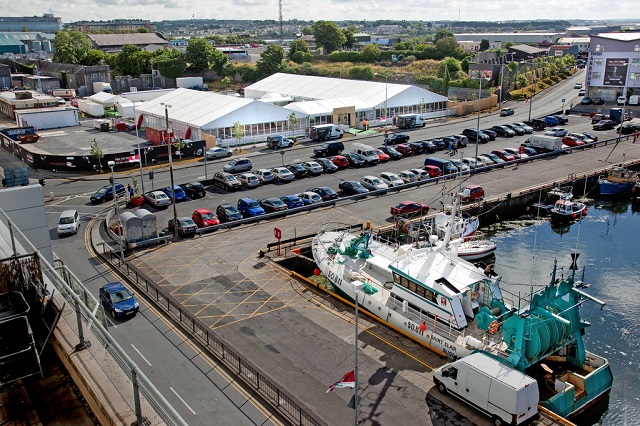 The village was pretty cool, one of the big tents was a bar and chillout room with sofas, bean bags, pool tables and free to play arcade machines (Bomb Jack was my game of choice). The other, bigger tent held something like 60 poker tables for the tournaments and cash games. Very impressive.

There were 60 events taking place throughout the festival but I just came to play the main event, flying in the day before day 1b. There was a ‚¬1,000,000 guarantee on the main event and thankfully only 860 players registered meaning a nice ‚¬140,000 overlay. That’s some great value for everyone who did play. Everyone who cashed got over 16% extra euros than they would have if there was no guarantee. 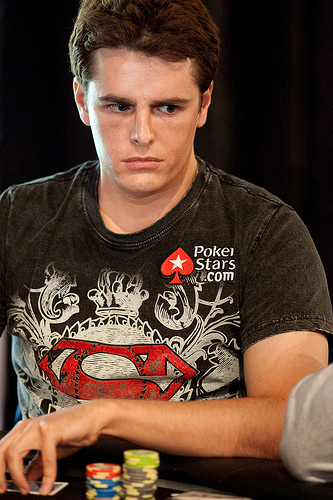 Just like the last tournament I played in I got a terrible table draw. Only this time it wasn’t that I was playing against 9 other pros, it was because I got the nut low seat location in the whole venue. I was sat at the table and in the seat closest to the entrance door. So I had people brushing past me all day long.

I got off to my usual rubbish start, losing a few ridiculous pots, but my worst bad beat of the afternoon was when someone inconsiderate clown stormed past the table, knocking over my glass of Red Bull, spilling it everywhere. They didn’t even stop to apologise or anything, and were so fast I couldn’t see who it was. Very tilting.

In the middle of the day I busted two of the toughest players at my table with AKo > JJ and KK > QQ and was up to 80k from the 20k starting stack. One of the players was replaced by local legend Liam Flood who has been involved with poker and gambling since forever. He came to the table playing a somewhat unconventional style. His standard open raise size was 3.2BBs and he bet full pot on the flop each time.

The one hand I remember playing with him he 3.2x raised from early position and I flatted JTo on the button. The flop came 9 high with two hearts and he bet full pot. I floated. Turn was A of hearts, he checked pretty quickly and I bet between 1/3 and 1/2 pot. He thought about it for ages and then eventually folded. Later he told me that he should have called me in that hand, so I wonder what he laid down.

For the tenth and last level of the day I got moved to a new table, with Padraig Parkinson on my left and Keith The Camel on my right. It seemed like a fun table but before I could think of a “An Irishman, an Englishman and Scotsman sit down at a poker table….” joke the day had ended, and I bagged up 83k for day 2.

I got off to an absolutely flying start. Everything just seemed to go right. Every time I raised and got called I took down the pot post-flop. Every time I 3-bet or 4-bet bluffed I got them to fold. Then I picked up a real hand, KK and got it in for 5 bets preflop vs AKo for a double up.

One orbit later I picked up the KK again. I minraised from UTG+1 and Liam Flood put in a 3x 3-bet from middle position. I 4-bet him back pretty small for about 1/4 his stack and he shoved quickly. He turned over 55 and I held, putting me up to 300k and the chip leader for tournament, from the 83k I started the day with less than 2 hours earlier. Poker is fun when you’re running hot.

Our table was then moved to become the TV feature table for the rest of the day. That was fun, being able to tweet out a link to the live stream so that my friends could watch me play.

On the break I saw Jake Cody doing an interview with PokerNews and I got him with the best “interview bomb” ever. He was talking about how some guy in a blue t-shirt bluffed him in a massive pot, then I walked past the camera wearing a blue t-shirt and sticking my tongue out.

After the break I had two tough players moved to my direct left, Alan Gold and Jack Salter, who made my life a nightmare. I didn’t get much going at that table and I ended the day on 293,000 to take into day 3, slightly less than I had 6 levels before.

Straight after Day 2 ended the players party began. I chose to remain sober, as I have been for the whole of August so far and plan to be for the foreseeable future. This was hard to do when there was a free bar as we all know that a Scotsman doesn’t often pass up on value.

My fellow Scotsmen there were certainly having more than their fair share of the alcohol to compensate. A wasted Kyle Maguire dragged over a woman thrice his age right in front of where I was standing and started dancing with vigorously dry-humping her against one of the sofas. Oh deary me.

This was also the first time that I met Dave ‘The Devilfish’ Ulliott. I was lying on the beanbags drinking Red Bull with Kellyann when he swaggered up to us and asked us to start making out with each other so that he could film it on his camera. What a guy. 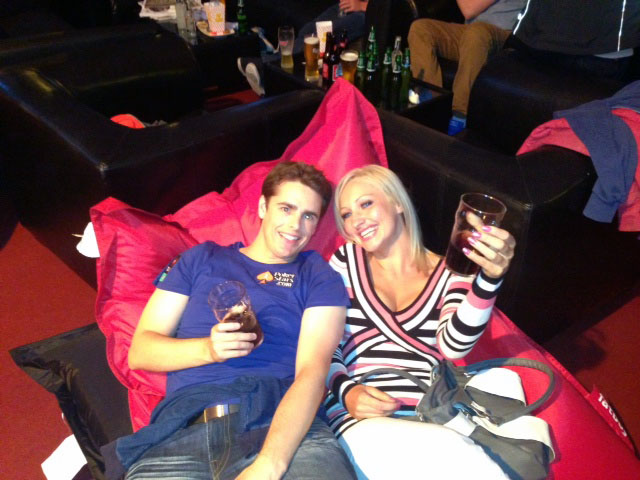 The highlight of the party for me was the massive chocolate fondue fountain with all sorts of treats, and fresh popcorn and candyfloss. A sugary treat. 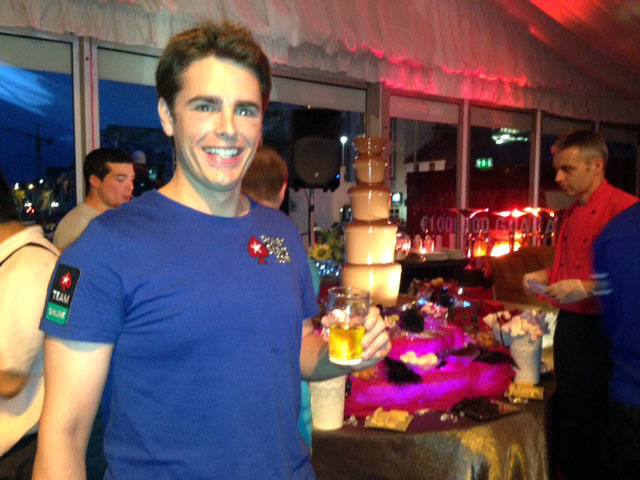 I had an early night, heading at 2am (that’s early right?) due to still being in the main event. I just couldn’t sleep though as I felt really, really rough. That always happens to me when I play live poker, I can’t go more than a couple of days without getting ill. I think I’ll need to start playing in a surgical mask or something to fade all the germs from all the dirty men that play poker.

I went into Day 3 feeling like an absolute wreck but I still hoped that it would be a long day for me. We started the day with only 51 players remaining and I had stack of 29BBs, slightly below the average of 32BBs.

I took a hit in the first orbit when I minraised 22 and the only player that I couldn’t fold to his shove, shoved for 8.5BBs. So I called and he had 88 and that was a 1/3 of my stack gone.

Shortly after, I was in the big blind with a 19BB stack. It was folded to Jack Salter on the button who of course raised, so I shoved all in with T9o figuring it to be a profitable move against his opening and calling ranges. He looked really unhappy about it and was thinking about it for ages so I figured he must have something like a weak ace. Eventually, after quite possibly making a good live read on me, or mistaking me looking ill as looking like I was bluffing, either way, he made a good call with A6s. Two pair for me on the flop though, happy days.

Our table broke after an hour. In the second orbit I was sitting with 40BBs in the BB when a lad open shoved from the button for 15BBs. I looked down at ATs and called. He showed KJo and I was looking good until the dirty jack appeared on the river. So that was the difference between me having 57BBs and having 25BBs.

Nothing much went right after that. Then a level later I was in the BB again, this time with only a 15BB stack when it was folded round to the SB who had a big stack and instantly shoved all in. I looked down at an Ace and knew that I was calling, then I seen a 4, and thought twice, but only for a couple of seconds, although I guess it’s kind of a close spot, but I called. He turned over AA, wow, and I did something I’ve never done before, got up and put my jacket on before the flop was even dealt. The flop came 3 hearts and the turn was a 4th heart making him the nut flush, not even a sweat for me.

I finished in 30th place for ‚¬4,850 and was pretty gutted. The ‚¬200,000 first prize would have been much nicer. But thankfully two of my fellow Scotsmen and really nice guys, Alan Gold and Paul Febers got heads up and chopped it.

I did a post-bustout interview with the lovely Laura Cornelius from Poker News, that turned out to be pretty funny.

Since I didn’t make the final table as planned, I had a spare day in Ireland. This was my fourth trip to Ireland and I’d yet to do anything that wasn’t poker related. I woke up, the weather was fantastic, so I decided to do a full day tour with a trip down some old cave, lunch in a small village pub and the highlight being a couple of hours at the Cliffs of Moher.

What an amazing place. The pictures speak for themselves.

It was a fun time in Ireland. I hope the UKIPT Galway as a 17 day festival becomes a yearly thing. I would definitely try to go earlier next time and play in loads of side events. Everyone that I spoke to who had been there for the duration had nothing but good things to say about the event.