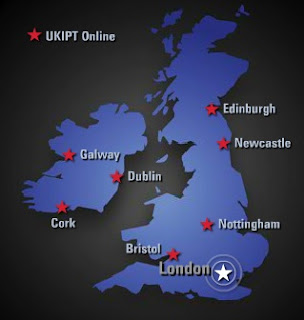 London was the final stop of the UKIPT season. It was only my third event though and I felt like I’m just getting started. That’s what I get for being AWOL in Asia the last couple of years I guess.

After a disappointing Day 1 bust out in Edinburgh and small cash in Cork, I went to London hoping to improve on those results and take a shot at the £150,000 first place prize.

Main Event Day 1
I only managed to sleep for a few hours the night before so I wasn’t happy to learn that we’d be playing for 11 levels. Including breaks that meant that the day, beginning at midday, would end around 1am. Tough grind.
I missed the first 15 minutes of play because I had to queue up to get the new PS Live card that’s now required for entry into live PokerStars events. They gave me fair warning about this with an email telling me to turn up early. Early isn’t my style though.
My starting table was comprised of 6 young Scandy-looking kids and 2 older blokes. Everyone was pretty competent with no obvious fish. You know what they say? If you can’t spot then sucker at the table then…….. *gulp*…. oh dear!
For the first 4 levels I was ridiculously card dead. I’m learning how not to spew off chips when I have 300BBs and that includes just nitting it up when I’m getting dealt junk hands. I nittied it up so hard that my opponents began to comment on my nittiness. That was a good thing, because as soon as the antes kicked in I used that image to my advantage.
While I was playing I received a tweet from Mat Frankland, who I knew from online but had never met in person before. He was playing in the same room and I tweeted back asking him to come over to my table and say hi. 30 minutes later he walked up to my table and said hi. Then I noticed that he was carrying a rack of chips, which he put on the table then sat himself in the empty seat opposite me. Oh dear.
As if the table wasn’t tough enough. I should be more specific when I make my wishes.
Bear in mind that there were about 50 tables, so pretty much a one-outter.
At the dinner break at the end of level 6 I had a stack of 23k from the 15k starting stack without having invested more than 3k in any single pot. I was still absurdly card dead but with larger blinds and the introduction of an ante I was finding spots to gain chips.
During the previous level I could hear a lot of screaming, laughing and shouting in Scottish accents from the bar about 30 meters away. I was pretty sure I knew who’s loud-mouthed voices those belonged to so as soon as the break began I walked over to the bar to meet the likes of Paul McTaggart, Niall Farrell and Alex Ferguson who had all busted earlier and were now grinding the drinks menu.
Paul said they were going to a great steakhouse about 7 minutes walk away. With 60 minutes for the dinner break it would be cutting it a little fine, but I really wanted a nice sit-down meal rather than some junk food, so I was up for it.
There ended up being about 15 of us in the group, and with a combination of some blatant lies about how far away the restaurant was and drunk people leading the way, it took us over 20 minutes to get there.
The restaurant was packed and there was no way we’d get served quick enough to make it back to the tournament in time. Regardless, I wasn’t about to spend £30 on a steak dinner that I’d have to force down my throat in 5 minutes. So myself, Ross Gaff and Brett Angell who were also still in tourney decided to GTFO and head back the way we came, at this point in the pissing rain.
We ended up at McDonalds. Yes, I went out looking forward to and expecting a delicious steak dinner and what I got was a Mucky D’s. Huge beat.
Shortly after the dinner break, my table was broken. Just what I wanted, as it was a tough table with less than it’s fair share of punters. Unfortunately my new table was just as bad. I looked around and saw a bunch of youngsters, then sat down between Kevin MacPhee and Sebastian Saffari. If that wasn’t bad enough, Mat Frankland had drawn the same table as me and sat down opposite me, again! Mat commented that he wouldn’t be happy with this table in an EPT, never mind a UKIPT.
With a £770 buyin and 1099 runners there must have been some bad players in the tournament, I sure as hell wasn’t getting a chance to play with them though.
By the final level of the day I still hadn’t played a big pot yet but I had over 50k chips in front of me, from a 15k starting stack. Decent grinding. Then, at 1am I decided to undo a good days work by losing half of my stack.

I had KK under the gun and raised. I got FOUR!!!!! callers. The flop came down T32 with two spades and since one of my opponents held 22 I could easily have went broke but an A turn and 3 of spades river gave me enough reason to fold when he put me all in on the river.

During an afternoon of shopping on Oxford street I used the PokerStars Mobile app on my phone to conveniently register and pay for the first side event of UKIPT London later that day.

It was my first visit to the new PokerStars Live card room inside the Hippodrome casino at Leicester Square. (The main event was being held at the Victoria Casino on the other side of town).

The London Hippodrome is an old building with a lot of history. As a theatre, at the beginning of the last century, Charlie Chaplin starred in the first ever show there. It later became a nightclub with live performances by the likes of Diana Ross & The Supremes, Judy Garland, Shirley Bassey and The Temptations, Frank Sinatra, Sammy Davis Jr, Dusty Springfield, Tom Jones, the list goes on and on.

The Hippodrome was converted into a swank new casino last summer and only last week the new 24 hour PokerStars Live lounge was launched.

The card room is up in ‘the gods’, the highest floor in the building, while the old stage area provides expansion for more tournament tables.

I played the first side event of UKIPT London, the £110 Hyper Turbo Deepstack event.

The field was extremely soft. It was about on par with an $11 Sunday Storm online, where if you have more than 2 competent players at your table then you’re running bad. Players were limping garbage, calling raises out of position with junk hands and giving off massive live tells. Fun.

I ended up going pretty deep but when the average stack size got to 8BBs I couldn’t find a hand better than bottom 20% to shove with, or people would shove before me, and I ended up blinding down from 15BBs to 5BBs, only to get it in with T8o vs JTo and lose. A situation that almost never happens to me in turbo tourneys as I will find a spot to get it in rather than blinding off, but not much you can do when you go a couple of rounds without seeing a card higher than a 7.

I finished 12th for £300. The payout process took under a minute. I just handed them my PS Live card and asked for it to be transferred back to my PokerStars account and that was that. It’s really convenient playing PokerStars events in that you never need to handle any cash, buying and cashouts can all be done through your PokerStars account.

With only a 15BB stack I sat down at a table full of pros and was drawn to be the big blind for the first hand. So that was a bad start. No problem though, one double up and I’d have a stack I could work with.

I folded the first 3 hands then open shoved QJo from the CO to take down the blinds and antes. A few hands later I was UTG with pocket 8’s and open shoved. A guy in late position with a slightly bigger stack then me shoved behind me and flipped over KK. K on the flop, not even a sweat. GG.

As I walked away I was called back, as it wasn’t clear that my opponent had me covered. Right after busting all I want to do is get as far away from the poker room as possible, so it was painful to stand there as the dealer counted out the stacks. After counting he said “Yep, he has you covered by 200 chips”. And that was that.

Unfortunately it was pissing down with rain and 3 degrees so I gave the sightseeing a miss. Despite countless visits to London I’ve still never visited the likes of Trafalgar Square, Buckingham Palace and Big Ben.

Instead, I spent my free time at the theatre, because I could sit on my ass and be entertained yet still be doing something that I couldn’t do at home.

Over a few days I saw Rock of Ages, The Lion King, Woman in Black and Let it Be. 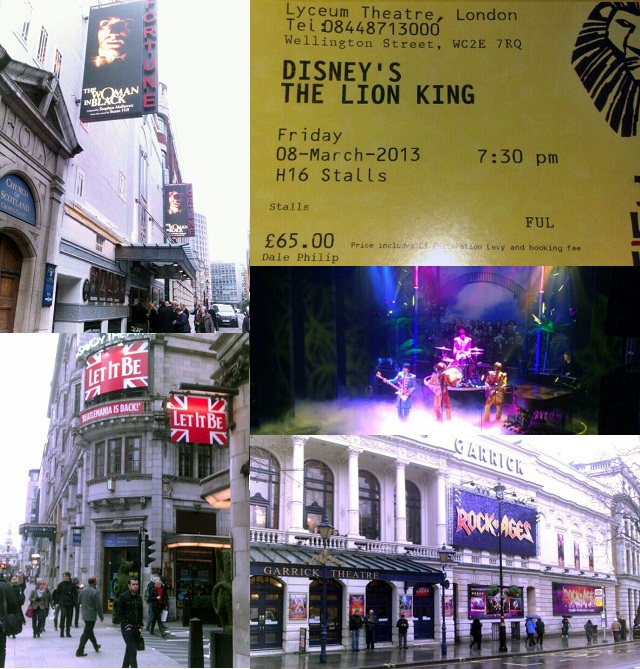 As for food, well unfortunately I didn’t make it to any of London’s fancy Michelin star restaurants. I did, however find somewhere with excellent food that was reasonably priced (by London standards) only a short walk from the Hippodrome.

Cafe in the Crypt is a self-service cafe down inside an 18th century crypt. I got a quarter roast chicken with stuffing and vegetables, a plum and berry pudding with custard and a bottle of diet Coke for under £15. It was very, very nice (the venue and the food) and being self service it meant no waiting time, so an ideal place to eat for someone who is on their own and/or in a hurry.

This is the part of the blog where I would have talked about how much fun I had at the PokerStars UKIPT / EPT London party at top nightclub DSTRKT. Unfortunately I made the donk move of going for a short nap before the party, only to wake up at 1am. Epic fail.

I’d been planning on meeting lots of different people there, some I’ve never met in person before but have known online for years. And just thinking about the lost value from all the free drinks that I would have consumed during the 8pm-11:30pm open bar period is tilting me extremely hard.

The next UKIPT season will begin in June with a summer holiday to Marbella in the south of Spain. See you there amigos. Scottish and Irish lads, don’t forget the Factor 50.