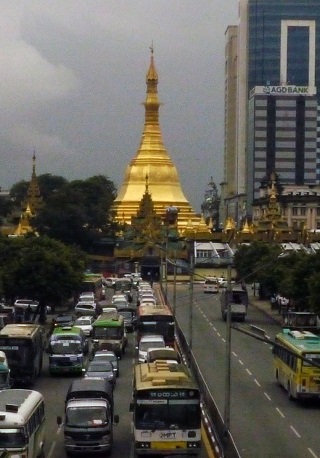 Since I don’t want to get a job, go to school or marry a Thai girl, I’m still living in Thailand by means of back-to-back tourist visas. This requires me to briefly leave the country every 3 months. I usually try to make the most of these visa-runs by visiting other parts of Asia that I haven’t been to yet and which interest me.

The only nearby country I hadn’t visited yet was Myanmar (formerly Burma). It was at the very bottom of my list but after more than 5 years of visiting other neighbouring countries multiple times, it was about time that I checked it out.

Like the budget airlines in the UK, you have to go to some spartan departure gate that’s all the way at the ass-end of the airport and then spend 15 minutes being transported like cattle to the plane in an overcrowded bus.

But unlike the budget airlines that we’re used to in the UK, Nok Air gives you free checked-baggage, a pastry snack and water and in-flight WiFi included in the cheap base fare.

This is a good tip for anyone who is going to be traveling around Thailand or to neighbouring countries. Nok Air is almost always the cheapest and provides a much better service than Air Asia. It usually doesn’t appear on booking sites like Kayak so you have to go to their website directly when looking for flights.

In Myanmar US dollars are accepted almost anywhere. Sounds convenient until you realise that the standard rate that retailers charge, of $1 to every 1000 Kyat, is overcharging you by about 15% on the interbank exchange rate. They also won’t accept US notes with even the slightest crease or mark on them.

Having done my research in advance, I bought some Myanmar Kyat at Super Rich in Bangkok for only 0.5% off the interbank rate before going..

The most notable thing I observed on my taxi ride from the airport into the city was that the majority of men were wearing a Longyi, which is something like a sarong or a casual kilt. Well I’m Scottish, so get it round me.

The first thing I did in Yangon was procure myself a Longyi and I wore that Burmese kilt the whole day while I explored the city. I got plenty lot of strange looks from the locals.

Some people laughed at me and others gave me nice comments and wanted to take photos with me. It’s probably how I’d react if, for instance, I saw a Japanese guy walking around Edinburgh in a Scottish Kilt. Something you may only see once in your life, if at all.

The only real interesting attraction in Yangon is Shwedagon Pagoda. I think I’ve seen enough temples in my life that I’d be totally cool with never visiting another one ever again, but options for things to do were very limited so I went anyway.

I arrived just after midday when it was scorching hot. They made me remove my socks and shoes at the entrance to the huge complex and right there I knew I was in trouble. The floor was completely made of marble and every step burned the soles of my feet. I tried to stick to the shadows but it was impossible. To get from one area to the other I had to run as fast as I could to minimise the time my feet were in contact with the ground. And because of that, sweat was pissing out of my pores.


It is a beautiful place but the profuse sweating and burnt feet took away from the experience. If you plan on going, learn from my mistakes and visit in the evening instead.

I only stayed in Yangon for one night, picking my new Thai visa up from the embassy the next afternoon and flying back to Bangkok. But that was 3 months ago. I returned for another visa run last week, knowing how quick, cheap and easy the trip would be.

I noticed that there was a small railway station near my hotel and did some research on where it goes. It turns out that it was the Yangon Circular Railway line that is used for people to commute cheaply into Yangon from the surrounding suburban areas. It goes through 39 stations on a 46km loop and takes 3 hours to get back to return to where you boarded.
This seemed like a fun way to spend the afternoon and at only 200 Kyat (0.12 GBP / $0.16 USD) for a ticket, the price was right. 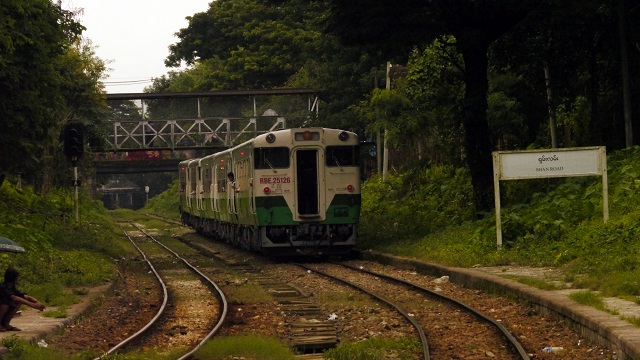 They leave the doors on the train open during the ride so rather than take a seat I just stood in the doorway, getting an unobstructed view of the scenery, the breeze in my hair and a bit of a thrill as I was hanging out superman style and having to pull myself back in when there were obstacles that could kill me.


I did this for the full three hours. Never got bored.

At almost every station there are hawkers selling food. Some of them would jump on the train, and walk down the aisle selling tasty snacks such as samosas and chopped pineapple. 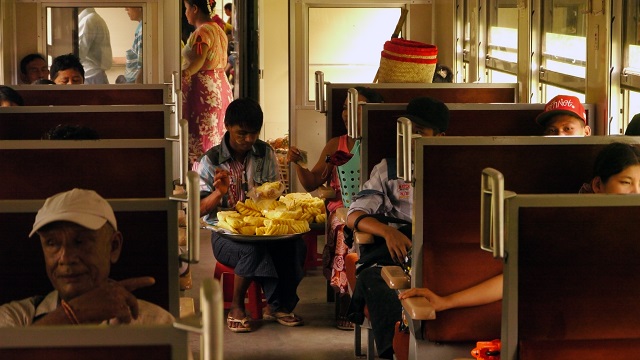 Like I said, never boring, always something interesting to observe and think about.

The rest of my time in Yangon was spent eating.

Earlier this year a photograph of mine won me $2,000 worth of Shangri-La Golden Circle points in a social media competition that they ran related to loyalty. 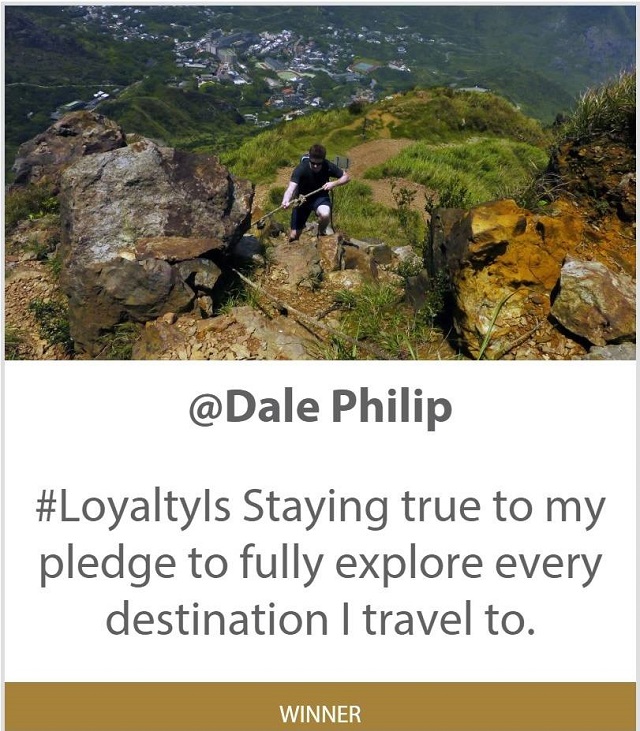 I’m planning to spend the full two grand on food rather than hotel credit and have been indulging regularly at the luxurious buffet at the Shangri-La Bangkok. There is also a Shangri-La hotel in Yangon so I made sure to pay it a visit on an empty stomach.

The national dish of Myanmar is Mohinga which is a rice noodle, catfish, curry soup. There are hawkers selling it on the street for 500 Kyat ($0.42 USD / 0.32 GBP) but my first time eating it was the $11 USD version at the Shangri-La. Priced in dollars rather than the local currency, I’m sure, because only foreigners would pay that much for a bowl of Mohinga.

Curry never photographs well, but here it is anyway: 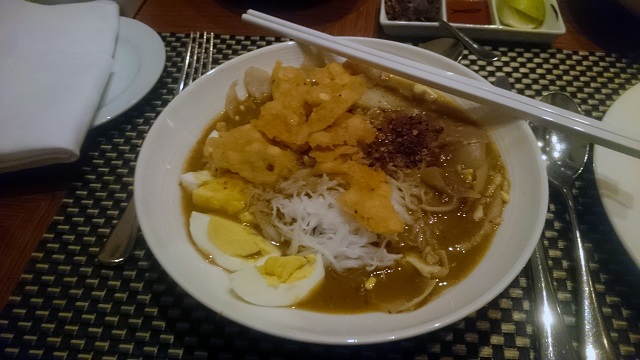 It was incredibly delicious. The broth was very rich, with a unique flavour so I don’t have anything I can say it tasted similar to. I’d happily eat it regularly if I lived in Myanmar.

I balanced the high class food at the Shangri-La with a lot of cheap street food when I was exploring Yangon. It’s very much like Bangkok where you could just choose any random street to walk down and more than likely there will be some delicious food.


Myanmar is close to Thailand, China and India and these countries all have an influence on the cuisine. One of the most common street food snacks is samosas, which are irresistible. To be honest, any food that is deep fried and cheap is irresistible to a Scotsman.


After already eating way more than my fair share of samosas during my stay in Yangon, the day I checked out the hotel they had samosas at the breakfast buffet. If cheap samosas were irresistible, what were unlimited free samosas? They were a one way ticket to a full, aching belly that I was rubbing all the way to the airport.